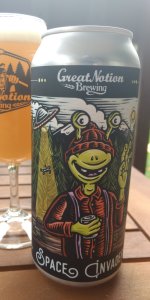 Notes: This Southern Hemisphere IPA is brewed with a massive amount of Galaxy hops from Australia. Beware - HOPS ARE ATTACKING!
View: Beers | Place Reviews
Reviews: 11 | Ratings: 68 | Log in to view all ratings and sort

Little known fact: the Pacific Northwest has its own corollary of #TeamGreen v. #TeamJulius which wasn’t quite obvious before as it is now. Hidden behind the fame and star power of Juice Box/Jr., Ripe, and Double Stack, Space Invader was doomed to fall to the second team of Great Notion Brewing Northwest Conference All-Stars; that is, until its inaugural batch from the new brewery came out and totally blew Juice Box out of the water.

Don’t get me wrong, I’m not succumbing to #TeamSpaceInvader just yet. For some reason, this past batch of Juice Box sacrificed a lot of its sharp hop-driven edge for the sake of… well, juice, while Space Invader was somehow endowed with this new dimension of sharp, explosive tropical hops flavor which seemingly lied dormant in previous batches I’ve had the opportunity to try. Or it could just be that I always got too excited whenever a Ripe/Juice Box variant came out and reached straight for those instead of giving Space Invader a well-deserved second try.

Gratuitous embellishment and personal anecdotes aside, I haven’t seen this kind of masterful and exuberant display of tropical, Southern hemisphere hops since Monkish Brewing’s Swinging Sword Lecture. Whereas the pineapple character in the Rockwilder-inspired SoCal Galaxy-Enigma bomb was more incisive and sharp, kind of like that slight metallic/acidic aroma mixed in with pineapple that you get the moment you open a can of Dole pineapples, the Galaxy-Enigma combo in the Galaga classic-inspired brew is more rounded and sweet, kind of like piña colada, but with maybe half the rum.

The pineapple is initially complemented by a grassy vegetal, borderline onion/garlic-like earthy constituent, but this seems to fade out of the picture pretty quickly, allowing for the pineapple to settle in for the long haul. If you’re wondering why I’m not writing separate sections for aroma/flavor like I usually do it’s because (1) they’re almost indistinguishable with this beer, and (2) everything is after a 9-hr workday on a Monday.

Medium-light body with a soft, fluffy, yet at the same time, sticky consistency. Initially creamy, but errs on the side of clean and juicy as it traverses further down the palate and into the esophagus. A gentle, yet not entirely negligible amount of carbonation accompanies this brew; for the sake of clarity we’ll say it’s somewhere between medium and low.
⠀⠀⠀⠀⠀⠀
#TeamSpaceInvader may have won this first round, but I’m about 98.3% sure #TeamJuiceBox isn’t relinquishing its true and righteous place at the top without a fight. If not, there’s always Ripe.

Can dated 11/13:
Perfectly uniformly cloudy with a fluffy cloud of eggshell head. Lacing is strands of cotton caught on unseen burrs in the glass.

Nose of an Oates malt and guava mainly, with some papaya as well. An accent exists, like some candied fruit, but I can’t tell if it’s more of a sweeter citrus note or pineapple.

The flavor, unfortunately, doesn’t deliver the notes from the nose too well. The guava comes through a thicket of oat/malt, but is drenched in the flavors of the barrier. A thicker than average feel is less creamy than it could be thanks to a bite from from the carbonation/yeast. There is a little dry wood pine that I get in a lot of the hazy IPAs that I often feel is a combo of hops and oat, and a little hint of grapefruit that sneaks in with warmth.

I am not certain there are oat flakes in this, but what I get is similar to what I get in beers that have that added. It seems to mute the hops here. Even though this has a light bitterness in the late taste, it’s more of a thick, drinkable balanced NE IPA.

Flavor follows the nose. Mango, papaya, citrus, and pineapple juice. Hop taste is also floral, and a backend bitterness doesn’t quite balance the sweetness, but you could tell from the jump this wasn’t about balance.

Medium bodied, juice mouthfeel with a slightly bubbly carbonation on the backend. The hops really come through as the beer warms and coates the mouth.

A great NE IPA from the west coast. Soooo incredibly fruity. Mine was canned on 5/10/18, so it’s not the freshest as the hops could be, but it’s still awesome. I’d like to try this fresher to see if the hop bitterness is more pronounced.

A creamy, balanced brew; not best in show but damn fine.

Tidy. Good example of a Pacific riff on the NEIPA that counterweights the tongue-rush with level-headed melon-y detail. On the lovely patio of the brewery. Dug the IPAs more than other styles here (which I found a bit crowd-pleasing and thin).

On tap at GN. Pours a opaque straw yellow to orange. Orange juice like as one would put it. Bright vibrant soapy white head. Nose is that of hitting up the fresh fruit bar on a cruiseliner in the morning. Notes of mango, pineapple, guava and melons along with light floral. Taste is what draws me to all beers with Galaxy hops! Vibrant tropical fruit like on the nose as well as generous amounts of citrus pith. Light layer of floral but tropical fruits and citrus are the stars. All the juicyness is positioned on a nice bed of malty sweetness. The pungent lightly bitter finish cuts the sweetness from the malt leading to a well balanced beer. This one has that huge creamy mouthfeel, milkshake like. Full bodied with a nice fade to a semi dry finish.

It smells great, as hopefully any Galaxy hopped beer would. Just barely unripened guava and papaya to the max.

Full bodied and creamy, but not too creamy, pretty balanced but just barely favoring bitter, and rediculously easy to consume. That went way too fast.

Overall, another outstanding IPA. These guys really know how to please any fan of the style(s), and this one is right up there. Cheers.

some of the new england style juice bomb hoppy cloudy beers are so messy looking, but this is one of those thats cleaned up enough for me. its hazy sure, even thick in the light, but there arent chunks swimming around, and its not milky when its in my mouth, its dry and frothy, quite the opposite of a lot of these beers, this doesnt taste unfinished or incomplete to me at all. shared generously from the crowler by a fellow who was a perfect stranger when this was opened, so for all the generally lousiness thats around in the beer scene these days, theres still a whole lot of good and cool happening too. the aroma and flavor on this is amazing, has to be some aussie or new zealand hops featured, its not unfamiliar, but its freshness and pungency are new, cutting edge, and just crystal clear in this hazy form. its really incredible. sweet pineapple, lemon curd, honeydew melon, white grape, its all there. galaxy and citra maybe? hard to place exactly, but its juicy and fresh and over the top. interestingly, this isnt bitter in the least, some slight pine or grapefruit working its way in later on, but its never bitter like most ipa, it stays more in the aromatic and flavor realm, low alpha seemingly, just easy for what it is. not creamy feeling, but starchy and substantial enough, well carbonated and drier towards the end. its really lively beer, a lot better than most in this category, and even as one who is partial to the clear classic ipa, i have a lot of love for this one. thanks for sharing man!

This pours hazy as a SF night is foggy. Juice bomb. Orange intensity. Fantastic brew. Welcome surprise from a friend, and I couldn’t be happier for it.

This is the next big thing.

Again, another Triller of an IPA. Stood out with Ripe and Juice Jr. as the best IPAs on tap.

Space Invader from Great Notion Brewing
Beer rating: 95 out of 100 with 68 ratings