All The Stars
Great Notion Brewing 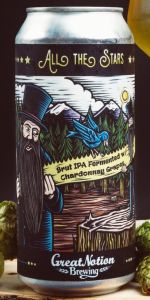 Notes: All the Stars is a Brut IPA collaboration with our NW neighbors, Boedecker Cellars. This champagne-like ale was fermented on Boedecker's chardonnay grapes.
View: Beers | Place Reviews
Reviews: 2 | Ratings: 6 | Log in to view all ratings and sort

14+ years of reviewing beer on here and this was the first American Brut IPA that I've ever had, let alone had a chance to post about on here. I know that I traded for this but can't remember where or when although it was probably while in line at Other Half or with one of my best friends here in Jersey. I enjoyed this beer and how different it was as it reminded me of white wine and light wood, with some hops thrown into the mix!

This had a nice, golden hue to it as I poured it out with the brightness and clarity being quite apparent from the get-go. Not a lot of head topped it off as it retreated quickly like seam foam as I was pouring the liquid out, and the lacing left behind was hardly anywhere to be seen either. Lots of champagne yeast, white grapes, and wood in the muted nose as the taste was just as woody, funky, and full of yeast. Enough skin and tannin was in here too as this felt like, not too fruity, and lively enough when it came to the carbonation.

This didn't feel like it had much booze in it at all although it was certainly there, as I felt some warming take hold before I finished it off. Hard to rate this beer since I never had anything of this sort before but it was enjoyable, easy to quaff, and full enough for me. Canned on 11/05/18 with "DRINK NOW" written above it, that was written near the top of the can and not on the bottom as is the case with nearly every other beer that I have. Regardless, this was fun and had me wanting to have more beers that fell into this category!

dontcha love people who just add sh!t for the karma without actually trying it, knowing the abv, or even certifying that it became released...? looks beautiful on the pour; hazy but not NEIPA hazy.... so 'foggy'? pretty either way! phosphorous yellow... Dow bathroom cleaner aroma mixed with grapes.... slight grape juice flavors, dry.... decent! nice for 7.5% and easy to drink although with a funkiness at the end which makes it almost not so easy. or maybe not for more than two at a time before switching over to something else? looks awesome in a chalice held up to the light! definite grapeyness!!!! interesting style; gonna take some getting used to for it to endure....