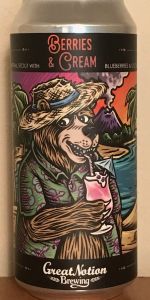 Tasted medicinal with limited berry flavors. Not a super fan of this. Weak especially compared to lots of the other offerings I had at the brewery that night.

I don't often write reviews but this was very difficult to drink. I think great notion makes nice stouts but this tasted way too medicinal to be enjoyed and the berry flavor didn't work at all. I think it was a swing and miss for great notion unfortunately on this one

blueberries and coconut cream in this positively over flavored big stout. where the huge flavors of additives have made some great notion beers for me in the past, they kind of ruin this one, and even though its just a pint can, its absolutely a beer to be sharing around at least a couple of ways. its a big flavorful stout underneath, smooth and seemingly high quality, but its hard to appreciate with all the intensity of the berries, which dont taste natural to me at all, more like candy and jelly, grossly sugary even with no lactose in the beer enhancing that (thank god). the berries are so intense in the nose and the taste that its tough to really gather anything else from the rest of the beer. it reminds me a lot of those markers you smelled when you were a kid, and that blueberry syrup from dennys or perkins. the coconut cream is such a cool idea, and it had me so intrigued here, probably amazing with real blueberries, but its lost a lot to the fruit in this one, its smooth and creamy in texture overall so its contribution is still evident, even a little slick and fatty feeling, but the flavor i looked forward to so much isnt really there. its so sugary its hard to really drink, and that over the top blueberry stays on the palate even though another beer after this one, i tasted it still even this morning, which i generally do not dig. we couldnt finish this one, too sweet, too forced. still a neat idea and not a bad beer in any way, just that stout this flavored rarely does it for me personally. some may love this, but i could hardly tolerate it, even as much as i love the ingredient combination and appreciate their potential in a beer like this...