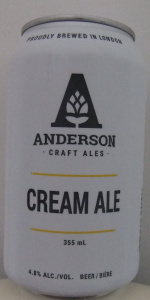 Notes: Brewed in the traditional style of a pre-Prohibition ale. Golden coloured with a clean, refreshing taste and a crisp, dry finish.

One of my current favourites, all good things coming from this brewery This is an excellent cream ale, slightly sweet, no bitterness, malt forward
April 12 2020

Pours a foggy golden-blonde colour, with one finger of soapy white head receding over the next two minutes or so. A thin collar of bubbly froth is retained, with some scattered swaths of lace being splattered against the inner surface of the glass; not much to look at, really. Wet earth and hay, fresh straw and green, leafy hops are apparent on the nose, which also features a clean, grainy, somewhat biscuity pale malt backbone. It's a subtle aroma, as you'd expect for this style, but one that I find quite enjoyable nonetheless.

Nothing too fancy here - just a straightforward, no-nonsense session ale. Grainy pale malts, together with doughy biscuit sweetness and faint suggestions of apple, characterize the front end of the sip. Restrained flavours of grassy hay and leafy hops join in towards the finish, which is clean, crisp, and followed up with an unerringly dry aftertaste. Light-ish in body, this cream ale has lively carbonation that prickles the palate aggressively at first, but softens with time, resulting in a smoother, creamier texture. In any event, it's extremely easy to drink.

Final Grade: 3.98, a B+. I can't claim to have tried all that many cream ales - I've only got a dozen or so under my belt, and that's after a decade of beer-drinking experience. But for what it's worth, Anderson Cream Ale is one of the best I've tried thus far. No, it is not an exciting beer, nor is it the sort of brew I expect a plurality of BAs to have a great degree of excitement for, but that comes part and parcel with this style. Well crafted, and worth keeping in the back of your fridge - even if it's not really your cup of tea, this brew's unobjectionable, familiar nature makes it the perfect offering for your more macro-minded acquaintances.

Anderson Cream Ale from Anderson Craft Ales
Beer rating: 3.8 out of 5 with 7 ratings