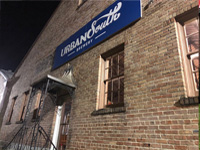 This spot was a pleasant surprise at the tail end of our long distance beer crawl. I don’t know what I was expecting, but it wasn’t really all this space, color, variety, and just how at home a giant warehouse could make you feel.

People hung around inside and out doing their own thing--drinking at a deliberate pace, chatting, having bachelorette meetups, waiting for a food table to set up, playing video games, and more--yet it never felt crazy busy despite having probably three times as many customers than the other stops we made this day.

I've seen Urban South on so many draft lists and at so many festivals, and I've been to New Orleans six times and Nola Brewing itself more than a couple times, among others, and I even stay a short 15 minute walk up the street from here, but I’ve somehow managed to only ever have one beer by them, and have never physically been here at all until this year. Like, really?!

So seeing how well established they were, let alone their diverse taplist, was kind of a mindfuck. From classics, to current trends, to the absurd, they had it all, and nothing was bad, although one or two were quite weird. We liked it enough that we came back a second time, and I even bought some swag.

Normally I’m ready to get home at the end of a beer crawl, so they had an uphill climb in my belly, but they made it to the top just fine.

Reviewed by OompaMentor from Georgia

4.14/5  rDev +0.2%
vibe: 4.5 | quality: 4.25 | service: 4 | selection: 4
Davo, damn, um, ‘Mr. LeBoud’, he is a cruel, cruel man. He maketh me want to lie down after eating too much and then leads me on a many mile walk to a brewery. A drop in for a quick beer at CochonButcherCrazytown, and then under the overpass through the encampment, past the supposedly abandoned power plant where you know some X-Filesy shit is going on, and out to Urban South. Definitely got my steps in today…

Up the ramp and in; it’s a large hanger space we’re not seeing the half of. Brick & concrete walls, arched corrugated ceiling with a 3 prong spinny fan, and concrete floors. Flouro lights on the ceiling rafters & strung white lighting in between. There’s a disco ball up there, too, and Beer Army Beer Wars, Can Can Awards, & US Open Beer Championship medal banners hanging on one end. Some 2 dozen+ alt colored picnic tables out across the floor in rows horizontally & vertically, with some hightop long shareds thrown in for good measure.

The inside backside wall holds a mostly service bar (get your beer, then stand clear). 22 taps in a row on the barback coldbox wall, most are unused (we’ll get to that). Draft selections displayed above on LED boards (beer, style, ABV, IBU, & pricings). Flats to each side showing Basketball just now, and a large lit logo sign atop. 4 door can cooler to the left with to-go pricing on a board above, and swag displayed on a wall of pallets to the right.

Only 9 beers available today, and it’s a bit difficult to ascertain what’s draft and what’s canned (Holy Roller, IPA, 6.3%; Grapefruit Holy Roller, IPA, 6.3%; Coop’d Up, Tart Farmhouse Ale, 5.5%; Blackberry Tart, Tart Farmhouse Ale with Blackberry puree, 5.5%; Carpe Rose, Rose Cider Ale, 5.5%; Paradise Park, American Lager, 4.5%; Charming Wit, 4.9%; Ca Phe, Vietnamese Coffee Stout, 7%; Lime Cucumber Gose, 4%). The Lime Cucumber Gose was refreshing & excellent, and the Blackberry Tart was just perfectly that. And the Holy Roller IPA was good, too. Phil phoolishly went with the Grapefruit Holy Roller IPA which overwhelmed, as grapefruit does. Lime Cucumber Gose & Blackberry Tart for the win. There are, in fact, 6 beers on tap and 3 in can. They say that production leading up to Mardi Gras wiped out draft. A good problem to have, me thinks.

At one end of the room, a grain silo, a ‘happy birthday’ bouncy house read: absurdly kid friendly), and a game zone (pool & foosball tables, and 7 arcade games, including Phil’s Golf Game 2009 – Live, which Phil claims not to be working). Bar counter space in the game zone and light art. The bouncy house obstructs good views of the brewery, although I can see tanks to the ceiling back there.

Down on the other end, a brewery trailer with colorful strung lights, pallets of cans stacked & many barrels racked, a few corn hole boards in play, and a crawfish boil set up (oh yes, we did). 2lbs of bugs and sides for like $12, question: are you fucking kidding me? It was absurd. Just amazing, messy as all hell, but amazing. I should have filled my pockets with uneaten potatoes to go.

To the outside frontside, flats on this wall, too, and open bay doors. they are beaning up a hearse; literally gluing tens of thousands of different colored beans in skull, patterns, and words to the ‘world’s first and only bean hearse’ that which will lead their dead beans parade on Lundi Gras. It’s seriously badass.

Above the bathrooms, they have some previous parade pieces (Octopus, Cheshire Cat), a trophy and some sixtels, which have employees pics on them and are in recognition of such things as ‘welcoming’, ‘better every day’, ‘honest’, ‘collaborative’, & ‘fearless’. Saints 2018-2019 schedule board near there with W/L, date, time, opponent, and score. And a book & magazine rack.

Beers were good, mind you, I would have liked to have seen a larger selection of ‘em, but that’s what happens when you visit New Orleans 3 weeks before Mardi Gras. And I know it’s a pop-up and not their own food proper, but the crawfish boil was ridiculous. And the bean hearse, that’s just madness. You know, the place is just fun. Live once, bean forever.

Reviewed by Spacejamflam from Louisiana

4.43/5  rDev +7.3%
vibe: 4.5 | quality: 4.5 | service: 4 | selection: 4.75
A beautiful taproom infront of a wide open warehouse brewery, Urban South is incredibly homey. Strings of lightbulbs cobweb the roof and the seating is mostly painted picnic tables. They have tasteful merch, some on-wheels show pieces for parades, and some beautiful views of across the river.

As for the beer - they have a fantastic selection and it's all of the utmost quality. They cover the basics with lagers, pilsners, Belgian wits, and a flagship American IPA, but they also have fruity kettle-sours, hazy juicy IPAs, a Rosé Cider, and a variety of creatively flavored (and beautifully executed) stouts, plus lots more.

Whether it's at Rouses or the taproom, Urban South is quickly becoming one of my favorite brewers in the state.

Reviewed by PhineasMcClintock from Massachusetts

Rated by 1falcon from California

4.29/5  rDev +3.9%
vibe: 4.5 | quality: 4.5 | service: 4.25 | selection: 4
One of the new breweries in the Crescent City. Just get on Tchoupitoulas Street after the I-10 crossover and you can't miss it. Around 10,000 square feet with plenty of room to expand. These guys are very friendly and aggressive with their canning and output. You can get a 4 flight sampler for $11. Plenty of picnic tables for hanging out. Bring the kids and a dog or two. Always a food truck on the street. Urban South does a lot of theme gatherings and charities so get on their mailing list. A great vibe here for such a new place. Very organized. Go. Drink. Enjoy.
Jan 10, 2017
Rated: 4 by Butchnasty from Louisiana

Reviewed by BalancingBrooms from California

3.97/5  rDev -3.9%
vibe: 3.75 | quality: 4 | service: 4 | selection: 4
Beer selection and service is great. Probably the strongest core lineup in NOLA in my opinion. It can be pretty busy and loud as families fill up the seating early in the night and then the younger crowd moves in later. Seating is mostly park style tables indoors which is open to the outside, but huge fans overhead keep it cool. Check the food truck schedule. Overall i come here often with friends and would recommend it.
Oct 17, 2016
Rated: 3.78 by kjkinsey from Texas