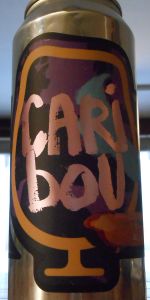 This was the last beer that my friend got me on his run up Vermont recently and it was on par with what I've come to expect from them. Easygoing, nicely balanced, and plenty juicy, this went down easily as it was the quintessential New England IPA that one would expect to buy in the Green Mountain State!

Not surprisingly, this had a hazy, muted golden hue to it that was uniform in clarity and silently radiant as the head that topped it off was plenty voluminous and long-lasting. The same couldn't be said for the lacing as that was quite sparse aside from a bubbly ring just above the middle of my pint glass. Tons of mango, gooseberry, dank hops, ,and a bit of melon, white grape, and papaya in the nose as the taste was equally dank, tropical, and slick. Plenty of pith in the taste as there was a good amount of nectar as the booze was spot-on in complementing those. Some bread and sweetness in the body rounded this out as the carbonation was present, but not strong, as the back was full of tangerine and bright stone fruit. There was no doubt that the Denali dominated here but that and the Citra worked beautifully together with the end result being a beer that was familiar up front but quite complex once I worked my way through it.

This was plenty strong, although it never felt it, as it would have been easy to open up another can had there been on here. Dated 11/3 with 'YOU CAN DO IT" written below it on the bottom of the can, this was a solid beer that would offend no one and turn quite a few people on to Foam at the same time. The artwork's nice but once again, the brew on the inside was equally as colorful and fun as this has me contemplating a run up to Vermont sometime next year...

Can from Jeff, thanks again.
Hazy light gold in color with a thin frothy white head that quickly dissipates. Orange and mango with faint earth and pine and a fairly sweet bready maltiness. Not bad.

A: The beer is very hazy to cloudy pale yellow in color. It poured with a quarter finger high white head that left lots of lacing down the sides of the glass and a short head covering the surface.
S: Moderate aromas of dank papayas are present in the nose.
T: The taste follows the smell and is rather dank with flavors of papayas and hints of mangos. No bitterness is perceptible.
M: It feels medium-bodied and rather juicy on the palate with a moderate amount of carbonation.
O: This beer is rather easy to drink considering its strength - only faint bits of alcohol are noticeable in the taste.

Pours cloudy yellow with a short head of white. Moderate retention and lacing. White grape, mango, and peach in the nose. Medium bodied with a creamy, soft mouthfeel. Juicy, ripe, tropical fruit on the palate. Grape with peach and oranges. Finishes fairly dry with minimal malt or bitterness and lingering citrus.

Look at the reviews below and know you need this nectar whenever you can get ahold of it. Foam is one of the very best in the land. ‘Nuff said.

Pours hazy yellow orange with 1 finger white head into my Tree house craftmaster glass.
Smell is citrus and savory.
Flavor follows with a sorts of citrus and a balance of vegetation in there. It’s not s straight juice bomb. Has an orange juice character. Very crushable for the abv.
Finishes just dry enough.

Had on tap. First beer by foam I have had, and it did not disappoint! Extremely hazy yellow body with white lacing and collar. Mango, pineapple, peach, clementine, papaya, and star fruit in the nose with lush and dank hops. Taste seamlessly brings the smell to life in a juicy and dank way, add a hint of coconut and lime to the flavors, incredibly balanced. Feel is what I hold neipa's to: super creamy in the juicy haze but has plenty of hop dankness and bitter sharpness, this even despite the sweet tropical fruit flavors. Impressive ale