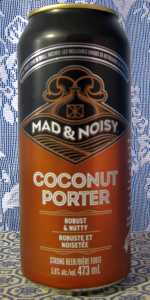 Pours dark opaque black/brown with a frothy mocha head which fades to a light active fizzy film moderately quickly. Little lacing during drinking. Aroma includes touch of coconut & vanilla among the toasted malt. Taste includes some sweet vanilla among crackery burnt malt, chocolate & coffee with the coconut being there but subtle enough to not damage the taste of a decent porter. Feel is smooth and just shy of being full ... just the slightest bit watery but it's very close. I wouldn't call it a watery beer overall. It's really better than I thought it would be based on the name and the many flavoured beers I've had which overdo it.

Pours opaque black with a clingy, compact espresso foam. tons of lace coats the glass on the way down. The aroma is of dark chocolate, caramel, coconut and roasty malts. The taste is malty and chocolatey with light coconut notes. Some citrusy hops in the back. The mouthfeel is full bodied with high carbonation. Light bitterness and lingering roastyness in the finish.

A nice coconut porter with good balance. The coconut flavor isn't overpowering. Worth a try.

Offers up a handsome dark pour with a nice tight head that provides some nice lacing as you go. After that, however, its pretty ordinary, without the more muscular characteristics of other porters. Very muted roastiness/charcoal, chocolate/coffee, malt sweetness, etc. Thin bodied with a slightly bitter finish. No really notable coconut flavours. Kind of a dull brew overall and not really a stellar example of a porter.

473 mL can from the LCBO; dated Nov 1 2018 and served slightly chilled. Reviewed from notes.

Pours an opaque black-brown colour, generating an inch of foamy, tan-tinted head that dissipates steadily over the next several minutes. A smooth band of lace is coated onto the glass, with a few more strands flung even higher up; a creamy, narrow collar is the only other remnant worth mentioning. It smells of toasted bread, nutty malts and caramelized sugars, with minor hints of chocolate, coconut and figgy dark fruit also coming through more clearly as the glass warms.

Not bad... as other BAs have mentioned previously, the coconut is slightly lacking. It tastes of caramel, dark malts, toasted bread and nuts, with hints of vanilla and chocolate also coming through, alongside a subdued note of toasted coconut. A hint of raisin comes through by mid-sip, with an herbal, earthy bitterness developing towards the finish - though it's not quite enough to effectively counter the generally sweet bent of the flavour profile. Medium in body, with relatively low carbonation levels that result in a smooth, soft, rather satisfying texture. Good drinkability; two of these in a row wouldn't be much of an issue, but after that I'd want to move on to something more compelling.

Final Grade: 3.54, a B grade. While I finished my glass without any fuss, I wouldn't consider Mad & Noisy Coconut Porter to be one of Creemore's better brews. The rather muted coconut presence is a bit of a problem - not for me, as I don't care for coconut all that much - but I understand why its scarcity would bother other folks. In the end, it's a decent, run of the mill porter that I suppose is worth a gamble, but it's not something I'd emphatically recommend.

If you call your beer a coconut porter, shouldn't the coconut be the star?

This beer is lacking g in smell, flavor and overall coconut presence. It looked okay, with a nice deep black brown color and a thin head. Smell is roasty and right for a porter but lacks the coconut. The taste is also roasty and then there is an off flavor that just throws the whole thing. Feel isn't bad, about right for the style.

So, if this were listed as a porter, it might be passable. But they call it a coconut porter and that means this severely misses the mark. Subtle notes of toasted coconut my ass.

The beer has a creamy beige head and the beer itself is black looking. 5.8% alc.

The aroma is dark brown bread and toasted malt, however it’s all quite subtle. I get zero coconut.

The taste is dark malt. Really the flavour is quite delicious.

This is called a porter but it strikes me as more of a stout.

The mouthfeel is medium and the beer is medium to full bodied with a dry finish.