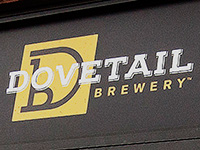 These folks make excellent lagers and I enjoyed several of them while in town...

The Helles was the star of the show but the Grodziskie was a close second...

You can smell the mash long before you get there... sort of tucked into a non-descript neighborhood...

Good selection of beers...I enjoyed everything I had here...

Tucked away in a residential neighborhood. Small, slightly dark taproom with unusual, curved beer spigots. Brick facade. Except for the wild yeast beers, made in the style of the Senne Valley (Lambics of Belgium), all beers are of German styles, a welcome departure from IPA land. Liked their Vienna lager.

Stopped in to try the place after work on Friday after just learning of its existence. In a row of semi-industrial spaces within quick walking distance of the train, it's a brick façade with a semi-modern, wood-lined area inside. Things weren't very buy to begin with, but the place started filling up and buzzing over the course of my couple-hour residence. The beers have a German bent, and they run the gamut with the range. Variable sizes are available, most of which are served in beakers, so that's a nice couple of touches. I was impressed with the overall quality of the beers, and went so far as to grab a bottle of the Flanders Rauch to share with a buddy and introduce him to the brewery remotely. The bartenders are all personable and knowledgeable, and I never waited very long to get a new order in. I didn't try any of the small-plate food offerings, but the ones that were delivered to patrons near me looked pretty tasty. Overall, I enjoyed my visit very much, and I look forward to hitting them up again once I get back into the office.

Enjoyed the beers a lot here. I was in the middle of a road trip when I stopped here, so I had been to a handful of breweries over a few days - these clean lagers were just what I needed as refuge from the hop bomb and pastry stouts of the world.

Space is nice if a little unremarkable. It was dark and I was there on a Friday night. Service, however, was kind of disappointing. A curly haired guy seemed to only want to talk to regulars or buddies, acting somewhat curt when I asked him a few questions about the beer. For such a friendly town, it was a huge turnoff.

Large space with lots of seating including a long bar and several tables. The quality of the beer here is top notch. Extremely well made lagers and traditional European styles. Everything I have tasted has been delicious. Service was very friendly, helpful and knowledgable about the product. They have great soft pretzels from a local bakery. Highly recommended.

i must have come here at the wrong time on the wrong day, as the spacious back area was closed for a private event, so the little taproom bar area in the front was super congested, we could hardly find a seat, and had to wait forever at the bar. im a patient guy, i know what its like to be on the other side, but they had three bartenders not look up for about 20 minutes, no joke, i just cant justify that kind of wait time to be noticed in a place, not even a "hey we are swamped hold tight", like no acknowledgement at all, it really turned me off, and when we finally did get service, he was kind of a jerk. if you have the best beer in the world and want to act like that, whatever, i still may drink it, but this kind of attitude for a middling dunkel? heck no! in any event, i ordered the hefe, which they were out of, so settled for the dunkelweizen, which was solid but conventional, familiar, and not particularly exciting to me. i could see the space being cool at a different time, its smallish and could be intimate without so many people in here. there were also about 20 dogs on the loose, which i dont mind, but at this concentration it was a bit of a zoo. i dont know, its just a brewery at the end of the day, nothing to go out of the way for i dont think, but i would like to check it out at a more mellow time and try some more of their beers, but our experience here was just not very good.

Great German brewery. All German beer styles and they knocked them all out of the park. I can't remember the last pilsner I'd actually recommend to a friend. And the sausages are fantastic! Make a point to stop here on your trip. Its also walking distance to 2 other breweries and a bottle shop.

Thoroughly enjoyed my visit. Great authentic lagers and European styled brews. Bartender was helpful and made great suggestions. They have a large bar and plenty of room to stand around. A bit off the beaten path, but another brewery is a few hundred feet away, making it a nice little area to stop.

Stopped by at 2 on a Saturday. 18 seat bar ringed by tables. Nice reclaimed industrial space, painted brick, copper and wood. 6 of their own on tap, all traditional European styles. No IPAs here. Pricing is 5/7 for 10/17 oz pours.

An excellent taproom just off the Brown Line at Irving Park & Ravenswood. Take the tour. They love talking about beer as much as brewing, it seems. These guys use old world techniques to brew some pretty amazing beers. Their Lager is fresh, creamy and complex...as best as I've had. Their Hefe is also very good. And the Rauchbier is my favorite take on a style I don't tend to like. No food, so bring your lunch and hang out. Looking forward to more beers in the future...in the meantime, I'll sit with my super fresh lager and revel in its awesomeness.

2021:
Taproom reopened for the spring/summer, with an outdoor biergarten through the end of summer. The absolute highlight of the year was the Secret Garden event during FOBAB weekend, when they had 16 spontaneous sour ales on draft.

2020:
Despite the pandemic and shutdowns, Dovetail has continued to crank out many new spontaneous beers from their barrel program, can several small batch and new seasonals, and pivot on the taproom closure with an outdoor biergarten. Highlights: 1st cannings of their Pilsner & Kölsch, 3 & 4 year Vignette blends, Cassis, Framboise Noire, and Cab Franc.

2019:
I've watched this brewery evolve over the last 3 years, and they continue to impress. Turning out both high-quality lagers and innovative spontaneous sour ales, which couldn't be any more different in style and production. Framboise, Special Collaboration Blend, Peche, Elderflower, Vignette, Czech Dark Lager, and Pilsner have been some of my favorites over the last year. Don't miss their spontaneous beers, especially now that their barrels are reaching maturity for blending. If only they could get some comfortable bar stools, maybe i'd love them forever.

2018:
Consistently great service and a solid rotating selection. Their spontaneous barrel-aged beers are starting to trickle out, be sure to check the bottle list. Petit Gueuze was a best beer of the year for me.

One of the more unique breweries in the city, putting out the best lagers in town, hands down. Dovetail's range and attention to detail puts them at the top consistently. Their traditional lambic-style beers even rival some from the Payottenland, which I can only say for a handful of US brewers. Watch this space for great things to come...

A recent review mentioned poor service due to crowds from a private event being held at the same time... sounds like a rare case of bad timing and being short-staffed. Private events there are held inside the brewery itself, and also upstairs in the "barrel loft" space. It's possible the bar crowd was spillover from the private event, though i've been dozens of times, and have never experienced that scenario. The taproom is always packed on the weekend, that's not the brewery's fault. If you want to avoid a crowd, go at off times, which can be said of any popular place. Passing judgement on a brewery based on a single beer is also a pretty questionable practice.

July 2016:
Took a Saturday tour, it was one of the best brewery tours i've ever been on. Dovetail isn't your typical brewery and their tour is anything but typical. Highly recommended if you like coolships, lambic barrels, unfiltered lager straight from the tank, water comparisons, and all the technical brewing knowledge you can handle. Obscure historical styles that emphasize quality over quantity. This has become a regular spot for me, and I can't wait for more beers from these guys.

June 2016:
Dovetail's tap room is currently only open on Fridays and Saturdays, the brewers themselves were working the bar when we went. Located on the corner of Ravenswood and Belle Plaine, just a block north of Begyle. There was a good sized crowd, and everyone was enjoying the beer.

The building interior is clean and industrial with high ceilings and cement floors. Plenty of bar & table seating, a few larger wooden tables for groups. They encourage you to order in or bring food, and also have pretzels and Landjäger sausages for sale. Food trucks occasionally stop here, and also at Begyle down the street.

Beer quality is very impressive, they opened with three traditional German styles that were top notch. An homage to the tiny regional breweries of Germany, who often only produce 3 beers at most. A limited and traditional selection like this is intentionally iconoclastic in the extreme beer era we find ourselves. Lager was my favorite, followed closely by the Rauchbier. The hefe leans to the drier clove-y end of the spectrum, and was perfectly drinkable. Hopefully a Weizenbock or Dunkelweizen is in the cards for the future.

Service was quick and friendly. The brewers were around, and chatting with customers. Tours are offered on Saturdays.

Waiting in the wings is a barrel program dedicated to producing lambic-style wild ale in the most traditional way possible outside of the Payottenland. Patiently excited for this development, and wish them the best of luck.

Dovetail is a great addition to North Center, the area is really burgeoning with quality beer establishments.