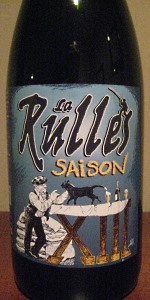 750ml bottle, the first new brew from this outfit that we've seen in Alberta in at least a couple of years - more rustic Belgian beer on Remembrance Day - seems about right.

This beer pours a hazy, dark tarnished golden amber colour, with three fat fingers of puffy, finely foamy, and thinly creamy ecru head, which leaves some chunky, high-altitude cloudy lace around the glass as it slowly and lazily recedes.

The carbonation is quite low and unobtrusive in its wan frothiness, the body a decent middleweight, and generally smooth, neither spice nor yeast nor hop deigning to interfere here, as such. It finishes just off-dry, the latent malt sort of brushing off that roasted character, the yeast snapping out of it (unfortunately), and that oft-mentioned veggie essence hanging on like a persistent groupie.

Overall, this isn't much like yer typical saison, no siree Robert - that toasted biscuity thing, while more or less agreeable in and of itself, doesn't exactly scream out 'paragon of the style'. Anyways, it's a big bottle, I've done my time in terms of cautionary exposition, so now I must enjoy the rest of this, while reflecting on family members who have served (my Mom, especially), and trying not to lose it when I eventually hear/read the verses of 'In Flanders Fields'.