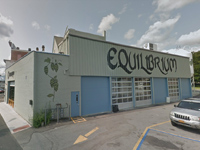 Nice and stylish exterior with the mural painted brew tank out there. The tap bar is in a circular form and the interior has good booth type, wooden seating and tables. The beer is good, though, not better than that.

A nice place, interestingly architected with a mix of outside and inside seating. A circular bar with booths ringing it, there’s room for a dozen plus groups; outside doubles this. 80+% of the beers on tap were A/IPA, with a couple sours and sweet stouts, and a single Pilsner. It could get a little busy, but the service was fairly attentive and definitely friendly. In a slightly separate area off the taproom is a place to buy to go offerings.

In Middletown. We may have poked fun at the town on the way in. And while we were here. And well after we left. And then for days afterwards. A Middletown, slap down, but here we be. Having arrived up here earlier than they opened, we one and doned at the other place, you know. And now EQ; not the old place but the new place. Looped and parked in a surprisingly nearly full lot this Sunday afternoon a half hour after opening. It’s a seemingly roundish building space on the back side of I don’t know what yet, but we will fact find, and find the facts we will...

Light clean wood horizontal plank round barn style room with vertical windows most of the way around the bar. A baker’s dozen 4-seat rectangular tables wrapping below them. Polished concrete floors shiiiiiny. Center hex cupola (it’s the raised part of the ceiling with the windows and giant slow spinny fan). Drop cluster 5 filament bulb spot lamps around it out over the floor between the bar & seating, and slight blended ductwork.

Omega shaped black marble topped bar in the center of the room, with a vertical dark slat wood base & and a foot box. Seating for 2 dozen on stools. Matching black marble octagon center bar island holds a large barrellike circular tap tower above; a dozen taps running both sides around with logo handles. Dead soldier bottles housed atop (with some random Drie Fonteinen Cuvee Armand & Gaston 3L bottles from New Year’s Eve displayed there to hatefully taunt us), around a center pole extending up high holding 6 flats mounted for views of at least 1 or 2 of ‘em from basically anywhere in the room. Currently alternating football & Untapped draft boards listing beer, style, ABV, untapped scores? (I guess them yellow dots are), and pricing for a shorty pour (4oz) and full pour (mostly 12oz but there is a single Triple IPA 8oz). Coolers below the bar with bottles to a go-go, and glassware shelved there all the way around.

Outside beer garden space wraparound holds 9 tables or so, an open area, and there appears to be some wood smoker action over there in the corner. The meats, yes, the meats.

Some shortys for me, please. Mobius, American Porter, creamy, kind of coconutty, in a good way; Pilsner, crisp, pleasant; Photon, American Pale Ale, tropical, pine; Full Circle, and then I had to look towards the hop. Which of the 7 hazy DIPA’s in the 8ish% range will it be? Spun the wheel, and landed MC2 for the WIN.

What else? What else? Well, there’s a kitchen coming, as is the canning line, although you can leave the latter elsewhere for now. Good crowd overall, save the kid at the bar trying to beer rule me. He was unsuccessful. Oh, have you ever been to Treehouse? STFU! You want to play war stories with a grown up? Go sit somewhere not here. Idiot. Darts and annoyingly loud cornhole (THUNK! THUNK! THUNK!) being played by the children you should have left home. Talked to the guy over there (me, pointing) in the ‘goods to go’ room, and bought a bottle of the Porter and something Farmhouse, too. There are bowls of pretzels on the bar; ours is nearly of the empty due solely to the consumption of. And they were playing Bjork when we arrived. Did you think I wouldn’t notice? This visit was shortly after the move to the new loc. Thinks I need another look in on.

Great stop. Thanks to Taylor for the tip.
No frills but lots of thrills.
Christine was a super nice server . Matt was a great bar stool Companero. Lots of fun and talk. Beers were excellent. Very good selection in bottles, cans and Crowlers for the road. Lively and fun even as late as I got there...a bit before closing. Very nice that there was no push to leave. Highly recommended.

Small taproom above the brewhouse of production brewery. Service bar seats 4 with plywood on barrels tables. The feeling of being in a makeshift clubhouse. 7 beers on tap, mostly pale ales and ipas, their thing.... done excellently.

a commitment to quality. mostly hoppy and while not tasting exactly the same the beers do have distinctive taste. a nice town and worth it to try killer porter and wilds

Equilibrium Brewery produces uniformly great beer and its can releases are very popular. The brewery makes an effort to simplify the release process by facilitating a bottle share each Saturday. These are very fun events and attract a lot of interesting and friendly participants. The current tasting room is temporary as the Brewery builds a new one several blocks away.

Basically just a brewery in a small town with a nice guy who is very knowledgeable about beer at the helm. They also have "merch" and glassware. Samples as well to see which beer you want.

Here for the first time for a can release. Four different beers available in 4 packs of pints and 6 different beers in crowlers. Incredibly friendly, knowledgeable and informative staff. Friendly people in line and scattered about the parking lot.

large and interesting spot, churning out some of the finest NE style IPa and DIPA around..friendly and informative staff...went for a release, great scene in the parking lot, enjoyed a few drafts in the smaller dedicated bar area, larger area with multiple tables, on a higher second level...younger crowd, pleasant atmosphere...def seemed like a place to visit for beer with the guys, for a date? eh not so much... go for the quality beer and fun environment, did not have a chance to explore the food menu, hope to upon the next visit...based on today's activities, I hope next visit will be in the near future..well worth your time to check this place out

Equilibrium Brewery in Middletown, NY
Brewery rating: 4.17 out of 5 with 6005 ratings