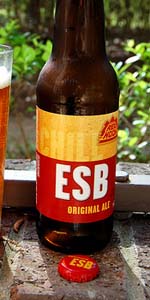 Notes: Brewed in the style of a traditional British ESB (Extra Special Bitter), we’ve been making ESB continuously since 1987, and it’s now the benchmark for the Amber beer category. Despite having “bitter” in its name, Redhook ESB is really not that bitter at all. This brew is all about the balance of caramel malt sweetness completed by spicy, citrusy hops.

3.69/5  rDev +7.9%
look: 3.75 | smell: 3.5 | taste: 3.75 | feel: 3.75 | overall: 3.75
one of the iconic early craft beers of the region, not sure how i have not reviewed it until now. it always brings me back to when this sort of thing was popular, alaskan amber, fat tire, those were the days. nice clearish amber tone to this one, good head too, thick and just off white with some nice lacing. it smells nutty and european, english and caramelized but not all that sweet, fairly well hopped for what it is too, although not particularly distinct in that regard. the flavor is balanced, i like the yeast element, this is dry and clean but there is some bready yeast character to it making it a little more complex and dynamic than a lot of beers in its field. the hops are bitter without having a ton of flavor, but they start early so its not just a finishing element. nice against the sturdy grain base thats not as rich or big as it smells, notes of toffee and honey but nothing too toasted or anything, this isnt heavy beer despite being malt forward. some appreciable mineral character in here, nice carbonation, and overall i think probably one of the better beers these guys make. legendary for a reason, underrated i reckon, a sturdy slightly americanized take on the style, but i like this beer, its a classic.
Oct 29, 2021

3.73/5  rDev +9.1%
look: 3.75 | smell: 3.75 | taste: 3.75 | feel: 3.5 | overall: 3.75
Look: Clear light amber red with a billowing off-white head that pillows up and slowly recedes, leaving great lacing behind
Aroma: Floral hops, freshly baked bread, earthy hop notes, and light wafts of caramel
Taste: Follows nose well but much more pronounced caramel malt and floral hop notes. Earthiness and even some light spicy hops along with rich breadiness hold down the middle and finishes with flowers and caramel-slathered bread
Mouthfeel: Full bodied, medium-high carbonation, very clean, surprisingly smooth throughout, and a light tongue-prickling finish
Overall: This is delicious stuff. I hadn’t had one in awhile but this beer helped introduce me to the ESB style many years ago and glad it is still quite enjoyable today. Well balanced hop and malt, along with a great feel come together to make this beer the tasty treat it is. A classic and definitely recommended for anyone interested in trying out a solid example of this highly underrated and criminally underrepresented style

Reviewed by dunkel_weizen from Oregon

3.31/5  rDev -3.2%
look: 3.5 | smell: 3.75 | taste: 3 | feel: 3 | overall: 3.5
6 month old bottle, head is white and splotchy with mild retention and about 1 finger thick at pour. Nice straightforward nose, with hints of flowers, minty hops, and some citrus and herbal tones. Pour was light, and consistent strong carbonation throughout with a crisp clear apricot color. The body is seems rather thin to me. Taste has an immediate bitter note that pleasantly rounds out with a nice nutty character, with notable malt and some light hop. The lighter notes noticed on the nose reappear after a notable delay, as a pleasant finish.

Although it has a notable medicinal vibe, it's a good refreshing ESB in a region where they are hard to come by. This seems like a nice spring or fall beer to me, although it could be enjoyed year round.

Reviewed by _ryan from Washington

Reviewed by OldSchoolMike from North Carolina

Rated by superwho24 from Arkansas

Reviewed by mintzmeet from Washington

Reviewed by OzmanBey from Massachusetts

Reviewed by pro45 from New York

3.75/5  rDev +9.6%
look: 4.25 | smell: 3.5 | taste: 3.75 | feel: 4 | overall: 3.75
12 oz bottle 3 months old. Pours an amber golden color with a soapy off white head. Smells of sweet malts, caramel, toffee, hops, citrus. Taste follows the nose with some sour nectarine and apricots. Hops are not so much here. The caramel malts take center stage, but a good balance with the flavors. Mouthfeel is sticky, yet good carb. For $7.99 a six pack you can't lose with this beer. Tastier than AAL's and many pale Ales. This was also not bitter. You can taste some faint bitterness on the finish, but not overpowering. Very tasty, easy drinker.
Jun 20, 2017

Mildly hazed copper amber color, it tops with thick frothy off-white head that stays with pretty good retention before gradually sinking to a bit lasting bubble sheet atop and leaving some lacing patch and spot on the glass-side.

Lots of sweet caramel in a nose together with baked bread, biscuit, and toffee, all from malt. Hop same time provides its crisp spice and mild fruitiness.

The taste is also led by caramel sweetness. Then it is joined in by baked bread, biscuit, and toffee like the aroma while hop lends its mild fruitiness, some spice, and subtle herbal bitterness at the end.

The body is between light to medium with semi-smooth mouthfeel and high carbonation through the palate. The feeling is okay and no offensive.

It is true to the style with malty loaded of caramel sweetness also baked bread, biscuit, and toffee.