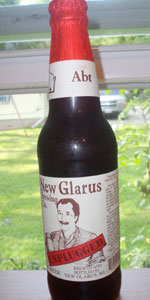 Tastes kind of like a waterfall. A little bit of everything dumped together, raisin, plum, red wine, sherry, chocolate and brown malts. Way too boozy for me, this was like breathing fire unlike any other New Glarus beer I've had. Big quad here.

Reviewed by Chaney from District of Columbia

Served in a Mekong snifter.

A: Funny, this poured clear as a bell, yet reddish brown and with really no head.

S: GLORIOUS! This was the smell I've been searching for in terms of American-made Quads: Figs, brown sugar, plums, raisons, and no alcoholic scent to speak of!

T: Excellent taste, yet not as complex as I'd hoped. All the top dark fruit players are there, and it had sort of a tea-like disposition overall.

M: VERY light in body and I'm not sure if that is what the brewer intended. Minimal carbonation, but the saving grace is that this wasn't sweet and had a killer balance to begin with.

O: I'm thinking this is probably a shell of its former self in terms of body and carbonation, but this drinks like a 70 - 80 shilling Scottish Ale!

Reviewed by Phocion from Minnesota

3.98/5  rDev +3.1%
look: 4 | smell: 4 | taste: 4 | feel: 3.75 | overall: 4
12 oz. bottle into Westvleteren chalice. Beer was brewed in 2010 and kept at cellar temp since my purchase from a refrigerated cooler, so it is approximately four years old at the time of review. Dark mahogany color with a dense and creamy tan head. Poor retention but it drops to a swirly crown with thick sheets of lacing.

Flavor is fairly toasted along with a nice touch of fruitiness. The grape flavor gives it a subtle vinous flavor, which combines nicely with the sweetness from the fermentables. Finish is alcoholic and fairly spicy.

Highly carbonated, medium-heavy body mouthfeel. A bit thick and sticky on the palate.

Overall, this is a good attempt at a Belgian DSA by an American brewery. It's a good beer and handles the age well, but it doesn't stand up to your St. Bernardus, Westvleteren, or Rochefort examples.

Served at fridge temp and allowed to warm over the course of consumption. Side-poured with standard vigor as no carbonation issues are anticipated.

Pours a one finger wide head of khaki colour. Nice creaminess and thickness. Appears soft, supple, and inviting. Head retention is good - about 6 minutes. Has some nice lacing, but little sticks to the sides of the glass. It's a good looking head for an abbey ale, but frankly it barely holds a candle to that of the best examples of the style. It isn't as delicate or fragile as say, Westvleteren 12.

Body colour is an opaque very dark red. Appears well-carbonated. There are no obvious flaws here. No yeast particles or hop sediment is visible.

Overall, it's a damn fine appearance for an abbey ale, but I've certainly seen better. Not unique or special, but certainly healthy and inviting.

I do pick up on a definitive Belgian character, which I think comes from the use of abbey/Trappist yeast, but I don't find any explicit yeast notes per se (e.g. biscuity notes, clove, banana, etc.)

In no way boozy. No overt hop character is detectable.

Overall, it's a very appealing aroma of moderate strength. Attenuation does seem a bit low for an abbey ale; it's a bit more sugary and rich than I'd have anticipated.

Mf/T: Disappointingly, it's a bit weak and airy in terms of texture - almost akin to a nitro Irish stout. Smooth, wet, creamy, even refreshing. Shockingly light on the palate. Great overall presence. I'd prefer a bit more body and thickness though. Perfectly carbonated

The flavour profile delivers varied notes of dark fruit - mainly plum and fig, though I can see why the label suggests sherry. Raisin comes through too, but the texture isn't as dry as is needed to complement that note. Belgian candi sugar makes an appearance alongside wisps of Belgian amber malts and abbey malts. It's a biteen bready, but as abovementioned it isn't really as filling as you'd expect an abbey ale to be. A kiss of apple comes through as it warms.

No hop character or yeasty notes come through, nor does any alcohol, and I'm not finding the dark chocolate mentioned on the label.

Far from complex or intricate for an abbey ale, but in classic New Glarus fashion it boasts impressive subtlety and incredible balance. While I'm a bit surprised by how shallow the flavours are, I do like the beer quite a bit. Flavour intensity and duration are average.

Dr: It's strangely drinkable for an abbey ale. The airy texture makes it easy to quaff, but I'd prefer more of a full body and weighty presence to really support the flavours. With that in mind, New Glarus has brewed an abbey ale that succeeds in terms of taste but fails in terms of texture. I'd buy this again if I could easily find it on the shelf, but unlike most New Glarus beers in this series, it's not worth trading for again. As much as I love the brewery, this beer just didn't quite nail the style they were after. Maybe age hasn't done this well?

Reviewed by ThePorterSorter from Oregon

4.01/5  rDev +3.9%
look: 3.75 | smell: 4 | taste: 4 | feel: 4.25 | overall: 4
The beer pours a dull dark walnut brown with a thin white head that fizzles quickly into nothing. The nose is a potent candi sugar and bready sweetness forward with notes of aluminum, cherries, and peppercorn. Similar fruity sweetness found in the nose hits the palate first followed by bread and finishes with a slightly bitter & yeasty bite. It's light-medium bodied, malty, yeasty, and has slightly bitter, biting alcohol finish. This is a very drinkable and enjoyable abt, with very little alcohol detected, big bready yeast, and pleasant aftertaste. However, I think this beer would be better with more ramped up fruit in the nose and taste.
Dec 23, 2013
Rated: 3.5 by TCgoalie from Michigan

Reviewed by beagle75 from Iowa

A: Clear, dark amber color with a peripheral ring of off-white bubbles. No lacing remains on the glass.

S: Cake, cooked apples, figs, and cloves make for a dark and traditionally Belgian-like smell. No alcohol is detected.

T: Begins sweet, with heavy Belgian pale malt and some cola. Dark raisin fruit emerges into the middle, while earthy roast and hops bring up the rear in the relative absence of the layered malt of the early profile. Cloves linger on the palate alongside some late carbonic acidity. No alcohol is detected.

M: Medium to thick viscosity, syrupy and heavy on the palate, with moderate carbonation.

D/O: This quadrupel is light on obvious Belgian yeast character, so much so that it could be mistaken as a doppelbock. The other ingredients register clearly their contributions to the sensory profile, with the malt and hops almost volunteering to be dissected apart and illustrate the structure that is present. This beer could be especially attractive to those that enjoy strong dark ales, but not a dominant Belgian yeast presence.

A: The beer is a deep dark brown color, with a short off-white head that fades slowly and leaves a thick on the glass.

T: The taste starts out sweet with flavors of dark fruit and caramel. Then a hearty roasted malt character and Belgian yeast come in. The hops presence is mild but complementary and brings a good balance. The after-taste is slightly sweet.

O: Tasty, goes down easily, not too filling, strong kick, good representation of style, it’s a good beer to drink for a while if you’re in the mood for the style.