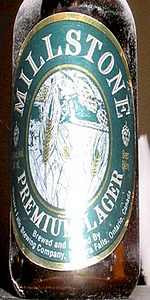 On tap at Mike's Place at Carleton University a few months back. Tap handle was 'Debt Rage Lager' but Moosehead says it's the same beer as the Millstone Premium Lager. From notes.

A - Poured a golden straw colour with medium carbonation. Bright. Film of white head gone to nothing fast.

S - Actually smells of hops. Not turned off immediately. Grainy with some grassy hop. Mild but balanced and refreshing. A slight fruitiness.

T - A little yeasty and mostly the same as the aroma. Not a bad lager.

O/D - Good. Could sesh and worth a shot. A decent lager branded well for the Graduate student bar.

This is a ver average beer. Its a lot like normal American lagers except it has a fuller bodied taste, much like Moosehead. I had this in a small bas in Sarnia Ontario just after the rib fest. It is a very light golden color and smells sweeter than any other pale lager i have had before. It tastes and feels much like Mosehead and is very drinkable.

341ml bottle from a 6-pack purchased at The Beer Store. Light golden body with a thin ring of white head. Smell and taste are honey, apple cider sweetness, grainy malts, baking dough, grassy hops, and cereal. Clean and crisp mouthfeel, sharp carbonated bite, malted dryness to end. An easy drinker, top flight for a generally boring style. Not as good as GR Galt Knife, but better than most pale lagers.

A clean and malty lager. We haven't hear much from this brewery in the longest while, and I hadn't tried this offering. It is a medium yellow with a tad of white head. The aroma is malty neutral. The taste is a bit malty grainy. There is a dryish aftertaste. It is fairly easy drinking and a serviceable lager.

4oz sample from Olde Stone Brewing Company. Arrived with a golden body, and a nice white head. Lots of yeast and grain in the aroma. Crisp taste, with a nice level of hops, and a fruity maltiness to compliment the grains. Light body and average carbonation for the style. Very refreshing, and a nice surprise.

Pours a deep straw color with a flash in the pan head that leaves only traces of lace. The aroma is grainy and on the sweet side. There's a little musty yeast character in the nose. The taste is malt forward with little hop aroma or flavor, just a few earthy notes here and there. Yeast esters are prominent and slightly tart. Bitterness levels are moderate and sweetness is high in the finish. The mouthfeel is cloying sweet and intermittently carbonated.

This beer is drinkable, but it could use more hop flavor to balance out the sweetness.

I didn't get much off of the aroma (very faint). Some hops on the nose. I did get a bit of fruit which I did not expect at all.

It looked like another wimpy lager. Straw like colour, little bit of head that didn't last long.

The flavour was good. It was kinda dry. I got flavours of apples and nectarines from it which took me by surprise. (though my friends don't agree about the apple, they say they tasted peaches).

Mouthfeel was average for a lager. It was crisp, dry, and light to med./light bodied.

Overall I think it was good. It would go well with some seafood or pizza. Mmmm lobster on pizza with Millstone lager.

With two weeks to go in the school term, my fridge was left dry and I was in desperate need of a cold lager to cool me down in this nigh-unbearable heat (combined with a tragic lack of air conditioning). Creemore has gone downhill since the Molson acquisition, so I decided to try something new - Millstone Premium Lager, one of the flagship beers of the Niagara Falls Brewing Company. It's a great lager that lives up to expectations - and with Creemore's downturn in quality, it is probably in a position to be considered the best widely available Ontario lager.

Pours from an industry standard bottle with a rather nice foil covered cap into my Creemore pint glass a light straw shade, with some hints of copper that demonstrate this is not a typical macro lager. It's topped by a very surprising two-and-a-half fingers of white head that recede after about ten minutes to a half-finger that stays fairly constant throughout the brew. It looks faintly soapy, but there is a fair bit of lacing. Definitely good looking, especially for a lager.

Smell is quite interesting, reminding me as much of a blonde ale as a traditional lager. On par or better than Creemore, but different. First scent is biscuity malt and some caramel, complimented by some citrus, grassy hops. Beyond that, fruit asserts itself tremendously - peaches, apricots, some fait pear and apple, this one is quite pleasant.

Taste lives up to the smell. Biscuity malts come through, along with the caramel, though the hop present is somewhat subdued. Surprisingly sweet initially, with many of the fruit notes in the nose translating to the taste - especially apricot and peach, but also (again) pear and apple. The initial sweetness is gradually countered by a fairly balanced mid-taste, and the finish is slightly bitter, with a medium dryness. A very crisp, very refreshing lager that goes down in seconds on a day as hot as today.

Mouthfeel is up there as well; the carbonation levels are just right, spritzy but not macro-ridiculous - very natural and not at all interfering with the rich flavour. Body is medium, which is nice. This is not your watered-down macro swill lager, this thing has a great feel. Drinkability, as you'd expect, is likewise up there - I'm just about to head to the fridge for a second; this is the most refreshing drink I've had all week. An excellent, sessionable lager, though the initial sweetness might turn a few people off.

With Creemore going downhill fast, Millstone Premium Lager may well become my local lager of choice. It lacks some of the things that I really loved about pre-Molson Creemore, but it's still a rich, lively brew that's worth a try, especially at such a reasonable price. Fours across the board for an excellent lager.

Had some faint hops aromas. Taste - malty sweetness to start, some traces of caramel. Then hop bitterness, and a flash of tartness. Mouthfeel was quite light but very creamy and smooth. Felt viscous in the mouth. Better than average lager.

A very good local lager on par or better than Creemore....except NFB millstone is uniquely different so comparisons are moot. Just got back from the falls and pulled one from the saddlebag cooler on the bike....poured a clear light gold with a 2 finger frothy white head that stayed as a 2cm cap the rest of the drink (good malts lots of protein in this froth). Aromas of sweet malt and apricot or pear..nice nose to it. Started clean then a nice whack of sweet malt hits you balanced off with the fruity undertones of the hops...the finish is nice...mellow with malt/fruit after tastes...deee-lishh-us. I like this lager and think its one of the best cottage brewed lagers in Ontario (for my tastes anyway)

Appearance: Deep golden brown tone with a rather thin white head leaves behind some lacing after settling out pretty quickly. Aroma: Real nice some toasted malts an all grain lager at it's best very solid bready tone but simple not too complex. Taste: A touch of hops peaks through but just barely this beer is a maltier lager with a nut characteristic created by the roasted malts used. Mouthfeel: Light to medium in bodey decent carbonation not much to say about it was smooth. Drinkability: Pretty damn good stuff, very drinkable and reasonably priced during my weekend stay in St. Catharines, ON.

I liked. It beat the pants off of any other selection we came across while in Niagara for a weekend not only in quality but in price.

Color was slightly darker compared to other pale lagers and shown through with impressive 'dunkel weizen like' hues. Head was short lived but it didnt really matter. I was there to drink and thats always the first thing to go. It is significant to say that a slight lace was left. Flavor is slightly sweet in the malt department. Thoughts of carmels and other semi sweet flavors come to mind. Hop profile is definetly secondary and serves meerly to balance out the sweeter malts. No bite here. Regardless of its fairly sweet taste this is one drinkable brew, even for a hop head like me who usually steers away from sweeter tasting brews. The sweetness isnt overpowering and this is also a significant bready flavor that keeps it from becoming one dimensional.

--Poured a darker color than expected. Left an even head that lasted not too bad.
--The smell shocked me as it was a lot sweeter than I had expected. To me it smelled like a lower fruit beer.
This beer was a nice little surprise. It has a pretty sweet taste but not overpowering, like some fruit beers. I had no expectations and I think that is why I was surprised. I will definetally drink more of this.
Thx

The colour of this lager is a dark golden, nice little glass ring and minor glass cling.
The body is medium/full and the carbonation is moderate.
Aroma at first is very yeasty which is soon replaced by a wortiness that lingers like an invisable cloud over the glass.
The taste starts out sweet and stays there. The mouthfeel actually increases the sweetness of this brew and seems to cause some lingering from a new direction. Odd sensation somehow.
Odd beer.

Millstone Premium Lager from Niagara Brewing Company
Beer rating: 80 out of 100 with 16 ratings