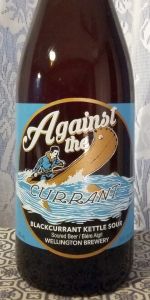 This one is no longer brewed. How excellent. There is no reason to brew this at all. Sour yes, but then completely flat and characterless. Very pretty though.
I hope breweries will get this whole fruity sour beer scene out of their system soon.

Bottle: Poured a light amber color ale with a medium size foamy head with limited retention. Aroma of light blackberries and tart notes is OK. Taste is a mix of light blackberries with some tart notes, lactic yogurt and no residual sugar notes. Body is about average with good carbonation. Enjoyable but well short on level of complexity.

Pours a pinkish amber with a spritzy, shortlived cap. Berry sweetness, yogurty acidity in the nose. The taste is light with blackcurrant, cherry and a straightforward malt breadyness. Very dry with a clean, white grape tartness. The mouthfeel is prickly with an active carbonation, light bodied. Lactic and blackcurrant tartness (dual tartness!) in the finish.

A straightforward sour. Moderate in acidity and light on the malt profile. A bit one dimensional, but a nice easy drinker. Worth a try, especially if you find it on tap.

Light reddish pink, ring of white head with little to no lace. Smell has a nice currant and berry to it, some peach and lemon as well, nice fruit throughout and even a bit of cherry, some funky acidity as well. Taste has blackcurrant upfront, lightly acidic and a bit puckering, very quick drying finish, little to no aftertaste with the exception of some lemony points. Very high carbonation, prickly, light-medium body, dryish feel. Not bad but not something very exciting either, a solid first effort at a fruited kettle sour.

Pours a hazy, translucent pink colour, with one finger of loose, soapy, whitish foam seated atop. It fizzles off over the next minute or two, producing little in the way of lace while leaving behind a thin collar. Blackcurrant fruitiness is an unsurprising inclusion in the aroma, with hints of blackberry, grape and strawberry-kiwi juice. Some acidity on the nose, with floral notes and a sweet, nectar-like component as well. Intriguing.

Decent fruit beer, but the sourness is very restrained. Grainy pale malts with light honey sweetness, underlying lots of berry-like fruitiness. More currant and blackberry; the tartness on the back end evokes raspberries and rhubarb, followed by mild lactic acidity at the finish. Subtle berry-skin in the aftertaste, which largely lacks lingering sourness. Light in body, with assertive carbonation that results in a frothy texture with a crisp bite. Light, fruity and refreshing, and pretty well-balanced as far as fruit beers go.

Final Grade: 3.75, eking out a B+. Wellington's Against the Currant pioneers a bold new direction for this brewery - an operation which is most strongly recognised for its "conservative" English-inspired fare. They've portaged beyond their comfort zone with this one, and the end result is a respectable effort that really hit the spot on a stinking hot August night. Definitely a beginner's sour (in the sense that it is very approachable and not very sour), but I'd say it's a competently made one - even though it's unlikely to excite (or impress) those who have been drinking sours for years now. An affordable introduction to this trendiest of beer styles; give it a try if you're curious.

Purchased a 750ml bottle from the LCBO in July. Not very experienced with soured beer and seemed like an interesting beer for the summer (it's 30 degrees here today).

Appearance is almost... clear? Like sprite with a few drops of red food colouring, very faint pink, and nicely carbonated (great for summer). Smell is kind of disappointing. Not getting too much in the way of anything, fruit or beer.

Taste is really interesting. It's more effervescent and lighter than a lambic, more tart as well, the alcohol is there too though to warm it up. Blackberry yes but I'm also really getting some other tart notes that make it really refreshing. Feel in the mouth is great for a summer. I would love this at the beach or late night campfire. I want to describe this as a bridge between a radler and a lambic.

Not as aggressive as other wild ales. Blackcurrant was mild but present. Not overly acetic and the kettle sour approach probably dulled this down. Not bad, but doesn't stand out for the style.

750 ml bottle served just above fridge temperature into a pint glass. Purchased from the LCBO for $7.95 CDN. A first appearance with wild ales, let's see how this goes.

Appearance - semi transparent, cloudy with a soft pink like a rose wine in color. A small half finger of white head rests on top but recedes quickly and carbonation is on the light side.

Smell - sour, stewed currants, definite sour note to it akin to rhubarb. There's a thin sweetness on top of that as if the fruit has been topped with sugar. Some earthy notes in there too, but rather inviting.

Taste - initially sour, with a little wildness. Currants and rhubarb are quite apparent with a Brief intermittent sweetness like sugar added on top. A milky pasteurized like characteristic in the flavor too.

Overall - Against the Currant makes for a nice first impression in the wild ales field, with some interesting flavours, a good level of sourness, but not too sour. Certainly a purchase worth making given the relatively low number of breweries in Ontario making this type of ale. The beer is rather cohesive and greater than the sum of its individual parts.

Against The Currant Blackcurrant Kettle Sour from Wellington County Brewery
Beer rating: 86 out of 100 with 17 ratings