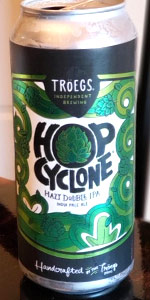 Notes: A soft, tropical and hazy Double IPA from Tröegs! Experience hop waves of epic proportions thanks to our Hop Cyclone technology, which churns in our fermenters and makes sure the notes of pineapple, soft citrus and juicy peach hit every last drop of this beer. London 3 yeast ups the tropical ante and helps uphold the haze from the grain. With heroic hop flavor and low bitterness, this once-a-year release will disappear without warning. Don’t miss it!

T: mango with hints of tangerine, pineapple, and lemon from start to finish; mild to moderate bitterness at the end;

Appearance: The body of the beer is opaque and light orange. It has a creamy textured medium-short sized head that is white, has good retention, and leaves some nice sheets of lacing on the glass.

Aroma: Pineapple skin and grapefruit come through on the nose right away, although they are very light smelling. There is also a sweet-smelling aroma of candy peach rings. A light bit of grass and cabbage comes through as well.

Taste: Up front there is pineapple skin and peach rings with a light bit of wheat flour that comes through as it creeps over the tongue to the middle. Wheat flour and apricot with a strong alcohol flavor is on the middle of the tongue. The aftertaste is pine, grain husk, and alcohol.

Mouthfeel: It is thick and chewy at all times, feeling overly thick most of the time. It has a nice rind bitterness which is pleasant. The overt alcohol presence drops drinkability a bit.

Overall: As a whole it feels very unrefined and non-perfected but it remains drinkable to a degree. It is somewhat better than some of the average attempts at a New England IPA but it seems to strive for appearance over aroma and flavor. It has an obvious alcohol presence and at "ALC./VOL. 9%" (as indicated by the can) it is a higher ABV beer where that alcohol presence would normally be acceptable, but there are so many breweries on the market with similar ABVs that can conceal it far better that it becomes only telling when a brewery doesn't accomplish it for this style. This beer also overdoes it on the body, but at least the aroma is nice and it does have some good flavors that pop in from time to time. This might be a good beer to pair with something spicy where the alcohol and some of the finer nuance might be lost. I probably wouldn't buy it again. It's not a beer I would recommend unless you're either looking for Tröegs' take on a New England IPA or want something better than the average or below average commercial take on a NEIPA.

Heckuva beer from a heckuva brewery. Best by 12/14/21 consumed on 9/11 so thanks to my local monger for quick delivery.
L: drinking from the can and. The can is stylish.
S: lots of tropical fruit. Very inviting.
T: delivers on the nose and finishes w some hoppy bitterness.
F: smooth with light carbonation.
O: works for me. Nice once per year treat. Well done troegs!!

O: A pretty standard/above average hazy NEDIPA. Nothing off the wall fabulous, but an easy drinking brew. The 9% ABV is dangerously hidden... definitely something to watch out for.

Ba-Bam!! Hoppy fruits hit you right in the face upon popping the top ... The rest of the experience does not disappoint.... Nice hazy golden color... Tastes yummy....ABV is very well hidden....be careful and enjoy

Troegs has been a great brewer we've seen around here for years. They produce many great brews. I thought it would be cool to try their take on a trendy, hazy style. It should be a winner, a style that rarely fails with a brewer who never does.

It pours pale yellow with loads of suds. The New England stench is there, but not too strong, meaning this must be pretty fresh. It tastes not as dry as some and not as bitter as some, with a nice balance. The finish is slightly creamy.

Recommended. Troegs doesn't fail either at the easy-to-get-right style, but it isn't the best or necessarily all that unique.

L: pours a bright straw/yellow with 2 fingers of frothy white head
S: peach, stone fruit, citrus, and grass
T: tropicals up front with a smooth grassy finish. The 9%is well hidden
F: medium body, low carbonation
O: clocks in at 9% but does not drink like it. A very solid brew

Look: Pours a deep golden color with a moderate haziness. The beer is barely translucent. A very thin white head with the looks of nice lacing.

Smell: Has a nice mixture of sweet and dank aromas. The initial impression is that it smells very sweet. Up front it redolent of ripe pineapple, golden raisins, coconut, orange rind, vanilla?, with pine, peppery notes, and green bell pepper lingering on the back end. The nose finishes very green. Smells interesting.

Taste: It's quite drinkable, and it definitely does not taste like a 9% ABV beer. Up front, it's sweet but that doesn't last very long. Then it transitions to pithy and piney with a moderately bitter and dry finish. The mouthfeel is soft and creamy, yet finishes crisp and dry which is nice. The bitterness is building as I get into it. I am also noticing a soapy aftertaste is developing; this could be my perception of the sabro hops which have this coconut / woody / soapy thing going on.

Feel: Carbonation is right on and the mouthfeel is soft and pillowy.

Overall: It's an very drinkable hazy double IPA. I wish I would have had this closer to when I purchased it, but I still think that it has not suffered so much while being kept in my fridge. My criticism would be that it doesn't strike me as being particularly special or compelling in terms of its flavors. However, it definitely is a very well-made and drinkable beer. If I can find this again as a single next year, then I will try to pick one up and drink it fresh.

Mouthfeel: Good thickness and carbonation. Chewy, and sticky on the teeth from the hop oils.

Overall / Drinkability: Dangerously drinkable. Went really well with Shakshuka and toast, and a very tasty DIPA/NEIPA (the can calls this a Hazy DIPA) overall. I could easily want another and I'd be in some serious trouble with this beer. Well done Hazy NEIPA!

Very good NE IPA. Double IPA .abv but very moderate bitterness and high drinkability. If you had a few of these, you would be very comfortable but surprised to be that "schnitzed". Pours a very hazy straw yellow with a big foamy head. Plenty of lacing on the glass and very good head retention. Aroma includes plenty of grapefruit and a little tropical fruit. Taste is more of the same, grapefruit and tropical fruit with mild bitterness. Mouthfeel is light and smooth with mild bitterness. Seems like a real NE IPA that is much lighter in .abv than it really is. Tasty and very drinkable, this is a very good beer.

I'm a little surprised this got such high reviews. It's fine... and it hides it's 9% well, but other than that, it seems pretty average. If you're looking for a good way to get as much ABV as possible, this is good choice. Easy to drink. But if you are looking to savor slowly, this probably ins't your best bet.