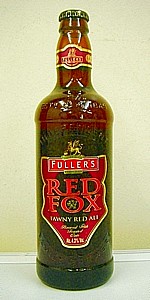 Poured a lovely reddish brown with a good, deep crown of off-white foam on top.

The aroma is toffee coated biscuits with nuts sprinkled on top.

The taste is also toffee-ish in flavour, with a wild berries coating adding some bitterness to the brew.

Good feel to this beer, an ideal Autumnal brew.

O: A beer for when the weather is changing, not dissimilar to other offerings from Fullers but quaffable.

Another one in the Fullers lineup that I hadn't tried before. I had a pint of this on a recent trip to England. Overall a pretty good beer, not my favorite.

Appearance is an amber red, a little clearer than most cask pulls but not much more carbonated.

Aroma is clean and malty. Not too much nose.

Flavor is good and what you'd expect from an Irish Red. Malty, a little sharp on the tongue. Not much in the way of hops.

Overall a pretty refreshing beer. Not much else to say about it.

grub from Canada (ON)

drinkability is nice. light and refreshing. nice balance. an easy session ale, just not all that interesting. a bit underwhelming.

Cask at The King Edward in Ilderton, ON. The server claimed this is an "autumn" seasonal ale available from October to December.

Amber brown body with a full inch of cream white head and big gobs of webbed lacing. A good looking beer. Didn't pick up much from the smell, other than lager yeast (odd) and slightly earthy hops. Taste is toasted oats, cereal grains, and orange pekoe tea, backed by biscuity caramel malt. Faint flavours of honey, toffee, and cinnamon, with a bit of zest from the hops. Some yeasty esters as well. Finish is dry grainy husk with a muted bitterness that ranges from tart to astringent. Light-bodied, almost watery mouthfeel. A strange little beer that seems more like a lager than an ale. Not really impressive, but I find it intriguing. I would probably try this again.

On tap at Ordes of England in Greenwood, SC. Brownish/ruby read with a thin white head. Very little lacing. Aroma is of roasted caramel and biscuity malts with some spicy hop notes. Taste is of toasted caramel malt with just a hint of spicy hop bitterness. Mouthfeel was a little on the thin side. A decent change of pace from the other offerings available.

500ml bottle bought from Sainsbury's as part of an autumn brewery 4 pack...

Overall - A very average brew from the usually excellent Fullers... just a bit on the boring side... still worth a try though...

Pours with a deep amber body, reddy highlights and lots of bubbles rising up through the glass. Tight fluffy offwhite head, great retention and about half an inch thick or so. Big lumps of lacing

Smell, sweet biscuity malt, some caramel sweetness on the nose too, a few little esters in there.

Taste, very thin mouthfeel, very short on the palette. Chewy malt and a touch of toffee sweetness, very little hop character but a little on the finish. A lingering biscuity malty flavour on the palette but ultimatly most of the flavour is gone very quickly

A pretty average ale from the Griffin Brewery, one of the most disappointing that I've had from them to date. I'm sure this would be much better fresh on cask

A: bright amber hue, fast-dissipating off-white beer head, on top of constant streams of tiny fizziness.
S: gristy malts, melted barley candy, rich dark honey, faint raisins, and corn-ish grainness dominate the nose, added with an herbal touch of hops and a faint citric-fruity line in parallel. Overall the aroma is overwhelmed by the sweet caramely maltiness, resulting in a somewhat simplistic theme.
T: exactly in reflection of the aroma, with biscuity and brown-sugary (nearly caramel-like) malts dominating the palate, quickly leading towards a licorice like bitter-sweet aftertaste added with a slightly chewy mouthfeel of toasted grains and nuttiness (maybe the "toasted oats" mentioned on the beer label?); a flow of soothingly dryish tea-leafy and mildly tangy-bitter hoppyness lingers along with more malt aroma in the end.
M&D: light-bodied with a softly spritzy mouthfeel, making the beer somewhat thinner and more fizzy than enjoyable. Fortunately the lingering hop bitterness and the lingering oat flavour make up for the lack of body. Overall this bottle is not bad, but I believe the cask version must be much more enticing (seemingly so, according the previous two reviews)~~

rabbon from Canada (ON)

On Cask at Conservative Club in Maidenhead (near Windsor & London, England). A seasonal ale, it is fantastic when served correctly. I didn't feel it an Irish red at all, but was slightly ruby red in colour. Loved its autumn biscuity and caramel flavour and fading aftertaste. It can be found in bottles in south England anyways, but wasn't the same. Great seasonal ale.

[email protected] Prince of Wales, Richmond, London. Nutty and smooth, caramelly, lightly grainy, dry and bitter, smooth mouthfeel, typical of Fullers. felt like more of an Irish red than anything else, due to the nutty flavours, and slightly red/brown appearance, whatever it was, it was decent.