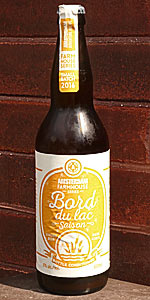 Pale golden blonde colour, ring of white head and little in the way of lace. Smell is fruity and lightly grainy, wheat, green apple and lemon with some yeasty points as well. Taste is fruity and spicy, grainy and fruity, pretty by the numbers spicy saison with no funky points really, finishes almost bone dry. High carbonation, medium dry body. A decent saison, clean and refreshing but not all too interesting.

bevvy1 from Canada (ON)

Appearance is kind of generic... fairly clear golden yellow, small head that dissipates but not completely.

Smells like.... Heineken? There's a green note there but nothing spectacular. I'm smelling for spices, funk, grains.... not getting much, even as it warms up a bit. Waited a good 15-20 minutes too.

Clean and refreshing taste. It's "good" according to me and a few buddies tasting it right now. It tastes like... beer? A bit of funky but tastes like any pilsner/lager you can buy for much cheaper.

Mouthfeel is refreshing and effervescent but nothing out of the ordinary.

Ultimately I feel like I've paid a premium price for a decidedly average beer. It has less of an awful aftertaste than some of the mainstream brands (Heineken, Carlsberg are some names that come to mind here as far as taste/smell) but I'm left wanting more flavour and really honestly i wish I could SMELL it more than anything. I love the brewery but this is a miss for me.

650 ml bottle served fairly cold into a pint glass. Purchased from the LCBO for about $7 CDN.

Appearance - clear pale golden color with an impressive two fingers of fluffy white head. Plenty of carbonation with a touch of haze. Good retention leaving a rocky white base and some lacing around the edges of the glass.

Smell - a little bit earthy and leafy on the nose with some lemon zest and pepper. Maybe a hint of cloves as well. Classic aroma with a twist.

Taste - rather like the nose. Subdued bitterness, some bready and doughy flavours, a pinch of lemon and some pepper giving it additional taste and feel.

Mouthfeel - carbonation is mild, but the peppery aspect gives off the impression of a more robust body. Drier than average but not greatly so.

Overall - Bord Du Lac is a fine and well crafted saison, nothing seems forced, the lemon and pepper combo work nicely, and the body is pretty light making this an easier to drink, higher ABV beer. Certainly worth a try before the limited stock is gone.

Pours a translucent straw-yellow colour, with one inch of pillowy, sparkling white foam seated atop. It wilts gradually over the next couple of minutes, caking the inside surface of the glass with a fine layer of lace as it continuously seeps off; a wide collar of foam remains in place afterwards. Grainy/crackery pale malts, wet hay and floral hops on the nose, with suggestions of lemon zest, red apple flesh and some weakly peppery spiciness. Smells clean and fruity; nothing too fancy, but it's enticing enough.

The flavour is very straightforward (and a bit lacking in complexity, at least IMO), but it's quite clean and approachable nonetheless. Grainy, crackery pale malt sweetness serves as a backdrop, but is probably the least-noticeable aspect of the profile. Light notes of lemon and red apple come through by mid-sip, with faint hints of green/underripe banana. Grassy hay and floral hops begin to shine through in the latter half, with the yeast left to mop up at the finish - peppery and spicy, priming the palate for the largely-dry aftertaste which follows. Light in body, with aggressive carbonation levels that prickle the palate constantly, resulting in a very crisp mouthfeel with a sharp bite to it. A properly constructed farmhouse ale that is easy to drink, but not exciting in the least.

Final Grade: 3.8, a B+. Amsterdam's Bord du Lac Saison is fine, but I don't think it'll be a regular purchase for me. Honestly, I think I preferred the first entry in their Farmhouse Series (the Home Grown Saison), but this particular farmhouse ale also has its merits and is probably a bit closer to what a saison originally was (vs. what American brewers have forcefully evolved it into). There's no funk here at all, really, which is likely to irk a few beer geeks - but overall I still find this to be an enjoyable (if not particularly memorable) Belgian-style ale. At $8/bomber, this is likely a one-and-done for me, but it's still worth a try.

Bord Du Lac from Amsterdam Brewing Company
Beer rating: 85 out of 100 with 19 ratings