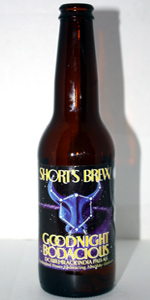 Look - Pours a super dense and thick cocoa colored head that leaves tons of lacing. Opaque and pitch black appearance.
Smell - The scent is mostly roasted malt, cream, and chocolate with some subtle pine hanging in the background.
Taste - The initial taste is roasted malt and coffee, followed by some piney bitterness. The bitterness isn't overwhelming, and the high ABV is hard to detect.
Feel - Pretty thick and crisp mouthfeel. Finishes quite dry.
Overall - The malt and hop flavors are balanced really well and the ABV is well hidden, making this easy to down.

The appearance at first glance is black, however this is much more of a deep mahogany with amber and caramel flecks at the edge of the glass and a translucent body. The mocha colored head resembles a stout. The aroma suggests barleywine as caramel malts abound, along with toffee, and a sweet smell like candies fruit. Some earthy tones and the faintest bit of pine also show up in the nose. The taste is both bitter and sweet simultaneously, sweet up front like toffee and caramel, then some bittering hops show up, but the sweet flavor doesn’t leave. Some earthy tones weave in and out and some chocolate shows up on the finish. Mouthfeel is mildly prickly with good carbonation and also creamy. Fuller than medium but nowhere close to chewy. Overall I’m really digging this one, even if I don’t really agree with the classification, but really who cares.

12oz bottled 10/23/18 (5 weeks ago) poured into a Spiegelau IPA glass at fridge temp, no ABV listed on bottle. The beer pours dense black with persistant mocha brown head. The head recedes to a half inch cap and covers the glass with lace. The aroma is earthy with hops and roasty from the malt. The taste hits quick with a one-two semisweet caramel and roasted malt punch. Mid palate the taste turns to medium bitterness and earthy hops. The mouthfeel is medium bodied, adequately carbonated and mostly dry in the finish. Overall, good. Not the most balanced example as the caramel is most dominant and the bitterness and hop presence are low for a 9% Black DIPA.

Fresh this beer is harsh with no piney hoppy flavor. Give it a year and turns into piney hoppy goodness with coffee attributes. is it a black DIPA or black barleywine? One thing for sure it's delicious when aged.

A - Dark opaque body, essentially black, with brown highlights, and light tan head, thin, but with clear and extensive lacing.

S - A mingling of roasted malts, hints of coffee and chocolate, and a bit of herbal hops.

T - Mostly dark bread and molasses, coffee, and a bit of citrus hops, and a mildly bitter acidic close.

M - Brisk feel, moderate body, and a melange of dry, warmth, and a thread of sweetness.

O - A beautiful example of the style, with enough hops to elicit IPA, roasted malts to give great bread and chocolate. Delicious.

Pours into a standard pint a deep dark cola color with a full one finger mocha colored head that sticks like glue to the glass as it settles slowly into a frothy mass.Dark chocolate and fruity esters in the nose,slight pine resin is detected as well.Roasty and earthy with a sharp resinous palate,mild caramel sweetness but the roast and resiny hops win the day,the alcohol is really well hidden.A dry drinkable ABA here,was expecting much sweeter,a nice surprise.

Above average for a style I don't always love; I'd say this is a fine brew.

Bottle dated 2/23/2017. Poured into IPA glass. It pours black as night, with one finger of mocha-colored head and lacing. It smells of roasted malt, burnt coffee, and whiffs of chocolate and pine needles. The taste is nicely roasty with dark malt, burnt coffee grounds, bakers chocolate. As the glass warmed, I tasted more of the coffee. It has a burnt, bitter, piny hop finish and a decidedly bitter after taste. The various tastes blend very nicely. This is medium-bodied, with an almost creamy mouth feel, light carbonation, a the 9% ABV gives it nice substance. Overall, it is a very fine Black Ale. It's right up there with Wookey Jack, Dark Penance, Night Time, and Dubhe, and it's close to my absolute favorite Black Ale, Carton's Epitome. I'm very glad to have tried this one and thank @superspak for the opportunity.

Pours black with a thick, medium, Brown head and last a while with good lacing.

Tastes rich roasted malts and coffee followed immediately with bitter piney hops. Finish is dry with a piney linger and hints of dark chocolate. Lighter side of full body and smooth lower medium carbonation. This is a very rich black ipa

It's amazing what age can do to an ageable beer, even for a DIPA such as Goodnight Bodacious.

Poured into a snifter:

O: drink fresh then she the rest. 6 months May just be it's peak but I will definitely age a couple more. It's more of a barley wine than a DIPA and in 6 months time the flavors really shine.

Poured into a goblet:

L: jet black like cold coffee or a delicious stout. However something about it is missing when compared to other black IPA's.
A: malt and barley...not quite as expected as I was hoping for hoppy piney cofee citrus aroma

O: good but rating is low for I expected hoppiness being it's labeled as a DIPA. It also is described as having a barely wine taste when it tastes more like a scotch ale. It's almost like the brewers @ Shorts had no idea what they brewed so it is sort've a DIPA barley wine without strong noticeable hop presence. However being it is resembled as a barley wine maybe some age will do it good. It's almost like a DIPA gone wrong creating a resemblance of a barley wine. As with all barley wines perhaps with some age I'll like it better.

Right now, and in the store tasting, the Goodnight Bodacious is of the highest of tiers - that good. We'll see what happens when I drink a TON of it this evening. A ton of some of the best. I am honored.

It pours out the growler with a thick, luxurious head that dies after a while but never ceases to have nice character. Good little fizz. The aroma is nice - pungent and fresh, not yeasty, not too strong.

The taste is overwhelmingly good. It blends sharp, piney hops bittering with strong malts and a roasty finish. This just tastes exquisite.

I will now hurriedly end this review so I can get on with drinking a whole mess of it.

Pours a thick black color with a khaki to tan colored head. Looks real intense for a black ipa. It's flavor is more dark malt dominated than hop dominated in my opinion, and that's fine with me for this one. In my opinion, this drinks more like a stout than anything else. It's big, thick, and mean for a beer of this style.