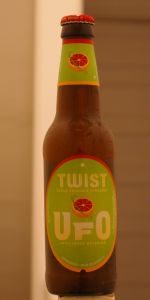 Notes: This hefeweizen is hazy and golden in color and gives you the perfect Twist for your beer repertoire; blood orange brings the citrusy zest, and bergamot brings the zip.
View: More Beers | Place Reviews
Recent ratings and reviews. | Log in to view more ratings + sorting options.
Rated: 3.9 by Sdotbrown from Pennsylvania

T: balanced between blood orange and bergamot for a moment, then bergamot is predominant through the finish; the fruit flavors are natural - not artificial; by the end, the blood orange is gone altogether; no bitterness;

Rated by bisonfort from Georgia

Reviewed by BEERMILER12 from Maine

S: Lots of vague yeast influence along with some of the blood orange and bergamot

T: Follows the nose. Starts off with the yeasty notes and goes into the blood orange and bergamot. Finishes with lingering yeasty notes

O: Much like their other UF Offerings, this one has a really strong yeast presence and character throughout. Very easy to drink but not too much going on aside from the yeast influence

3.63/5  rDev +0.3%
look: 3.75 | smell: 3.75 | taste: 3.5 | feel: 3.5 | overall: 3.75
A: Pours a lightly cloudy pale to medium golden yellow in color with moderate amounts of active visible carbonation rising quickly along the edges of the glass and moderate lemon yellow highlights. The beer has a two finger tall fizzy foamy white head that reduces to a large patch of thin film covering the entire surface of the beer and a thin ring at the edges of the glass. Just shy of moderate amounts of lacing are observed.

S: Light aromas of banana + clove (from the yeast) over the top of light to moderate aromas of wheat malts with just a hint of citrus/orange.

O: I was hoping for a little more intensity in the presence of the citrus - easy to drink and enjoyable with well hidden alcohol.

3.62/5  rDev 0%
look: 3.25 | smell: 3.75 | taste: 3.5 | feel: 3.75 | overall: 3.75
Decent Witbier nothing crazy color was pretty different a very hazy yellow with blood orange I guess I expected something you know pinkish... Regardless smell was nice blood orange grains and wheat all that I expected... to fall short of the taste. To me though this was one of the better Witbier beers I had great wheat grain and some tart edge which I assume from the blood orange but its not enough to make me think its real. Body is excellent crisp clean and easy to pound.

Overall a decent beer with balance taste but don't expect a tart fruit filled experience but expect a damn good take on the style.

3.7/5  rDev +2.2%
look: 3.5 | smell: 4 | taste: 3.75 | feel: 3.25 | overall: 3.5
This, from my July 2008 visit to The Bulldog - Mid City in Nawlins: "Best of all, the upscale clientele were offset by some really rough types that made me wonder what would happen if I ever raised my voice in vulgarisms at IHLNC. Slit and Twist were just a couple of the niceties that I heard uttered. Hey, it was Nawlins, right?" Oh, man, it was one of the server's birthdays and this one guy, undoubtedly off of an oil platform, was doing the caveman bit & she was buying it! The Chauffeur & I were in hysterics since we are both thought of as rather "rough-hewn". I now anxiously await UFO Slit; UFO P**sy; UFO C**t; UFO Quim & a host of other vulgarities that the brewers had not previously considered. I could enumerate many more, but as a retired U.S. Navy sailor, I do not have that kind of time! Rest assured, I know plenty of other terms & will be happy to fill you in some other time. Onward!

From the bottle: "Awaken your senses with a citrusy lil' Twist. Blood Orange brings the zest, Bergamot brings the zip. With this new Spring fling, flavorful days await!"

You can probably imagine my shock, outrage & disappointment at having to use a bottle opener to Pop! the top! Why, in heaven's name, does this NOT come it a Twist-off bottle?!? Grrr. I usually hate twist-off openings, but in this case, it would have been fitting. My anger manifested itself in a VERY heavy-handed pour. I think that it may have taken offense to my use of the term, "Twist" as it came roaring up to challenge me before I backed off & allowed it to settle. I was faced with three-fingers of dense, rocky, bone-white head which showed excellent retention. Color was a not-surprisingly cloudy Golden-Amber (SRM = > 5, < 7). Nose was REALLY citrusy, but with an unexpected sweetness. I could not have identified Blood Orange on the nose and Wikipedia has it that Bergamot "... juce tastes less sour than lemon, but more bitter than grapefruit." Ooh. That is intriguing! Mouthfeel was thin-to-medium, not watery, but not much beyond it. either. The taste was not as sweet as the nose had led me to expect, but the citrusiness was evident in the mouth & on the tongue. I think that given the description, the blood orange was really holding the bergamot in check. It was not entirely sour, although I felt some light puckering in my lips, nor was it overly bitter. Instead the blood orange acted as a counterpoint to the bergamot's point. Finish was semi-dry and highly refreshing. It seems to me that Harpoon released it incorrectly, for Spring, rather than for the hot, humid days of summer.

Reviewed by TonyLema1 from South Carolina

Fruity with a bit of orange sweetness to the nose.

Sweet and tart in equal measures. The finish leans tart. The body is rich and the carbonation slightly muted. Surprisingly pleasant without any extremism nor flaws.