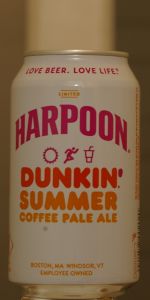 Aroma is strong coffee. Not much else.

Taste is coffee grounds. Hard to detect much else. Mild bitterness, mostly from coffee. A bit astringent.

Dunkin' coffee beer, ridiculous? Yes! But this is a decent coffee pale ale.

As my Summer break begins to wind down, I am CANtinuing to clear out as much of the backlog (now primarily CANs) as possible before returning to work next week. The CANQuest (tm) has really gotten them in this Summer & especially Goses, Berliner Weisses, IPAs & Lagers, primarily Pilsners, in an attempt to be the heat. This is one more insCANce.

I was starting to get a tad irritated with their interpretations of an APA so I went with an aggro C-Line Glug after the Crack! that netted me just over two fingers of dense, foamy, rocky, tawny head with excellent retention in the face of today's heat & humidity. Color was a solid-Amber (SRM = > 7, < 9) with NE-quality clarity. Now, we were talking! Nose was less coffee-like than I might have expected, but CANversely, it smelled much closer to an APA than the previous two. Still, when held up to the standard-bearer of SNPA, it really did not measure up. It was marginally within spec for the style, but it was not my cuppa coffee. Mouthfeel was medium. The taste left no doubt that coffee played a part in this beer, but it also allowed for a hoppy bitterness to be perceivable. It was two different kinds of bitterness that actually worked pretty well together. That said, I had to shake my head in disbelief that I was saying it, but I would have preferred that they had gone with a full-on NEIPA instead. It would have really been disappointing if I had truly been expecting an APA. Finish was semi-dry, but it just was not really an APA. YMMV.

Around a medium body with a decent amount of lasting carbonation. Overall a nice crisp feel
Aroma is lightly roasted coffee, lightl6roasted malt, earthy hops
Taste was basically the same as aroma. Coffee was there but hops really dominated the taste

Canned 4/1/19. Pours a cloudy gold hue with lacing around the glass. Light roasted coffee essence in nose with a touch of hops. It's surprisingly quenchable and the pale ale base seems to jive well with the coffee. Well worth a try if you're looking for something different to quench your thirst in the summertime.

Overall: a decent coffee-centric ale that is easy to drink.

Pours clear amber with a thin white head that lasts. Aroma is fruity and some coffee. Taste ashy coffee with some hop bitterness. Feel is quite good, nice body to this one. Overall a decent pale ale.

Poured into a Teku glass,looks deep golden and is semi opaque. Quickly diminishing fizzy head. Smell is of mild coffee,earthy,biscuit,mild vanilla. Taste is mildly sweet,D.D. coffee and caramel malts come through. Feels well carbonated,finishes semi dry with a lingering D.D. coffee taste. Overall reminds me of Barrel and bean from Allagash, not as good though, still well done.

Hazy amber with a white head. Good retention and lacing.

A decent coffee pale ale. Not my favorite, though.

The smell reminds me of ashes from a spent fire. Think real charcoal.

Very burnt wood flavor -- I know I should pick up coffee here but it reminds me more of leaving the coffee pot on the stove with any semblance of liquid long gone and one will need to scrub the pot forever. The swallow brings forth an ashtray taste that does linger a little too long.

O: Pretty much what it advertises... a coffee APA. Not a favorite style but decent enough flavor .