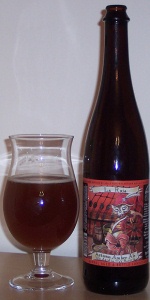 From untappd... I had this beer at the brewery
The beer is pretty sour and tart but with lots of fruity sweet cherry. Had a medium dry body with a lighter carb.

Bottle to tulip. Date on the back stamped "08/16/2018."
The appearance was a rugged muddy amber color with a slight transparency about it. Thin white film of a head stays on top throughout my sips. Just some spotty legs of lace here and there.
The aroma had some balsamic vinegar sour character running through some Belgian malts and tart dark and red fruits, soft lemon pulp confiscates the backbone. Keen earthy hop structure. Tart fruit skin.
The flavor leads with the sour vinegar tones while pulling in some Belgian malty crackery tones with some clean caramel hints. Clean Belgian malty and vinegary sour aftertaste.
The mouthfeel was about medium bodied with a kind sipping quality about it. Carbonation seemed like it was starting to fall off but didn't seem to effect much of any of the aspects of this beer. Awesome finish of caramel dry malts with balsamic vinegar and red fruit skin tartness.
Overall, Flanders Red Ale, yup, I'd absolutely say so and definitely want again.

Kind of a muddy peach color, smallish head. Flavor was moderately tart, strongest thing that came across to me was fruit skin bitterness. Was pretty good, but didn't stand out much to me.

Red colored beer with a great taste of beer funk. Good sour, but not too sour. Some solid dankness making this similar to a beligan style brew with some extra elements.

Appearance - Served in a 12oz snifter, slight haze and reddish copper in color with a thin, broken layer of suds sitting atop with a thin ring encircling the edge of the glass. No lace.

Smell - The aroma is mildly tart and sweet with cherry, berry and a hint of funk.

Overall - A really easy, relatively balanced flanders red that doesn't get overrun by tartness. One I would drink time and time again.

Poured from 750ml bottle into glass. Label is stamped bottled on date of '06/09/2017',
Medium amber colored body, with just a hint of red. Totally murky body. Any head quickly dissipates to thin ring. No lacing.
Aroma of berry fruit, mated with cherry. Funk and oak also.
Tart, sour taste of berry. Just a touch of sweetness but strongly countered with the sour. Lots of oak tannins. Caramel and spice are complimentary, but this is touched with the sour. Leather and funk are there too.
Medium mouth feel, which is greatly influenced by the sour nature of the beer.
From the appearance, aroma, and taste, this is a sour beer through and through. A good example of a sour beer, with funk, without fruit added. An excellent and well done barrel aged beer, then bottle fermented.

If you're considering a sour beer this is an awesome sour. I have a drank several dozens of sours and this is one of my favorites. Everyone has a different pallet, but this one has a good balance and is not overpowering in any direction.

on draft, in a tulip glass

Very nice beer. VeryComplex taste. Based on a Flanders red but much less sweet and more complex than most examples. Tastes like a combination of yeast consistent A wild ale. Finishes w small sour. Getting a small vegetal aroma- but it's cold here, may be stronger when it warms up. Very interesting and enjoyable. Would order again.

batch 17 from 9/16/11. Delicious, way better than fresh. The flavors really explode on the tongue with this one. I'd never had one aged before, and this was excellent.

La Roja is a good example of admiring an ale even if you don't like the style.
Of the beers I've rated on BA, only .45% are Flanders Reds. Hardly a go-to for me.
Yet, I do force my mind open enough to enjoy the better ones... and they do pair well with some foods, like salads and cheeses. (This La Roja went well with pasta and a red sauce, so my tolerance must be improving as I age.)

And while the Flanders Red delicacy is still not for me, its fans have a point. Blending different vintages is an art. Making the tart less so is not easy. But, it is done well in La Roja. While it finishes a bit too acidic for me to drink a lot of, foods save my stomach from the acidity. So my lesson is: if drinking a Flanders Red, eat.

Listed in the "1001" and reviewed by the venerable Randy Mosher, La Roja certainly deserves to be on the list as does Jolly Pumpkin. RM makes the point that in 2004, JP's business strategy was a big risk because of the difficulty in delivering a consistent product to this market niche. Fifteen years later, this blended product is consistent and it helped grow its market considerably. Mission accomplished.

This was my first venture into sours, and its still one of my favorites. A spicy version of a Flanders Red, its something I make a point to seek out every time I'm back in Michigan.

Looks like a red ale. Very thin, off white head just under 1/6". Hits all the flanders notes, medley of wood, malt and tartness.

Taste was solid, the tartness took hold, plenty of cherrywood notes. The base beer has ample toffee to be there but not obtrusive. Drying wood notes and tannins in the mouthfeel.

A good, but expensive beer. Better options are Cuvee des Jacobins or Oude Tart, but this is what I would call leader of the pack 2nd tier flanders.

This one was good but drank a little boozier than I expected. It came off almost like a barrel aged sour. That isn't a bad thing, but I felt like something was a bit off. The flavor was nice but there was a weird combination that didn't work on every level.

Aroma of huge oak with touches of earth, tart cherry, vanilla, and vinegar.

Taste leads with mouth-coating cherry tartness, which is more sour than the aroma led me to believe. As it warms, this tartness is subdued. The earthiness, oak, vanilla, and vinegar are all there in supporting roles. The lingering aftertaste is that of red wine.

Mouthfeel is solidly medium with prickly-at-times carbonation. Sourness is on the lower end of medium.

Overall, La Roja was a nice introductory sour. While I admittedly am a novice to sours, I feel like this showed off what a no-frills, barrel-aged sour is all about.

This beer was from Blend 8, bottled in June, 2011, just a tad over 4 years ago and has been sitting quietly in the basement waiting for this particular evening.

The beer pours out into a Duvel glass a clear reddish brown color with reasonable carbonation. The 1/4" head is a light ivory color with lots of varied shaped bubbles that soon settles to a ring, an irregular island of foam with an extra bit of thickness in one area. Eventually all that remains is a small island over the nucleation point. There are several small speckles of foam on the glass. Sipping creates several small patches and speckles of lacing even towards the end of the beer..

The aromas include tart cherry, a touch of vinegar and some clear musty, funky character from the yeast. There is also a touch of oak in the background. There is enough of that musty smell that it is sometimes noticeable in the room even two feet away from the glass.

The flavors are pretty much what is expected from the nose and include some tart cherry, a touch of vinegar, a bit of funkiness and some astringent character. However, the oak seems to have disappeared behind the tart/sour flavors.

The mouth feel is light bodied with a slight crispness from the faint prickly carbonation. The finish is relatively long and begins in the tart cherry vinegar flavor that rapidly fades leaving at first some tartness and finally a faint astringent quality that lingers in the back of the throat for quite a while.

Overall this is a well made beer, which is what I've come to expect from Jolly Pumpkin. The beer seems to be a reasonable expression of the style. While it is a bit pricy for regular drinking I could see having it as a special treat or a companion to certain kinds of food with dinner, e.g., salads involving green apples and blue cheese. Based on my experiences with other Jolly Pumpkin beers I also don't think this beer has improved with age. So I think this particular bottle may be a bit past its peak and on a slow slide downhill.

aroma: a medium vinegar and medium grape aroma.
appearance: reddish copper in color. no head. appears flat.
taste: slightly tart on the back of the tongue. . has a grape / wine like taste. A little on the sweet side
mouthfeel: no carbonation to speak of... almost flat. Has a medium mouthfeel but slightly watery at the same time. The lack of carbonation makes the sweetness linger on the touge.
Overall: would be better if the carbonation was higher to balance out the sweetness. Nice tartness.

pours a copper red with a thin layer of head
smell of sour cherries, a hint of oak and a hint of cider vinegar and sugar
i don't know what i like so much about the taste, sour cherries and vinegar, some grassyness and malty caramel at the end but the sour cherry stays, it's not a pucker up sour but a nice decidedly sour balance.i am a fan of sours and this one makes me very happy.
feels like just the right amount of small bubbles to enhance the flavors happening, very alive but not too carbonated, medium to large body
i really like this as an interesting hard to nail down very rewarding brew, wish i had the chops for giving it a proper review, also love that it's now available in 12.68 (why 12.68) oz bottles so not to much commitment and less of a hit on the wallet.

This beer blurs the line between styles and falls short of what could be a better beer. Not as sour as other Jolly Pumpkin offerings. Not one that I would buy again.

Beautiful red color. Total sour smell. Wasn't expecting this because the bottle says artisan amber ale. Semi cloudy with small floating debris. Hardly any head when poured. Damn that's a sour for sure. Not bad but it's for sure sour.

Appearance - Pours a copper red with a finger of bubbly tan head.

Taste - Starts off with the tart cherries then goes into the apple cider vinegar and the caramel sweetness. The oak cask aromas, spices, and touch of earthy hops help round out the brew.

Mouthfeel - Medium bodied with moderate carbonation. Finishes sweet from the cherries and then sour.

Overall - A unique and well made beer from Jolly Pumpkin. I like the fact that the sourness doesn't overpower the beer itself and the sweetness is just at the perfect level. A well executed beer. One to try if you haven't yet.

La Roja from Jolly Pumpkin Artisan Ales
Beer rating: 91 out of 100 with 2023 ratings