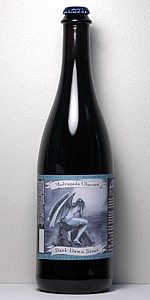 So far, sour stouts haven't been a bad experience. This time it starts with a pint can being emptied into a clear glass Imperial pint mug. The head is a modest light brown, so the contents of the can fit perfectly. This is still an uncommon style, so it's novel to have something that looks so obviously stoutlike smell like a sour. Maybe there's a little roasted malt in the aroma somewhere, but this smells like a good Flanders Red. The brew itself is the typical black coffee brown that befits the stout profile. Even at the onset, where the biggest hit of sweetness usually appears in most beers, this is a solid sour. Only during the finish does the roasted malt make its statement. A bold taste of both sourness and then some well-roasted malt makes this a very enjoyable and somewhat unique taste trek. There's very little sweetness to be had, as the sour hits first, then the roasted malt adds its bitterness. This has almost no hint of the esters that make Belgians so readily identifiable. It also brings no glass lacing, nor taste of the 8.1% ABV. The body is smooth, as in a good stout, but within the sourness and bitter bite of the roasted malt, it may be hard to notice it. This is another example of why there should be more sour stouts out there.

Thanks to Whyteboar for this one, from a LIF related to NBS BIF #14. 16oz can (dated 10/7/21) poured into 16oz tulip. Poured a solid black color with about 1/3 inch of tan head that had moderate retention and very light lacing.

The aroma had a Belgian-y funk at the front, supported by solid malts and a nice bit of roast.

The flavor was similar, with the roast being stronger, but not overpowering of coffee-ish. The label called it a sour, but I found it to be more tart than actually sour

The body was solid and full, but a touch less than totally full, smooth, and had a finish that started a bit sweet, but dried out nicely.

Overall, a nice and enjoyable brew. Maybe not for everyone, but worth trying if you see it.

Drinkability was good, especially if you like the Belgian aspects.

T.F: Follows the nose. Tart without being sour. Roasted grains and raspberry. Plum, fig, and spice. Faint dark chocolate with some funk and mild acidity. Zesty carbonation... Medium bodied and prickly on the tongue.

O: A really unique tasting brew. Kind of a soured stout with fruit and funk. I've never had anything else quite likely and it's a very nice beer. Jolly Pumpkin know their stuff.

Was actually surprised that this turned out to be a sour stout. Very interesting style. Pours a dark brown with minimal head. A slight bitterness but good mouth feel. Glad I got to try it.

Cellar pull, bottle dated 10/03/18.
This was poured into a tulip.
The appearance was an absolutely awesome dark brown close to black color with an eggshell white to almost tan foamy small head. Had a good pace at dissipating. Left some concave lingering lace.
The aroma was pure bliss - plums with some tart, sour and sweet features then coffee grounds, light dark chocolate, a refined Belgian yeasty tone and a subtle earthy semi-nutty undertone.
The flavor leaned slightly tart/sour but definitely brought in enough sweet and some roast and a delicate bitterness. Light amounts of spicy woodiness came through but ended up leaving an ever so slight touch of of some sticky dark fruits in the aftertaste.
The mouthfeel was about medium bodied with a decent sipping quality about it. Trying to pinpoint why and I'd say it mainly has to do with some of the spicy bourbon character, but even that isn't really that distracting. Carbonation felt pretty good, maybe starting to fall off a bit. Stellar finish of plums - sticky and full on tart/sweet/sour with some dark chocolate fixtures.
Overall, boy oh boy this was an absolutely excellent cellar pull for tonight. I'd say I'm definitely getting better on timing when to pull certain beers.

On tap at Arcadia

Does this beer predate Tart of Darkness? Either way, these were the first beers I was ever aware of that were dropping that sour stout style on us. You get a hefty dark pour with plenty of roasted malt giving it the dark appearance with 1/2" brown head on the top. Aroma of sour roasted barley. A little bit of burnt caramel and chocolate.

The taste is a neat little lemon sour meets dark roasted malt kind of vibe. Some old oak taste going with it, dropping some wood tannin like vibes into a tight dry sour mouth feel. Minor coffee from the malt notes.

A little bit of bitterness, a little bit of smoke noticeable even. This is more of a stout than Tart of Darkness, but ToD has more nuanced cherry cola feels along with that roasted malt and the sourness is also more than just a lemon note, its lemon cherry! Anyways, this is a more expensive, less awesome version of Tart of Darkness. Nice when it shows up at a bottle share, but also not what I'm stockpiling in the cellar (like ToD).

Nose a bit of that over attenuation in the bottle yeasty smell with spices and fruity thing and little chemically, Bruins chocolate and cocoa, marshmallow, nougat, caramel,

On the pour this looks like a big stout, with the black pour only fading slightly on the edges to a mahogany brown, and a tan head. The nose is dominated by the funky notes, though some char slips through, but the taste is all about the funk - if that was dialed by a bit, I think this would be really good, but all I got was a decent stout knocked out of the box by funky flavors.

I've enjoyed a couple of sour stouts, but this one missed the mark a bit, IMHO. I wanted to love it, but the funk was too dominant, again IMHO.

Really nice dark brew with brown head. Way I like a stout to look. Aroma a little funky. Taste is very dry and bretty. Not much stout like characteristics and not sour, just dry and bretty. Ok beer but not quite great in any way.

When I tried this, I was admittedly unfamiliar with Jolly Pumpkin's brews. I LOVE dark beers, especially Belgian brews. I payed a hefty $15 or $20, and was REALLY excited to try it. I chilled it, broke out the tulip glass, popped the cork and poured. It looked great. Beautiful dark brew with a dense head. I took a whiff, and the fun was over. It smelled like the garbage can my folks had for grass on a hot summer day. I took a swig, and it tasted like a cross of blood and vinegar. One more sip was attempted, and the rest was dumped down the drain. Since then, I've learned that JP tends to lean toward sour beers. This was my first experience with a sour. I can't say that my future experiences went any better.

This is a very dark brown to black beer. A slight, quick head leaves a fine ring of lace on an Antiek snifter.

Oak aromas are strong, followed by tart alcohol. Warmth brings out cherries and vinegar, similar to a Flemish Red.

Initially quite tart, sweetness comes into play with cherry flavors. Oak is present throughout the middle as is light roast and chocolate. The finish is long and tart with a slight bitter bite.

Super dry, the finish pickles the palate. Otherwise it is soft with a soft full body and light carbonation.

Somehow, it seems inappropriate for an Imperial Stout to be sour. Whatever the classification, this is a tasty and contemplative treat.

Purchased in Tallahassee FL, consumed same day. 1 pint bottle poured half and half into snifters. Bottled December 8, 2015 and drunk April 22, 2017.

L: Pours black with one-finger dark tan-to-brown head which quickly fades to thin lacing. When lit the body reveals a very dark (as in phone flashlight barely shone through) garnet-red.

S: Brighter smell than one might anticipate, even from a sour stout. Cherries, cloves, cinnamon, dark chocolate, black coffee, and black currant all evident. Distinctive alcohol notes on the very end.

T: Very much the same as the nose. Cherries, currant, yeast, black coffee, dark chocolate, cloves and cinnamon more limited on the palate than the nose. Lingering notes of black coffee and roasted malt.

F: Smooth, but with substantial acidity. Back of the tongue/throat definitely picks up more of the bright acid and alcohol esters.

Overall: A very interesting and well-balanced Belgian-inspired stout. I have had plenty of beers that try for the "Belgian-inspired" badge only to produce overly-yeasty and boozey chuggers. Jolly Pumpkin's Madrugada Obscura is definitely worth the money if you're a fan of Belgian sour stouts.