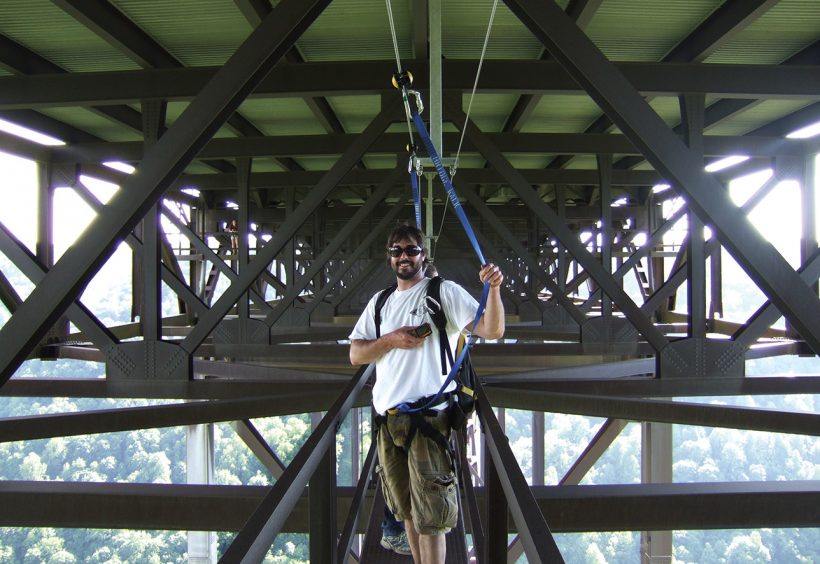 Nathan Herrold on the catwalk under the New River Gorge bridge, the bridge that Bridge Brew Works is named after.

Collaboration is not a trend among craft brewers—it hits at the crux of what the craft brewing community is all about. And at one brewery, the power of collaboration is truly embraced: Bridge Brew Works in Fayetteville, W. Va., where co-owners and brewers Ken Linch and Nathan Herrold combine their talents to produce some stellar beers in a state where microbreweries are few and far between.

Community Collaborators
While Linch and Herrold worked together to develop Bridge Brew Works’ portfolio, the brewing duo wouldn’t be real collaborators unless they brought in different brewers to come up with something unique. There was just one problem—there aren’t too many breweries near Fayetteville.

“If you look at the state and where breweries are located, there’s nothing around us in West Virginia,” Linch says. “We figured we’ve got good tourism here, and people from out of state, a lot of them, have their own local brewpubs and breweries. When you’re traveling, you like to try out the local beers, and we felt that this area … had a pretty good opening for a small brewery.”

One of Brew Works’ first customers was a local restaurant, Pies and Pints, that specialized in gourmet pizza and craft beer. The restaurant’s owners were happy to see a new brewery launching close by, and quickly put Brew Works’ beers on tap. When the folks at Pies and Pints expressed an interest in brewing their own beer, Linch and Herrold were happy to welcome owner Dave Bailey and employee Ryan Heastings in to collaborate on a brew.

The result was a hoppy Pale Ale, a departure from Linch and Herrold’s more balanced and malt-forward approach. Part of the project was to have fun and brew interesting beer, but from a business standpoint, Linch sees the collaboration as an opportunity to work with customers on a more intimate level.

“There is a certain amount of wanting to do business with the locals as much as we can,” Linch says. “We do try to go around and do a little video or take a picture of us at their establishment and help them with their sales. We try to be active on Facebook and try to pump them up as much as we can. I think they appreciate that—it’s a hands-on approach that they certainly don’t get from the macrobrewers and distributors. I think that’s a value added that we can offer.”

Linch and Herrold recently collaborated with West Virginia Beer Judge Certification Program beer judge and homebrewer Rich Ireland on a Kölsch. Brewed with German malts and Noble hops, Ireland developed the recipe during one of his many trips to Bavaria.

Two-Headed Beast
Linch and Herrold’s daily operation is an exercise in collaboration. The duo officially started pumping out beer in January of 2010, and they’ve been discovering their own niches within the company ever since.

“It’s a joint effort,” Linch says. “Maybe that’s surprising to people, that we work really closely together on both aspects. My background is in engineering, and Nate’s background is in business management. His father ran a business, and so far, it’s been a pretty good match. I’ve had plenty to learn from him on brewing on the big-boy scale, and there’s a lot—anything that requires math skills and some other computer skills or whatever—that I can pick up the slack there.”

Although both are longtime homebrewers, Herrold, the younger of the two at 37 to Linch’s 50, brings the professional brewing experience to the group. He got his start at a brewpub in Morgantown, W.V., called West Virginia Brewing Company, which has since switched owners and names. But Herrold also brings in the bold personality that served him well as a white-water river guide on the nearby New River Gorge (the brewery takes its name from the iconic New River Gorge Bridge).

“I think it kind of helps in the personality aspect in order to sell your product,” Herrold says about the personality quirks that go along with somebody who spends his summers guiding tourists through rapids and on fishing trips. “When you’ve got to cold-call somebody on the phone or you go to a potential account, I think it’s given me a lot of confidence to do that.”

Linch and Herrold have found a way to effectively blend their unique skill sets and personalities to the point where brew days have become a quiet affair that hardly requires any back-and-forth between the brewers as they perform their roles in a monastic manner of quiet collaboration—and this harmony is on full display in the beer.

Brewed to Style
So many new brewers boast that their beers do not fit comfortably into style guidelines. This attribute of craft brewers seems to represent a sentiment that since the brewer is already bucking conventional beer (what American adjunct lagers became in this country), he or she may as well buck all conventions and brew truly out-of-the-box and expressive beer.

That approach does not sit well with Linch.

“There’s 300 or so recognized styles of beer around the world,” Linch says. “In this area, and I think it’s similar around the country—there’s some small breweries or brewpubs that are putting out beers that they don’t necessarily classify into a style. I loosely consider that beer to be hippie beer. “To me, that’s a slap in the face to brewers and recognized styles. That’s not to say we won’t put something out that is in-between styles, but we feel there’s enough known styles out there that we don’t need to hide behind anything. If you use the best ingredients and make an honest product, then you can stand behind that.”

For that reason, Bridge Brew Works’ two flagship beers, available only on draft, focus on using traditional ingredients to create traditional beers. Linch describes the Long Point Lager as a Dortmunder. It is brewed with German malt and Noble hops in the late additions. Bridge Brew Ale is an ESB brewed with Scottish malt and English hops for flavor and aroma.

“We definitely try to make strides in those directions,” Linch says. “Like I said, they’re recognized styles and we feel—especially just starting out—that we kind of need to prove that we can brew a beer to style. Maybe later on, if we want to do something more creative, people will follow along a little better than if you start off brewing with, I don’t know, raisins and crazy stuff.”

Linch and Herrold do step out from the style guidelines a bit with their latest beer, which was still pending label approval at press time, dubbed “Trubell.” At 11 percent ABV and fermented with a Belgian yeast strain, it comes off like a Quad, except it’s pale. And it’s one of a handful of higher-gravity beers brewed by Bridge Brew Works that finds its way into 750-mL bottles.

With quality beer focused on traditional values, Linch and Herrold are banking on the fact that trends will pass, but great beers live on.

What He Said
“Considering the small population of the state, I think we’re doing pretty good. We’ve had to order kegs a number of times now. We’re actually waiting now. We could have done more this summer if we had some more cooperage space.” —Bridge Brew Works co-owner and co-brewer Ken Linch on his brewery’s growth over its first 17 months of operation ■ 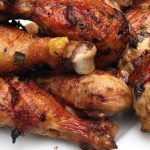 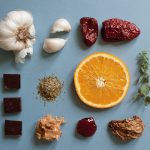