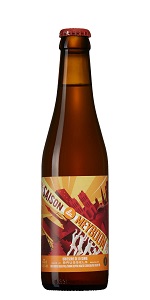 Hazed pale orange, ample foam with lasting coverage, spotty lacing.
Soft, yeast driven aroma, estery pear and lightly floral.
Malty taste, vague fruitiness and not a lot of hop presence.
Medium bodied but easy drinking, airy carb and light feel.
Overall it’s not as wild or hoppy as their other beers, but it’s simple and refreshing, which is nice in a world of excess.

Today is the occasion of my New Odds & Sods Beer Sunday (Week 711) & this is my first of the eclectic lot of bottles & CANs that will follow over the course of the day.

From the Bottle: "Unfiltered Blond craft beer, refermented in the bottle. Pour without the sediment - it can be drunk separately. Store in a cold and dark place. Enjoy its freshness: Do NOT age this beer!"

Ooops! Mine has some age, but if it is bottle-conditioned, I will be curious to see what has developed as a result. I began by Pop!ping the cap & starting a very slow, gentle pour into the awaiting glass. I think that the yeast was STILL active as it began with a soapy foaminess, but quickly puffed into just over a finger of dense, foamy, bone-white head with excellent retention. Color was Straw-Yellow (SRM = > 2, < 4) with NE-quality clarity as a testament to my pouring skills. Nose was VERY yeasty, kind of musty, but less like barnyard and more like proofing bread dough with a papery mustiness! Wow. Mouthfeel was medium. The taste was quite spicy, almost like black pepper, but that would be imprecise. It definitely had a papery mustiness, like old newspapers from the attic, as well as a distinct breadiness, but the barnyard funk was very muted. It was MUCH more to my liking as a result, but it was kinda out of whack for the style. I am not going to dun them, since it may have been due to my failure to follow their instructions. I suppose that the bottom line there is that if you don't need a lot of funk in your Saison, then age away! Finish was crisp & dry, but not so dry as to be gasping, which I also do not like. This would have been fantastic during some of this past Summer's hot, humid days, but it was still enjoyable on a cool, crisp Fall morning.

And now, for the lees pour: I had a nice, murky glassful of mud! The nose was more pronounced in terms of its doughy breadiness. Mouthfeel was rather full, almost creamy. The taste was oddly bitter, as though the hops had gone to rest with the yeast. Finish was quite dry. Enough. I am ready to move on.

Poured into a Fremont small snifter. Pours a hazy golden/straw with a fine two finger white head with great retention and thick lacing. Aroma of biscuit malt, grassy hops, saison yeast, light lemon and mineral. Flavor is grainy biscuit malt, grassy hops, lemon and grapefruit rind, apple and pear. Flavor tapers off into a dry and slightly astringent finish with residual citrus rind and grassy hops. Medium bodied with sharp carbonation. Look, aroma and initial taste are all standard saison profile, but the nice supporting grain and fruit flavors do not continue into the finish, which leaves the hops a little stark on the tongue. Overall a nicely made, semi-dry saison that's a little hoppier than normal. This is a Shelton Brothers distributed ale, so the hops may be a little tired, contributing to the finish.

Just had a Revelation that explains the great differences between my two styles with the most Hads.
First... American IPAs (which I rarely drink a second time), I also usually do not eat with foods as the hops interfere with subtle foods and further inflame my mouth when eating spicy foods.

For the second style, saisons are what I usually pair with garlicky, herbal foods. Since I try to drink when I eat, that explains why saisons are the style that usually I buy a 4 or 6 pack... and rarely do that for any other style.

Saison du Meyboom Looks like a good saison, murky and blonde. Smell improves as it warms and I get more of the yeast effect producing a fruit medley. Taste comes in the same... although there is a tad more hops than I prefer. But the hops are handy in cleansing the palate and preparing it for more herbal food. I will have Saison Du Meyboom again.

I've Had 9 beers from de la Senne, so I went on their website. They are truly independent and brew their way, experiment a lot and don't compromise. I like their attitude, but they need to use less hops before I buy their beer in a 4 pack.

A: The beer is rather hazy pale light yellow in color, and somewhat resembles lemonade. It poured with a short, dense white head that died down, leaving a thin collar around the edge and lots of lacing down the sides of the glass.
S: Moderate aromas of floral hops are present in the nose—marigolds seem to stand out in particular—and some hints of citrus are also noticeable. The smell becomes stronger as the beer warms up.
T: Similar to the smell, the taste is filled with flavors of floral hops and has a light amount of associated bitterness.
M: It feels light- to medium-bodied on the palate and has a moderate amount of carbonation.
O: This beer is very easy to drink and has nice floral aromas and flavors. I found it to be a very interesting saison.

The beer is a pale straw yellow. It’s fairly hazy. Large white head of fine foam. Lots of lacing and very good retention. The aroma is fresh, pale grain and mineral/grassy hops. Light earthy yeastiness. A little bit of dust in the mix. The taste is moderately dry with a bit more bitterness than expected. Herbal, grassy hops. A bit of cider. It’s all a bit simple but it’s a nice enough simpleness. Refreshing. Light on the palate. High carbonation. A simple, very pale, euro hoppy saison.