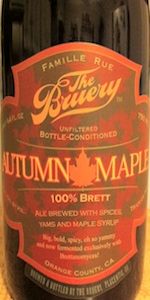 Opens up and pours autumn/rust colors in a ruddy way with 1/4" light brown head. Aroma isn't bad, has that Thanksgiving holiday season kind of vibe for it, brett isn't noticeable, but the alcohol is.

Holy shit, how is this so bitter and alcoholic? The aftertaste just keeps getting worse mouth feel wise. I guess that is yams I taste, I do not like. The bretted version just seems to be more bitter. Not brett affected taste wise. Overly syrupy and sticky. Some brown sugar. Caramel around the end. Just kind of a failure as a brett beer, and then the base wasn't much to sneeze at either. Pass. One of the worst beers ever from the Bruery.

A- pours a deep reddish-brown color with some rust color around the edges. Small fizzy white head quickly reduces completely, leaving nothing behind

S- aroma of stewed cinnamon apples with brown sugar, ripe pear, ketchup, molasses & apple cider. There is a big vegetal aroma that kicks in near the finish, perhaps from the addition of the yams, along with some booze, dried leaves & fig. The aroma is quite complex, it's just all over the map with no rhyme or reason

T- sweet and malty up front with notes of molasses, brown sugar and caramel. Fruity notes of baked apples and pears kick in, followed by vegetal yam flavors, hickory smoke & BBQ sauce. As it nears the finish, a sour apple tartness kicks in before eventually finishing dry with a linger of yeast & dark fruit

O- this one was just all over the place. It's actually pretty good, I just can't figure out what the goal was here. I've never had such a variety of aromas/flavors from a beer. Worth a try, but I prefer regular AM to this one

Reviewed by ThreeLions from Massachusetts

A: Pours into a Treehouse tulip a reddish brown, dark rusty hue with a minimal but head that dissipates quickly. Limited legs, no lacing.

S: Very odd smell on this one. Notes of ketchup, apples and bbq sauce. Very smoky molasses like. Not even a hint of funk from the brett.

T: At first the taste is fairly pleasant. Very nice apple, hickory, bbq like glaze followed by a just awful aftertaste. Very oddly bitter, slightly metallic, just off flavors that ruin an otherwise interesting and acceptable taste at the forefront.

O: This wasn't at all what I was expecting. When I see anything that says 100% Brett my eyes go wide but there wasn't really even a hint of Brett, unless you consider the extremely odd/off aftertaste. It's too bad too because this starts off really nice. Not at all the type of beer that I would want to drink again but was fun once. The lack of Brett/good Brett flavors combined with almost no carbonation and apple cider, molasses bbq sauce flavor would really hinder me from wanting to try this again. Definitely wouldn't purchase if given the opportunity.

Overall eh, not as bad as I expected, but still meh.

A - Poured into a Kate the Great tulip a crystal clear darker than rust hue with a quarter inch head that faded to leave a creamy halo and light wisps.

S - Aromas of caramel, malt sweetness, spices, vanilla, vegetative notes. No brett, not nearly as bad as I thought it would be.

T - Taste is similar to the nose, molasses, apples, vegetative, caramel, an almost Bbq sauce. The more I drink it the less I like it, very poor aftertaste. Without the aftertaste this beer wasn't half bad.

M - Mouthfeel is a bit heavy and syrupy.

O - Overall this beer was not half bad, until I got to the aftertaste. A shame, still, a fun old beer to try.

A - Pours a brown-caramel with a few large bubble that quickly fade away.

T - Spices first, then caramel and vanilla, maple and some Brett.

O - Bretty played nice with the spices and sweetness.

3.79/5  rDev +3%
look: 4 | smell: 3.75 | taste: 3.75 | feel: 4 | overall: 3.75
Sampled March 2012
A steady pour into my Lost Abbey Teku glass produces a one finger thick, amber tinged, tan colored head. The beer is a rich, concentrated, but definitely amber color that shows an almost brilliantly clear, pale, cranberry-juice color with gold highlights when held up directly to the light. The aroma smells of cinnamon, brown sugar, graham crackers, sweet ginger, and an interesting fruity base that has touches of lemon, perhaps touches of melon, but really I can’t help but think of fresh out of the oven rich, red, brown sugar sweetened, sweet potatoes. There is a hint of medicinal character here, and perhaps some mustiness; the former is brought out by the spices, but like the latter, it is also likely here due to the Brettanomyces. The Brett character is fairly subtle in the nose overall though.

This has a nice prickly carbonation, which couples well with the light sweetness, and medium, somewhat viscous body. The spices contribute a bite to the finish that is a bit woody, and seems like nutmeg and perhaps a touch of allspice like character. There is a ginger bite to this beer as well, though this is not overly aggressive. The spices do somehow contribute an almost dusty (perhaps saw-dusty?), woody note in the flavor. There is a soft tartness to this beer, that while subtle, couples quite well with the sweetness. The sweetness here is brought out by the spices (cinnamon, ginger, and nutmeg predominantly), but really reminds me of sweet potato pie; there is a sort of earthiness, not quite fruitiness. Ah, I just realized, some of the woody notes in the finish are contributed by the maple, which definitely contributes to the flavor here. A touch of Brettanomyces phenolics perhaps boost the woody notes and adds a touch of medicinal character and mustiness towards the finish; all in all though, I would be hard pressed to guess that this was 100% Brett fermented, there is that touch of tartness, but the funkiness is actually quite subtle. The malt character plays a pretty prominent role here, but there are so many other things going on that it is easy to over-look; flavors of brown-sugar coated sweet breads, graham crackers, English biscuit notes, and a chewy, whole grain character all are quite noticeable once you pay attention to them.

Quite tasty, despite the Brett character being quite subtle here, I am really enjoying this beer; I like the touch of tartness, and the subtle hint of funk that is brought to this “holiday-inspired” base beer. I also like that the spice character, while playing a prominent role here, does not overwhelm the other flavors.

Mixing a sweet and spiced drink with the relative wild card of Brett? I'm down if you are. This stuff pours a lightly hazy sunrise auburn topped by a short finger of khaki foam. The nose comprises maple syrup, caramel, light biscuit, brown sugar, cinnamon, clove, allspice, and a touch of funky fruit in the background. The taste brings in more of the same, with the usual sweet and spicy Autumn Maple goodness up front and the new orange-y fruit of the Brett bringing up the rear, along with a tiny hint of cedar. The body is a solid medium, with a rather light moderate carbonation and a smooth, nearly slick feel. Overall, an interesting take on Autumn Maple, one that shows that Brett use doesn't immediately equate to high levels of funk and whatnot. I still prefer the usual version, but I enjoyed this one nonetheless.

Aug 11, 2013
Rated: 4 by GonzoHomebrewer from Massachusetts