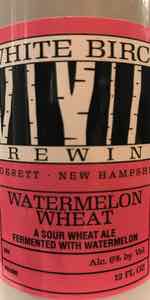 Watermelon & sweet strawberry flavors up front; faint carbonation bite on the finish. Sugar settled on my lips over the course of the session.

Bold for a watermelon beer, with the carbonation bite preventing a cloying effect. This would serve a summer day quite well.

Can into a snifter appears clear golden yellow with a white cap.

Light body modest carbonation. To this brews credit, it doesnt have any off character making it undrinkable like white birch beers if the past. Having said that, it also doesnt taste like beer, its like club soda that someone dissolved watermelon jolly ranchers into.

Very strong aroma of watermelon, pours a slightly cloudy straw color with a white head. Sharp tart flavor to begin with, fading over to watermelon in the finish. Light bodied beer, with enough carbonation to lift flavors from the tongue. An interesting fruit to use for a sour beer.

A thanks to the captain of the canquest, woodychandler, for this beer. Poured from a 12 oz. can. Has a yellow/whitish color with a 1 inch head. Smell is of watermelon, somewhat sour. Taste is watermelon, sour, some saltiness. Feels medium bodied in the mouth and overall is a decent beer.

Pours a hazy yellow with a healthy white foamy head. Jolly rancher watermelon aroma filled the air, the smell is huge with the fruit, with some sour notes. The taste is big and complex, sour up front with a strong watermelon finish, with a lingering watermelon aftertaste. The wheat is subtle after a few more sips after taste buds have adjusted to the sour notes. Mouthfeel is light, bubbly, and refreshing, great for this beer. Overall I am really impressed by this beer, it was given as a gift, and I am a bit disappointed that it was a limited release. Recommended for sour or fruit beer fans.

Bump the Hump! This is #WatermelonWednesday & if you CAN help to celebrate, feel free to do so! It's a CANQuest (tm) thing, but bottles are okay also. Just no camel products! The CANQuest (tm) is back in action and New CANpshire is now in the crosshairs!

From the CAN: "A sour wheat ale fermented with watermelon"; "At White Birch Brewing, our goal is to create great beer for the enthusiast. Each batch is brewed and bottled by hand at our brewery in Hooksett, NH."; "The urge to create is what drives us to be brewers. When that urge strikes, we fire up the kettle and make a small batch ale."; "The story behind each small batch is detailed on our website. We hope you enjoy this look into the passion of what drives us to brew. [undersigned] Dave Herlicka".

I agitated the beer in the CAN before I Crack!ed it open, which not only helped to get everything back into suspension, but it also caused some foaming through the vent. As such, I was reluctant to go with an inverted Glug, but even a CANparatively gentle one raised just under two fingers of foamy, bone-white head with modest retention. Color was a cloudy Straw-Yellow (SRM = > 2, < 4), proving that my efforts were paying off. Nose left NO doubt that watermelon was involved, but it had a perfuminess, like the time that my babysitter & her friend sprayed each other with watermelon perfume. Mouthfeel was medium, big for the style. The taste, while definitely borne of watermelon, was not as sweet as th nose had led me to expect. Instead, it had a Gose-like saltiness that helped to cut what might have otherwise been a too-sweet taste. My late Pops used to put salt on watermelon for the same purpose & I never really dug the CANcept until now. Finish was dry, tart and slightly salty. It would be a perfect thirst-quencher on a hot, humid summer's day (but one would be enough for me). YMMV.

Very highly carbonated unfiltered wheat beer. Modest head that disappears in a flash. Tart watermelon taste up front leading into the wheat flavor with a hint of lemon in the background.

A - Pours a pale cloudy golden body, less than a finger of quickly dissipating bubbly white head. No real lacing to speak of. Appears adequately carbonated. A standard sort of appearance, but it looks very nice.

S - Fresh aroma of watermelon smacks the senses before the beer is even poured. In the glass, clean notes of grainy wheat, green melon, & a slight note of sour candy.

Overall, very delicious drinking. Very authentic watermelon flavor. Simple, but to the point. Very refreshing stuff. I could drink a ton of this on a hot summer's day. Highly recommended.

L: Hazy straw with a fairly quickly dissipating white foam collar.
S: Big watermelon nose with some wheat in the background.
T: Slight bitterness and then a big burst of watermelon seasoned with a dose of lemony tartness. The flavor advances in waves with the watermelon sweetness alternating with the lemony tartness for a very refresing and interesting effect. F: Refreshing, light, highly carbonated.
O: I was open to a watermelon ale after having agua fresca de sandía (Watermelon water) served from a barrel shaped clear container at several markets in Mexico and have made it in the past. White Birch takes this a step further by brewing it as a sour ale. It actually works very well.

Has the most intense watermelon aroma I have ever experienced. I don't think you could find an actual watermelon that smells this much like watermelon!

On tap at the brewery.
hazy deep straw color with a huge frothy white head. the flavor is more berry than watermelon with a sweet bread wheaty spiciness underneath. Not half bad for a fruit beer.