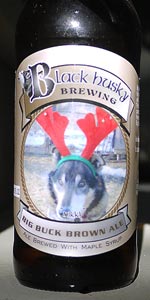 Appearance: light brown with pouring but then dark brown in the glass. A light pancake batter colored head.

Aroma: very malty and sweet with tangy notes of rasberries. No maple though.

Taste: starts sweet and slightly tangy. Notes of raspberries and molasses. No maple but the heavy sweetness must be from the maple and malt.

Overall: did not expect the notes of raspberries. Some may use this as an indicator of infection, but I say its far from infected. Really tasty brown ale with layers of molasses and berries. Keep it up Black Husky!

On tap at Blue Moon, Madison. Exceedingly well-done, Black Husky. Every inch deserving of the strong scores seen below.

(By the way, most of your fans point to Sproose. Howler is my favorite. Please bring it back.)

Dangerous. If I had to choose one word to describe it, dangerous. So tasty and quaffable, yet serious in potency.

Sure hope I can find a few bombers in Madison shops. I'll email you to find out where. I'll be giving this as gifts to shock friends with my divining rod of hidden-gem brews. (Nah. I'll drink 'em.)

Taste - The toasty brown notes start the taste. There is maple sweetness, but it is light. I detect some bread and yeasty notes which give banana impressions. The toasty notes continue in the aftertaste.

Mouthfeel - The carbonation cleans up the sweetness. It seems a little thick for a brown.

Overall - I was hoping for maple, otherwise my purchase of a brown ale would have been less likely.

Big Buck Brown is a dark, murky beer. A dark brown body is highlighted with chestnut when backlit. This is one murky beer. It has the same amount of murk that an unfiltered apple cider would have. A frothy beige head forms atop the body and peaks at a finger in height before fading to a skim coat.

The nose is pretty bold and certainly unique.Big, dense, doughy, sugary dense cake gets things going. I'm thinking gooey fruit cake without the fruit. Rich caramel and big notes of toast combine with vanilla and caramelized brown sugar. Raisins and brandy. This guy really opens up. A touch of hazelnut and vanilla wrap it up. This beer smells like a rich dessert.

Rich caramel and toast kick it off. An herbal hoppiness washes through the middle while caramelized brown sugar and the vanilla nuttiness make their presence known in the middle. It's a tasty brown amped up all around. Big flavor, though the same as other browns. It's on the sweet side and while the herbal hoppiness comes close to balancing it still leans toward sweet.

The body weighs in a notch above moderate with a little viscosity. Carbonation is fairly tight which cleans up any of that residual sweetness that's thinking about lingering. It's a pretty easy drinker with zero signs of alcohol.

Big Buck Brown is a good beer from the coulple at Black Husky. It's complex and bold in the nose though not quite as much in the flavor. It's drinkable and enjoyable. I'd probably pick this one up again in the future.

A- Medium brown body, tapioca coloured with a two finger medium brown head that has good retention time. Leaves bits and splotches of lacing as well. This looks like just about most other brown ales I've had. [3.75]

S- Sweet tapioca, brown sugar and malt sweetness without any kind of graininess. A bit of roast, definitely a fair amount of nuttiness. Very smooth, simple sweetness of brown ales that is accentuated by a nice subtle maple syrup sweetness that isn't overwhelming. There is also a mild earthy bitterness; no citrus like I'd expect from some "American" brown ales but rather more in the British tradition. Smells pretty straightforward for the most part, well-executed and meets any possible expectation you could have from a bigger brown ale. [4]

F- Mild bitter earthiness comes up front, quickly tempered by that prototypical brown malt sweetness evoking a nice tablespoon of brown sugar, hints of molasses and a slight bit of black coffee bitterness; as well as a nice nutty flavour. Not a ton of roast, but it is definitely there if you look for it. There seems to be a small "zone" where you can taste a nice punch of maple syrup. Mind you, it's not exactly Vermont fancy maple syrup flavour or even Mornin' Delight/Good Morning maple syrup levels, but it's definitely there and smooths out the flavour. The finish returns to where things all started, that mild earthy bitterness that I have come to expect from brown ales that I tend to enjoy the most- the ones that take after the recent English tradition. This is sweet without being cloying and a very flavour-forward brew. [4]

M- One of the thicker brown ales I've had. On the thicker side of medium, not syrupy but certainly slick and substantial in its presence. The maple and bitter earthy hops seem to go together fairly well at the end. This, despite being a brown ale, is bit of a sipper. I'm almost ashamed to say that the flavour is quite robust and is worth enjoying more as a sipper than a guzzler. But I'm not, because I'm enjoying this one. [4.25]

O- Nice big brown ale that brings a new, slightly different dimension with the maple syrup. It's not a big maple syrup bomb like the hyped up beers that change hands for.. well, arms and legs, but this is a robust beer at its base that benefitted from the addition of an adjunct that does not overpower its inherent strengths and intensity but rather accentuates it perfectly. Very good brown ale that I would be happy to drink again. [4]

Poured from a 22 oz bottle into a snifter.

A - A dark brown with a 2 finger brown head. A thin cap remained for the session and there was a good amount of lacing.

T - A nice brown ale flavor with some roasty malt. Rich brown bread with hints of nuts and a touch of maple syrup. The sweetness is held in check by the mild hops.

O - This is a very nice and malty brown ale. It isn't too sweet and has some roastiness. Hints of maple syrup make it a great beer to drink in the fall/winter months.

S - sweet malt, caramel, a hint of coffee, no alcohol on the nose

T - caramel and malt up front, not too sweet, some bitterness from the hops in the finish

Poured from a 22 oz bottle into a CBS snifter. Server lightly chilled.

A) A very deep dark brown. There was a little over a finger of light tan head. The head popped and fizzled away to a thin collar. Decent lacing.

S) Brown bread, toast, milk, sweetness that is a hint of brown sugar and maple syrup.

T) This has a creamy/lactose taste that melds nicely with roasted malt. You get a hint of the maple syrup in the sweetness. It is a bit woody, and has a little hops on the finish. The 8% ABV will sneak up on you, because it is very well hidden.

O) This is the second offering I've had from Black Husky Brewing, and I have to say that I have been very impressed. I'm not sure where Pembine, WI even is, but my fridge would be full of Black Husky beer if I lived near there. If you like brown ales, and can find this one, drink it.

M - Light to medium and creamy. The creaminess makes it feel lighter than it is.

D - Complex but simple and easy drinking at the same time. Didn't read the label before I tried it and had to double check after tasting the maple syrup. Close tie between this and Spoose Joose as my favorite Black Husky beer.

Creamy smooth feel, some lactose in there possibly. Dry finish with a slight bitterness. Husky toasted grains and multigrain bread, light dried fruit and woody notes, mellow and flavorful. For a brown ale, this is really tasty. Easily sessionable, and very surprising that it's 8.0%. Pretty impressed with this tiny brewery's output so far.