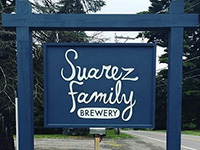 The building is fairly nondescript as you pull up. Down the gravel driveway there's a small parking lot to the right, and then more parking in back, and beyond that some outdoor seating. Back inside the tasting room you'll pass the bathrooms on your right and just ahead of you is where you order. There are large windows facing the street, and the room has a very open feel to it. On the far wall is what looks like the back drop to a theatrical production with nothing more than a column on each side looking out over a beautiful, surreal landscape. It reminds me of Rivendell from Peter Jackson's film version of The Lord of The Rings. There are simple long tables and chairs laid out, and you sit where you can find a space, German-style. It's a very nice, warm and comfortable space where you can relax and enjoy a beer or two.

Such amazing beer and service, just kind of a quiet, weird vibe. Reminds me of a library in Chelsea. Would love for it to be a bit more live, then quiet and awkward. Beer is phenomenal though, so no complaints. This is a must!

Vibe: I stopped by the taproom on an early Friday afternoon. They have a couple of stand up and sit down tables and most of the people seemed to be stopping by for short durations, primarily coming to pick up beer to-go.

Quality: Beers were served in glassware at the proper temperature.

Service: The service at this place stands out and is very orderly and efficient. You place your order of beers to stay/go at the bar and they take your name, calling you when your order is ready. If you order beers to-go, they'll have a box for you that you can carry out.

Quirky little place that isn't a very comfortable place to hang out but has great beer.

What a great brewery in the middle of nowhere. The place is packed and yet the service is awesome. Friendly and helpful staff. Excellent selection of beers,. Unfortunately they do not offer flights or half pours. They had a couple of vintage beers in 375ml bottles for on premise consumption only. Family friendly atmosphere as well.

The beers are pristine, crispy little beers as well as some elegant farmhouse style beers.

I live about 3 hours away, I love this place so much that my wife and I have discussed buying a house in the area. Keep in mind that the brewery is located in the middle of nowhere in upstate NY. I love the hazy IPAs and dessert stouts but dan’s brewery is my all-time fave.

Brewery was absolutely terrific. Staff was super friendly and accommodating to my 3 sons. They brought over toys, and were super friendly throughout. I’d most highly recommend visiting for Greer beer and vibes!!

So, it's hard to give this a fair rating since I went on a Saturday AM in Sept right after open. It seems like the vibe would be excellent if there were 20< people, but on this day there was a bus, full parking lot and about 50 or so fellow beer drinkers. So it certainly wasn't a relaxed or family friendly vibe, not because of the brewery, just too many people in a small space. Would love to go back on a weeknight or a chiller Sat.

Service was as good as to be expected when there is a 15 or so person line that kept growing as the minutes passed. Had one cashier who was ringing people out, then it looked like one person boxing take home beer and maybe 3 or so working on pours. Pours were delicious but we did not have the appetite to wait in the line again for a second round so we took our take home beer and began the journey home.

I kind of expected this but I also feel a little bummed. Listening to podcasts on Suarez and reading articles, I was really looking forward to my visit, and I got some damn good take home beer that I can't wait to open, but my 45 or so minutes there weren't all that enjoyable (outside of the beer). I know they have some plans for the back with a beer garden, let's hope that can help with the vibe. Even some outdoor barrels and maybe another pour station would go a long way. And if they ever get tacos....lookout!

I'll be back and update the review based on my second time there.

This was a pretty quick visit for me, but I got a decent idea of what was going on. Despite being fairly close to civilization--as opposed to say Hill Farmstead, from whence the brewer here had a tenure--this little brewery has a feeling of bucolic charm and isolation. Honestly I haven't had too many of their beers yet, and I didn't even have time to sit and enjoy any at the brewery. But those few that I have had have all been very good and true to style. Even the pilsners are very good, and that's not a style I typically praise. Service was quick and friendly (I was picking up a quantity of bottles and cans).

For me, this is a pretty easy pit stop on the way back from VT, so hopefully I will be able to revisit and stay a bit in the near future.

Was in Albany New York today and figured if I'm this far South in New York, I might as well head here. I've heard more than enough fabulous things about this place. Honestly, I liked the décor of the place, but I have to admit it was a bit loud most of time. And then I got extremely hot as my experience continued on in here. I was wishing someone would have opened a window, to be honest. Still, what made up for my experience in here was that I got to meet Dan Suarez as he handed me my growler of Round the Bend and Merkel (Balaton). That made up for the heat in the building and the loudness. I'd go back for their beer, most definitely, but honestly don't see myself hanging out here. Service was quite good in here.

Stopped here after hitting up Sloop, the place is like an old garage type of building it seems. The decor is minimal, it feels kind of like a sterile environment to me which I guess is ok but not really my jam. The place also had an aroma to it that I hadn’t smelled before since I stopped once at Grey Sail Brewing... I’m not sure if it’s some old spent grain that needs to be discarded or what but it didn’t really help the vibe in my opinion. The service was friendly and attentive. The selection was good, all low ABV offerings which isn’t necessarily a bad thing since most people will probably drive after being there.

I am not sure when I walk into the place that it's evident the strong reverence I feel for beer in general and Suarez Family beer in particular. I get this rush of anticipation that feels almost spiritual, which I know is an odd and somewhat outlandish thing to say about beer. It is the truth of things, though, and this old hippy has always just gone for what hits that inner place of true happiness and satisfaction and I would be less than honest if I didn't proclaim/admit that Suarez beer does that for me. As a home brewer I don't carry any feelings of competition with Dan Suarez, while having all the ability to appreciate everything in the beer he makes. This means I have the ability to worship without envy, and I do. The beauty and craftsmanship in Dan Suarez beer makes me appreciative past words' abilities to express. Best beer made in the best beer state in the best beer country. An unmatched pleasure to visit the taproom and to drink at home.

Located in a beautiful rural setting, Suarez Family Brewing has the aesthetics to match the quality of its beers. I parked around back behind the building and walked in shortly after opening on a Friday afternoon. A wave of calm seemed to come over me upon walking in, as right away you can sense the vibe is laid back. The building itself is very unassuming, with a few long tables to sit down (or stand) at and a small counter to order your beers from. The beer list is tacked up on the wall behind the bar. When I visited, they had eight beers on tap: two German pilsners, a keller lager, three pale ales, a porter, and a "country beer" brewed with buckwheat (Suarez's take on a saison). After ordering, you'll take a seat while your beer(s) are poured in the back, behind the counter.

I started off with a Palatine Pils, their classic German pilsner. Served in an 8 oz (25 cL) Willi Becher glass, as are all of their beers except for their "country beers" which are served in a tulip. Top notch stuff! Poured properly with a large frothy head, the beer was fresh, crisp, balanced, and immensely drinkable. It was as good as any German-made pilsner I've ever had.

Shortly after finishing my first beer, a woman walked in with a basket of freshly-baked pretzels and set them down next to the counter. For $3, you get a small but delicious pretzel sprinkled with coarse salt and sesame seeds. A perfect accompaniment to one of their lagers.

I rounded out my visit with a Ms. Frank (keller lager), Round the Bend (porter), and Hecto (dry-hopped pale ale). Each one as elegant as the last. It's obvious the attention to detail in crafting these beers is of the highest order. I could have sat here all day and run through the entire gauntlet of offerings; something which is not impossible given the low-to-mid range ABV of all the beers and the 8 oz servings.

They had six bottles for sale, t-shirts, and a couple of glasses. People were coming in and out for growler fills, and I believe they will fill any growler as long as it's clean. Before leaving, I got a growler fill of Qualify Pils (hoppy German pils), a bottle of Merkel (cherry country beer), and a Suarez-branded Willi Becher glass.

A successful visit to a brewery that can seem to do no wrong. If you're a fan of lagers, they're making some of the best ones around. And if you're not a fan of lagers, their ales are just as worthy of making the effort to try. If you ever feel like you need a day off from life, take the scenic drive up to their brewery to sip their beers while gazing out at the country surroundings. And don't forget your growler so you can sip at home while reflecting on the great day you had!