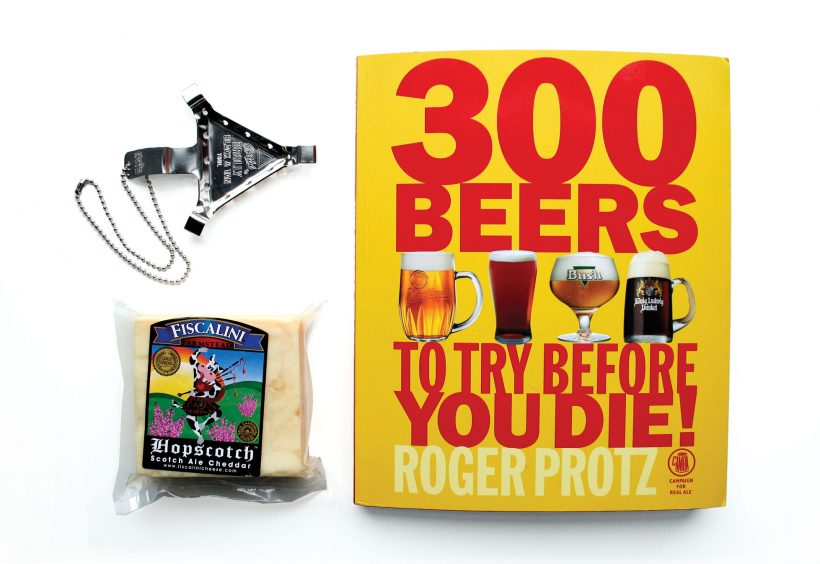 Bass Brolly
If only the ball-chain were a bit longer to slip over the head, this contraption could easily fly as a fierce object of bling. The Bass Brolly (formally referred to as the “Bass Brolly Black & Tan Tool,” as it’s crisply embossed on the top surface) is a thin, formed, perforated piece of steel that’s shaped like Bass’ traditional triangle. Three extended legs are designed to hook over the beer glass’ rim securely. This item has one purpose, and one purpose only: to optimize the even, steady pouring of Stout (the “black”) over a Pale Ale (the “tan”).

Most of us, and probably a good number of bartenders, are quite content to layer the Stout by pouring it slowly over the back of the spoon. But, mind you, for nothing less than Black & Tan perfection, this tool is a cheap way to do the deed right. I did a side-by-side comparison of the spoon technique versus the even dispersion of the brolly. Although the difference was slightly perceptible—the pint via brolly was a bit more uniformly layered—I doubt anyone would publicly shame a spoon-wielder. However, to its credit, the device ensures a consistent B&T every time for even the most shaky-handed amateur. It’s cheap, shiny and completely beer geeky: in essence, the perfect addition to the home bar with everything.

By the way, I’m totally serious about the necklace idea. Represent! [bass.com]

Fiscalini Farmstead Hopscotch Scotch Ale Cheddar
The funk smacks you upright the moment the plastic seal on this hefty pale chunk of cheese is broken. Luxuriate in another sniff, keeping the distraction of the label’s rendition of a bagpipe-playing cow sporting a kilt and dancing in a Scottish field to a minimum. (Note: It’s more difficult than it sounds.) What befalls is a mix of sour, sweet and stinky without an ounce of shame. It’s possibly the best smell—and as I’ll soon find out, taste—in the world.

With ingredients merely reading, “raw milk, salt, enzymes, cultures and beer,” this Modesto, Calif.-based, aged-for-more-than-60-days cheese screams “hand-crafted and artisan” from all directions. First off, there’s no funny stuff or preservatives in the making. The cheeses are produced in small batches and have won gold awards in various competitions. But even more importantly, their well-pampered cows have merited Fiscalini the honor of being the first to receive “cow comfort” certification by Validus (USDA-approved auditor) in their Animal Welfare Review. Cue happy moos.

In what seems to be the perfect marriage of two fantastically fermented foodstuffs—beer and cheese—Hopscotch Scotch Ale Cheddar proves to be an impressive snack. It has the classic texture of cheddar, yieldingly moist while breaking into firm shards, with a fine beer flavor that sings right through. The sweet caramel tinge of barley-heavy Scotch Ale is unmistakable. After snarfing through a bit of this, I began fantasizing about Hopscotch grilled cheese sandwiches (on sourdough for an extra hit of tang), a chunk of Hopscotch draped over a slice of warm apple pie and the pièce de résistance: macaroni and Hopscotch cheese. Pair it, naturally, with a solid Wee Heavy and skip your way into the heady Scottish sunset. [fiscalinicheese.com]

300 Beers to Try Before You Die! by Roger Protz
I can totally see many a beer advocate clutching this tome to their chest, the bright yellow cover rising and falling in tandem with their last dying breaths, muttering with a mix of ecstasy and regret about the brews they were lucky to experience in this life and those to be treasured, somehow, in whatever afterlife would befall them. And then, in that final moment, they’d realize that their lifelong quest for beer was rich, purposeful and full of joy. Darkness and exeunt.

Pardon the drama, but this book is serious. Not only does the exclamation mark in the title give a slight jolt of urgency, there’s no less than 304 satiny pages teeming with beery knowledge, courtesy of esteemed beer writer Roger “my last name is practically Prost!” Protz. If you’re in the mood to set yourself free on a wild beer hunt, get yourself a copy. Each of the featured beers gets its own full-page profile and a tiny area (it literally lies in the margins) to jot down tasting notes of appearance, aroma, taste, overall score and possibly additional doodles under the influence. Twenty-nine distinct chapters based on style, plus an intro on making and tasting beer, make for a nice roof over bottles from Rodenbach Grand Cru to Anchor Steam Beer, from Moor Old Freddy Walker to Aecht Schlenkerla Rauchbier.

Drink yourself to death, if you dare. [beer-pages.com] ■ 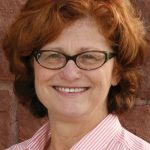 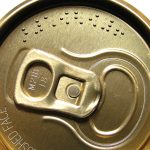