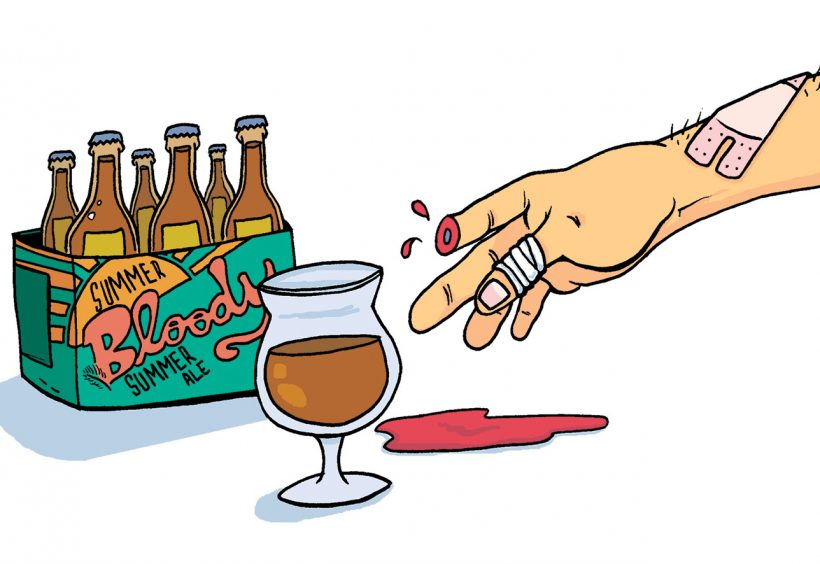 Amidst all the happy talk of our latest creations lurks danger, a dark side. From out of the shadows, mayhem can strike, turning a blithe, happy day into a calamitous mess. I’m not talking about the “damn, my beer is mucked up” sort of hazards. I’m talking “this would be a terrible way to die” kind of things. Sometimes, though, when you taste the final outcome, the price is worth paying.

My first bloody brew happened early in the hobby. Mick, a fellow Falcon, invited me to brew on his steam kettle all-grain setup. “Be at my place Saturday morning, and we’ll brew.” The first mistake we made was that “morning” bit. Mick, Army Ranger veteran, and I, slacker MIT computer programmer, define morning radically different. When I showed up at a still-early (to me) 9 a.m., Mick was standing with a pile of partially milled grain, holding his paper towel-swathed hand above his head.

Turns out, he got impatient waiting for his lazy, no-good, sleeping brew partner and went to mill the grain. With two oversized pulleys, a belt and a greasy-sounding motor, his mill must have been designed by an evil man. Part-way through the crushing, it jammed. With the motor still running, he proceeded to check the system by thrumming the drive belt. The drive pulley got a taste of Mick’s finger thanks to the belt’s sudden freedom.

Not wanting to waste a perfectly good brew day, Mick walked me through his system and the recipe. While I brewed a summer ale, he tended to the ribs, still holding bloody paper towels skyward. We joke that I managed to brew “single handedly.” And, despite the permanent reminder of the long-ago-consumed “Summer Bloody Summer” ale, Mick still maintains it was a fantastic beer.

My second bloody brew proves that fate has a wicked sense of humor. Celebrating the release of my book, I bought a gigantor 26-gallon pot. The behemoth doubles as my hot tub. Feeling suave, I planned to test drive a new American Oatmeal Stout recipe in the cauldron.

My “new,” funky, redwood garage-cum-brewhouse lends a nifty moonshining feel to the operation. Problematically, it comes with a misadjusted spring-tensioned door that needs to be propped open. Displaying my usual lack of grace or depth perception, I managed to bump the bracing pole while fiddling with the mash.

What followed was a sequence of *clang,* *creak* and then a bang (with dark red dancing spots) as my head intercepted a metal clip on the rapidly closing door. As I kneeled on the ground, clearing my head, Diane, another Falcon and brew-day helper, having arrived in time to hear the commotion, scrambled to my aid. Thanks to that heavy door, I spent the rest of the day with a gel pack smacked over a good bloody gash in the pan, but dammit, we finished brewing. (Needless to say, my fiancée was less than enthused by my latest attempt to cut short our courtship.)

I just tapped that “Bloody Head Stout” and, holding true to history, damned if that beer isn’t awesome. Another friend has declared it to be in the top three beers of mine he’s ever tasted. Whether it’s lighting your shorts on fire, snipping off a piece of finger or proving a thick Irish skull tougher than a garage door, danger abounds. And while I’m certainly not advocating a “blood addition,” the beer gods demand the occasional blood sacrifice, so take your lumps and enjoy the brew. 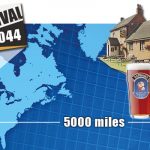 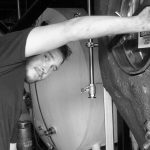