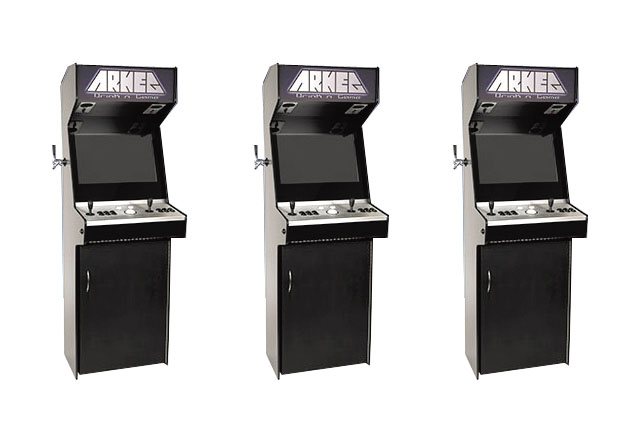 Question: If you could take a favorite childhood activity that you still love and combine it with your favorite adult activity—enjoying beer, of course—what would it look like?

Well, for many, it would be the Arkeg, an intoxicating blend of arcade game and kegerator. Yep, you read that right. Arkeg offers the fun and excitement of all your favorite arcade games in a stand-up model that multitasks as a tap system, keeping 5 gallons of tasty brew chilled and ready to serve whenever destroying Space Invaders works up a good thirst.

The Arkeg is the brainchild of two friends, Brant Myers and Dan Grimm, who have known each other since fourth grade, and no doubt spent much of their formative youth in Mortal Kombat at the neighborhood video arcade.

Fast forward to college, where a friend picked up an old Street Fighter II arcade cabinet for $20. They refurbished it, found a TV for a monitor and used an out-of-date computer to power the whole thing. The new pastime became the rudimentary prototype for the Arkeg, as these self-proclaimed “tinkerers and drinkers” instantly sought to make improvements on their new toy.

“The sheer bulk and mass of the arcade astounded me when I found that the enormous bottom half held less than a magazine-sized component,” Myers said. “This wasted space, combined with the juxtaposition of a jury-rigged refrigerator-kegerator [located] across from [the arcade game] led us to think about how we could combine the two large objects into one smaller, more efficient unit.”

Two “fun, yet frustrating” years went into creating Arkeg, Myers said. As they continued to research and work on their project, the duo created a relatively long list of “must-haves” for the system. On the gaming side, the Arkeg comes pre-loaded with 69 classic arcade games, customizable software and WiFi capability, allowing you to load countless more games, meticulously reproduced arcade-style hardware and even an external pause button that lets you stop the action to top off your beer glass.

“We live, sleep, eat and breathe beer and videogames, so ideas like a full-sized trackball or dual-stage regulator were givens,” Myers said. “The small touches that make the Arkeg world class are additions that don’t get seen much, but make the difference. We have the hidden dropdown keyboard so the gaming computer can do more than game. We added hidden USB ports so you can add steering wheels, three- to four-player controls or listen to music through your iPod. We knew, in this day, that cramming the largest possible LCD screen couldn’t hurt. Neither would having an internal subwoofer to make those punches actually feel like they’re moving through you.”

But the development was not all fun and games. The kegerator side of Arkeg proved to be the most challenging, according to Myers, who said that the technology they needed to develop a solid-state refrigeration unit barely existed in commercial form when they started designing the Arkeg in 2001.

“We needed to cool 5 gallons [of beer] off a computer power supply. No easy feat,” he said, adding that the equipment they turned to is used on small six-pack coolers that you run off your car. The payoff: no coolant, no moving parts, low-power consumption and it’s virtually silent. A good thing, since the Arkeg is designed and marketed for home use—there is no coin door, making those stacks of quarters a thing of the past.

Of course, the Arkeg itself will cost you a lot more than a night’s worth of quarters—about $4,000 for the base machine, with a number of customizable options available—but when you consider the fun factor, it might just be priceless. ■ 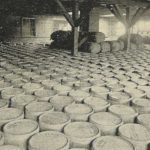 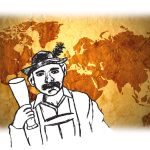 Next: The Taste of German Pils
Tags: Kegerator, Technology