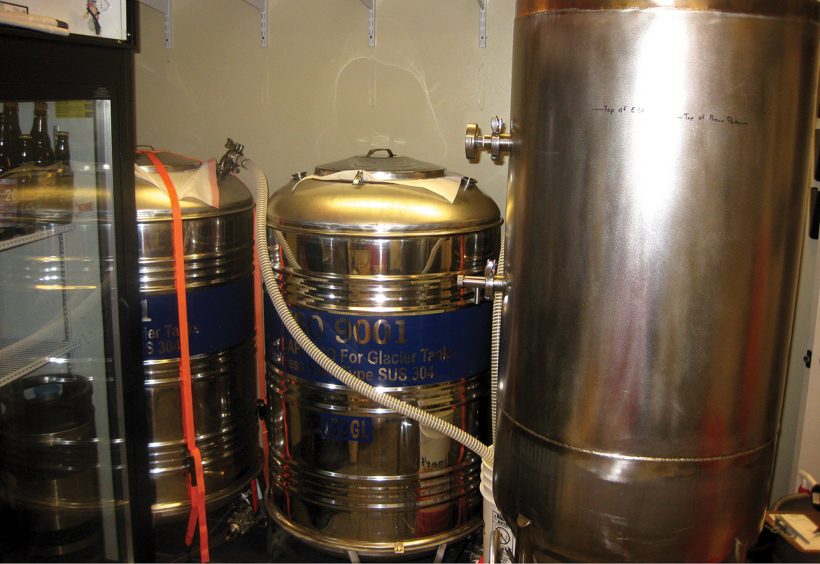 If you don’t know what to look for, you’re likely to drive right past the little beer haven deep in the heart of wine country. With the exception of a sandwich board next to the small parking lot, there’s little to promote Dunbar Brewing Company, which sits tucked into the corner of a small commercial building in Santa Margarita, on California’s central coast. At just under 500 square-feet, the brewery and accompanying taproom is a cozy spot to grab a pint when it reaches the maximum capacity of 25 people—and that’s just the way owner and brewmaster Chris Chambers likes it.

This One’s Just Right
Dunbar has undergone a variety of changes since its first incarnation in 1997, when Chambers opened the original brewery in nearby Los Osos. That location closed three years later, when he began service as an armorer and weapons trainer in the California Army National Guard as well as in the US Army. After his service, Chambers relocated to Santa Margarita and reopened the brewery again on May 15, 2009—albeit with no fanfare.

“I guess I’m a little more modest than that,” he says. “We do well, so there’s no point in putting up a billboard on 101 saying ‘Microbrewery, 1/4 of a mile, turn left.’ For me, it’s always been word of mouth. We’ve never done a lot of advertising. You found us.”

Five days a week, Chambers stands behind the bar pouring pints for regulars and the handful of visitors coming off the 101 freeway for a break. They are greeted by an impressive assortment of breweriana and the soulful voice of Johnny Cash (with no exceptions, Johnny Cash is played over the brewery’s sound system—it is a “Cash-only” bar, Chambers explains).

Most likely, visitors are greeted by familiar faces as well. “I grew up in this town, and I kind of got drug in [by some family friends],” says Lauren Galena, who was celebrating her 28th birthday at the brewery. “I know a lot of locals around here, and there’s good word of mouth.”

Galena says that she comes to Dunbar about three times a week, once after hitting the nearby farmers market on Thursdays, once after her family dinner on Sundays and often once more during the weekend. She adds, “There’s usually a different crowd for each night of the week. We’ve all got our nights.”

Chambers is proud to play an active part in the small community. Dunbar played a role in helping to build a local basketball court, and the brewery also does a handful of beer dinners in collaboration with local restaurant Bonnie’s Kitchen. “When I came into the industry in 1997, that’s how it was. Beer festivals were fundraisers for communities, and along the way, that got lost, and it became for your back pocket,” Chambers says. “I think now it’s going back to where it should be, where more of the things are going on … are more community-based. … There was definitely a time there where it was lost, and I’m glad to see it coming back.”

The brewhouse rests about a yard away from the bar behind a wrought-iron cage. It is a small 3-barrel system designed by Chambers and built by a local machine shop for the original Dunbar Brewing Company. The three-vessel brewhouse has a narrow, elevated walkway that allows for easy access to the kettles, but also serves as a makeshift stage when patrons, or Chambers, have had a couple beers and want to jam on the acoustic guitars hanging on the wall next to the kettle.

Tastes Like Beer
Chambers’ passion for beer began during a brew session with friends. But, like so many other brewers that started in the ’90s, it blossomed into a full-blown obsession the more he explored the hobby.

“I had some friends that were brewing and they said, ‘Hey, you should come over and brew beer,’” Chambers recalls. “It was basically heating up extract and calling it beer. I was like, ‘I don’t know what that was, but I don’t think it was beer.’ It was pre-internet, so I went out and bought a couple of books, started reading about it and started brewing. It’s always been my focus to perfect something instead of, like most homebrewers do, brew all sorts of different things and clone different beers. I started working on my own beers and continued to brew them and work on the recipes until I perfected them—and those are the beers on tap today.”

Chambers says he formulated recipes and made decisions on grain additions by chewing the grains to see what they tasted like. The result was often dozens of carboys filled with various brews scattered throughout the shady parts of his living room. The clutter eventually led to the initial opening of Dunbar Brewing Company, where Chambers’ creative efforts had a more practical outlet. After his time in the military, Chambers wanted to refocus his attention on the beer, and he wanted a brewery that reflected that.

“When we opened this place, we talked about one thing that we both wanted was no TVs,” says Chambers’ wife, Lauren. “We just wanted it to be kind of somewhere you can come and hang out, and it doesn’t matter who you are, you can find a common bond with everybody. I think that’s something that has really happened. Everybody that comes in just chats with everybody else and gets to connect with other people. That’s what it’s all about, good beer and good people.”

Simple and Traditional
Forget the fact that there’s no room for it, Chambers has no desire to start a barrel-aging program. He would rather focus his attention on crafting traditional and timeless British ales. To prove his point that good beer doesn’t have to be extreme, Chambers brewed a single-malt (Maris Otter) and single-hop (Challenger) beer dubbed “SMASH.”

“Everything last year was over-the-top barrel aged,” he says. “I wanted to strip it down and go the exact opposite. When you have one grain and one hop, you can’t hide anything. I wanted to show the industry that we know what we’re doing and make an amazing beer. My intention was to only brew it once, but [my customers] won’t let me stop making it.”

The beer stands alongside a lineup that focuses on Chambers’ five mainstay beers, although there are a handful of seasonals and special offerings. One such special offering, to be unveiled in May as Dunbar’s third anniversary beer, was still hidden away in carboys tucked alongside the wall of the brewery’s tiny fermentation room and makeshift cellar.

Chambers brews once a week and occasionally one of his regular taps will dry up before the next batch is ready, but that’s just the way it is at Dunbar. He may be unapologetic about his brewing schedule or the size of the bar, but he’s always welcoming to a familiar face or a stranger. After all, as Lauren Galena says, “It’s a family here. I know that’s funny to say about a bar, but it is. It’s a family.”

The Brewhouse
– 3-bbl system designed by brewmaster Chris Chambers
– Five 132-gallon water tanks that serve as fermentation vessels
– 1 100-gallon conical fermenter designed by Chambers and made locally; a prototype that Chambers plans to replace the original fermenters with

What’s on Tap
Brown Porter: A traditional London Porter with a deep brown color and hints of roasted chocolate – 5% ABV
English-style Ale: Served from a nitro tap, this straw-colored ale is somewhat similar to Boddingtons – 5.5% ABV
Irish Stout: A smooth, bold-tasting Stout that belies its modest ABV. Served on nitro – 4.75% ABV
Scottish Heavy: One of Dunbar’s most popular beers, brewed with smoked peat malt from Scotland – 6.8% ABV
IPA: Brewed with 70 IBUs’ worth of Cascade and Kent Goldings hops to give an American twist to this English IPA – 6.25% ABV

What He Said
“In the liquor industry, everyone was drinking gin and nobody drank Scotch. Now, everyone’s drinking whiskey, so it’s one of our most popular beers, whereas it used to be love it or hate it. It’s interesting to see how the tastes have changed over the years.” –Dunbar Brewing Company owner and brewmaster Chris Chambers on his Scottish Heavy ■ 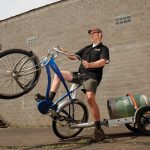 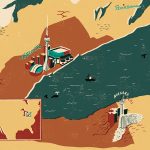