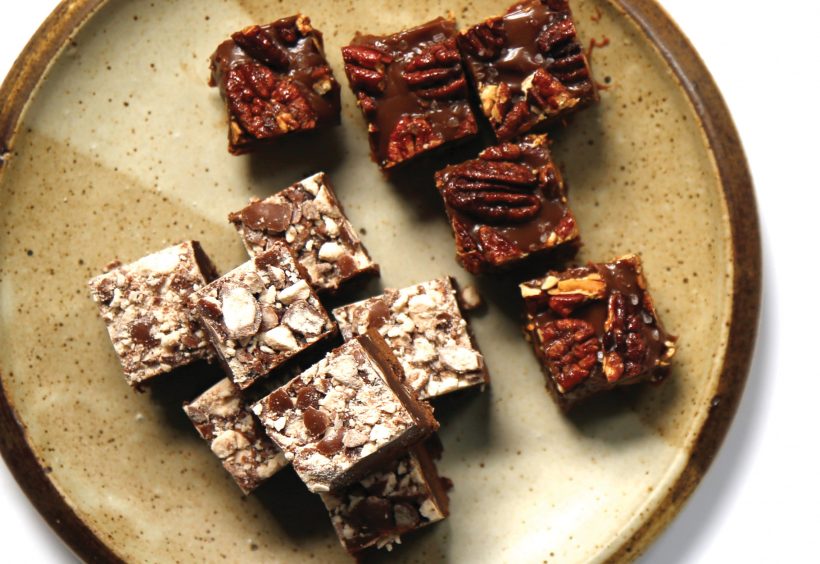 The winter holidays bring gatherings of friends and family, filled with toasts and feasts. My own family celebrates with many food traditions, including making and sharing a huge variety of cookies, cakes, toffees and fudge. They are perfect make-ahead recipes that travel easily, share well and can be quickly placed on a candy dish for impromptu gatherings. The following fudge recipes can also be packaged and given as gifts to friends, co-workers and loved ones. Happy holidays!

Malted Mocha Stout Fudge
Malt balls are coated in a thin sheet of chocolate, adding a protective layer and ultimately, flavor. When you think chocolate malt milk shakes, does a smile not creep across your face? The two go hand in hand. Chocolate and coffee go together too, combining to make mocha. When dissecting how Stout tastes, we should consider all the varieties: Dry Irish Stout, Milk Stout, Imperial Stout, Chocolate Stout or Coffee Stout. All of these flavors pair well together. This fudge recipe showcases the flavors of malt, chocolate, coffee and milk.

Directions:
Prepare a square, 8-by-8-inch baking dish by lining it with aluminum foil. Carefully press it into the corners, taking care to minimize any creases, so that the fudge will be smooth on the bottom.

In a medium sized pot, add the Imperial Coffee Stout and the vanilla bean. Place the pot over low heat and slowly reduce liquid to 4 ounces. This will intensify the beer flavor and reduce the amount of moisture. Pour the beer reduction into a liquid measuring cup to check the volume.

Once the beer has reduced, add in the liquid malt extract, sweetened condensed milk and espresso powder. Stir to dissolve all the ingredients and bring back to a simmer. Cook the candy mixture for about 5 minutes. Remove the vanilla bean.

If the mixture becomes grainy at any point, use an immersion (hand held) blender or pour it into the pitcher of a blender and purée until smooth.

The candy mixture should have the consistency of a thick pudding. Add the chopped chocolate (increasing its surface area) and stir, while removing the pan from the heat. Let the chocolate melt, stirring every minute until it is fully combined. Once all the chocolate is incorporated into the candy mixture, add about one-third of the crushed malt balls into the fudge, stirring to combine.

Next, scrape out all the fudge into the prepared pan. Level it out, making sure to press into the corners of the pan. Evenly distribute the finishing salt and remaining crushed malt balls over the surface of the fudge, lightly pressing the malt into the fudge with the back of a spatula. Refrigerate for at least an hour.

Remove the fudge from the pan, folding down the foil until flat. Divide it into six equal rows (in half, then each half into thirds and repeat on the other side) in one direction, then turn 90 degrees and cut into sixths again, making cubes.

In an airtight container the fudge will last for about two weeks.

Bourbon Spiced Pecan Beer Caramel Fudge
This recipe was inspired by the flavors found in a pecan pie. The nutty pecan is surrounded by a caramel syrup with hints of vanilla. Barley malt syrup is combined with reduced Brown Ale and dulce de leche or caramelized milk to replace the syrupy custard in the classic pie. Try this recipe during the holidays to create a bite-sized pie minus the crust.

Directions:
Preheat the oven to 350°F. Place the pecan halves on a sheet tray lined with a piece of parchment paper or a Silpat® silicon tray liner. Arrange the nuts so they are not touching. Toast for 15 minutes in the oven, or until a nutty aroma starts to permeate the kitchen.

In a bowl, add the powdered sugar, salt and cinnamon, whisking to combine. Add in the bourbon, mixing to create a paste. When the timer goes off, remove the nuts from the oven and add to the bowl, tossing to coat evenly in the spiced bourbon paste.

Arrange the pecans back onto the sheet tray in an even layer and toast for another 12 minutes, until they are candied. Remove from the oven and let cool. These nuts can also be made for a variety of dishes, including salads, mashed yams or other desserts.

Directions:
Prepare a square 8-by-8-inch baking dish by lining it with aluminum foil. Carefully press it into the corners, taking care to minimize any creases, so that the fudge will be smooth on the bottom. Grease the foil with a non-stick spray or a light coating of oil.

In a medium-sized pot, add the Brown Ale and vanilla bean. Place over medium heat and let beer reach a simmer. Slowly reduce the liquid until the volume is 4 ounces.

When the beer has reduced, remove the vanilla bean and add the barley malt syrup, dulce de leche and bourbon. Using a whisk or hand held immersion blender, blend all the ingredients together, over low heat, until they are combined into a silky smooth caramel sauce. The caramel should be kept at a low simmer to prevent burning.

Arrange the remaining pecans over the top, creating an even layer. Then sprinkle the surface with the finishing salt, distributing it evenly over the fudge. Refrigerate for at least an hour to allow the fudge to set and harden.

To serve, use the foil to lift the fudge from the pan. Remove the foil and place onto a cutting board. Using a warm knife (dipped into a pitcher of hot water, then dried with a kitchen towel), cut the fudge into six equal rows (in half, then each half into thirds and repeat on the other side) in one direction. Rotate 90 degrees and cut into six equal rows again, making cubes.

In an airtight container the fudge will last for about two weeks.

How to Make Dulce de Leche
If you cannot find canned dulce de leche, it’s easy to make. Buy a 14-ounce can of sweetened condensed milk and remove the paper label. Preheat the oven to 425°F and submerge the can in a pan filled with enough hot water to cover half the can. Place into the oven and let the milk proteins caramelize over the next 90 minutes. Remove the can and let cool. Once open, the condensed milk will be dark brown in color and have a wonderful caramel flavor. This is a traditional flavor in South America, used in many desserts, pastries, ice creams and even as a spread on toast. ■ 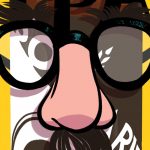 Previous: The Death of an Interestingly Potable Ale 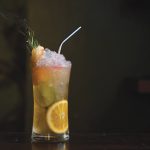