The Mid-Atlantic region is by far one of the richest beer scenes in the US. And by rich we mean upwards of seventy breweries, ninety brewpubs and literally hundreds of places serving good beer. We’re talking breweries that produce some of the most solid craft beers on the planet; brewpubs that have such a demand for their fine brews, many wind up adding on packaging lines or contracting out their beers just to meet demand; and beer bars that strive to only serve the best—not just the best beers, but the best-served beers, too. Traveling to this part of the country any time soon? Here’s a quick list of locations that are considered a must-visit by reviewers on BeerAdvocate.

Dogfish Head Craft Brewery has been stretching the bounds of what beer is, and what it can be, since its founding in 1995. Back then, Dogfish was Delaware’s first brewpub, and its brewers cooked up beer in 12-gallon batches, in kegs mounted on top of propane burners. Things didn’t stay small for long, though. Dogfish’s commitment to quality and penchant for experimentation quickly won it a rabid following. By 2002, Dogfish had expanded into a 100,000-square foot brewery and bottling plant.

Today, the original Rehoboth Beach brewpub remains. Its footprint has been greatly expanded, and it’s now home to Dogfish’s restaurant and spirits distillery (vodka, gin, rum and tequila are made upstairs). Rehoboth is also where Dogfish’s brewmasters have their fun. Their experimental brewery—which churns out small batches of unique, eclectic, limited release brews—is attached to the old brewpub. The stable of experimental beers on tap is ever-changing and never expected. Recent creations include Blood Orange Heffeweizen, Palo Santo Marron (a 12 percent alcohol by volume Brown Ale aged on blocks of Paraguayan wood—a technique common in South American winemaking, but unseen in American brewing) and 90 Minutes/30 Days (90 Minute Imperial IPA stuffed with more hops and aged in Pinot Noir barrels).

Dogfish’s main brewery and bottling plant is up the road, in Milton. Though nominally tamer than the stuff cooking up at Rehoboth, the craft brews coming from Milton are still built to shatter convention and taste buds. When there, must-taste beers include 60 Minute IPA (one of the country’s best); Indian Brown, a mashup of Scotch Ale, American Brown Ale and IPA; Midas Touch Golden Elixer, a honey-kissed beer-mead-wine hybrid; and 120 Minute IPA, a limited-release, utterly insane, 20 percent alcohol by volume, 120 IBU beer, which may well be the strongest IPA ever brewed. 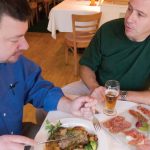 Previous: Quit Your Wining: How The Brewmaster’s Table Got Great Restaurants to Start Selling Great Beer 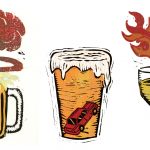