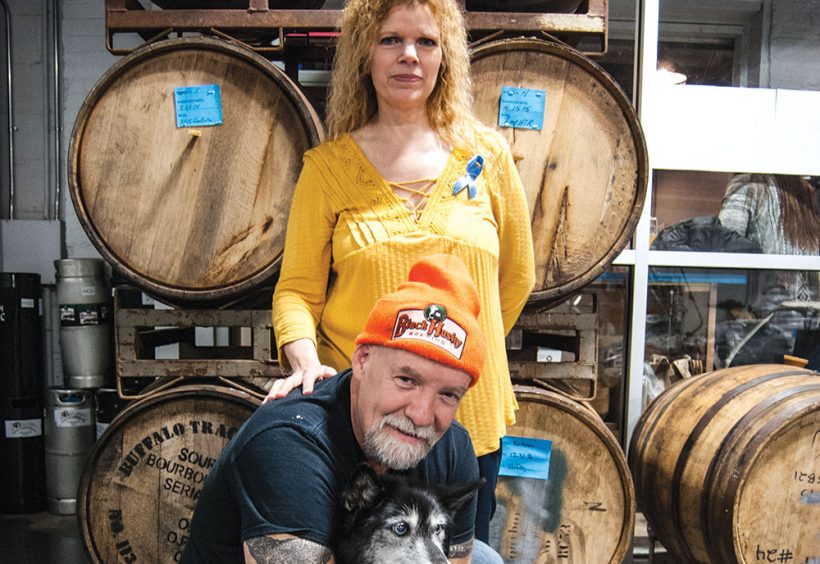 Tim and Toni Eichinger with their dog, Smokey.

Black Husky Brewing is an intensely personal venture for the brewery’s founders, Tim and Toni Eichinger. The husband-and-wife team launched Black Husky out of their rural Wisconsin cabin in 2010, with every beer a nod to a member of their former sled dog teams. The brewery has grown, and moved—a Milwaukee brewery and taproom opened in August 2016—but Black Husky’s beers remain deeply rooted in a brewing philosophy that Tim Eichinger established as a homebrewer. Big ales with full flavors, they’re often heavy on the hops, because that’s how Tim and Toni like to drink them. “We’re honest with ourselves, loyal to each other, and we brew good products,” Tim Eichinger says. “People don’t have to like everything I do, and if they don’t, there are always other beers they can try. I could make something less [forward], but I wouldn’t feel like I was being honest with people. […] I have to brew something Toni and I believe in, because if we don’t believe in it, we can’t ask you to drink it.”

1. Catch a fresh one
Tim Eichinger first discovered good beer when he and Toni were living in a log cabin in northern Wisconsin, surrounded by trees, sled dogs, and not much else. “It was about getting away, and figuring out who you are,” Eichinger recalls. Back then, he mostly drank Old Style—until he came across a six-pack of Bell’s Two Hearted. “It completely changed how I felt about beer,” Eichinger says. “I’d had hoppy beers in the past, but nothing with that type of aroma, the flavors, the malt profile. It completely took away the bitterness that was in IPA up to that point.”

2. Go crazy
Eichinger began homebrewing to save money on beer and to supplement the slim selection of brands available around him. It quickly became an all-consuming hobby. “I went crazy,” he says. “I’d brew five times a day sometimes. The volume of beer I was making was pretty prolific—it was way over the limits the feds set. I was obsessed with establishing my own style, and my own identity as a brewer.” And because Eichinger was homebrewing at such a heavy volume, it didn’t take much of a push to establish Black Husky Brewing as a nanobrewery.

3. Believe in work
Asked how much of a leap of faith it took him and Toni to strike out on their own, Eichinger replies, “Confidence is not something I lack.” He adds, quickly, “It’s not hubris. I have a lot of confidence because Toni and I have both worked incredibly hard; we obsess about things. We’re both very hard on ourselves, and we’re honest about whether our beer is good or not. We’ve taken it one variable at a time. So we were confident in the product, because we’d spent so much time looking at every angle, working methodically, having a process.”

4. Don’t be shy
Black Husky beers are anything but shy, regularly clocking in between 7 and 10 percent ABV. “As a brewer, I don’t want people to have to work too hard to figure out what’s going on: If it’s a malty beer, it’s a malty beer, and if it’s hoppy, it’s hoppy!” With this approach, Eichinger feels he gets fuller, more effective flavor profiles. So when he’s making an intensely hoppy beer, he needs a big malt backbone to play against; and when he’s brewing a Milk Stout, he turns it up to 8 percent and hammers home the kind of rich, creamy sweetness the style’s name implies.

5. Get a reaction
Sproose, Black Husky’s brawling Double IPA, showcases Eichinger’s affinity for big beers and decisive ingredient choices. At 8 percent ABV and over 100 IBU, Sproose highlights the interplay between the grapefruit flavors of Simcoe hops and the piney notes of fresh spruce tips, while the spruce and malt come together to create ginger notes. Sproose provokes strong reactions; it isn’t a beer for everybody, and Eichinger’s OK with that. It’s enough that he likes to drink it, and enough customers agree to make it Black Husky’s top-selling brand.

6. Be a boss
From Black Husky’s beginnings in rural Marinette County, Wisc., in 2010, until its move to Milwaukee’s Riverwest neighborhood last year, the brewery was a two-person operation. A new taproom has swelled the ranks a bit, but financially, Black Husky is still just Tim and Toni, and the brewery rises or falls on their sweat. With no outside investors, the company grows on its own cash flow—exactly how the Eichingers want it. “We’ve been approached by a lot of people, but if we’re going to do this, we’re going to do it our way,” Tim Eichinger says. “If we’re going to work this goddamn hard, we’re not going to have someone else have influence over what we do.”

7. Maintain your own pace
Tim Eichinger describes Black Husky’s move to open a Milwaukee production facility and taproom last year as a natural step in the brewery’s growth. In Wisconsin, most of their distribution accounts were in Milwaukee; moving south cut out some brutal self-distribution runs, and put them closer to family. But even after upgrading from a 300-barrel-per-year system to a much larger brewhouse with an annual capacity of 2,000 barrels, Eichinger isn’t in any hurry to grow quickly. “I like being able to do all the brewing,” he says. “We’re not trying to rule the world. Obviously we have to cover the bills, but we are not motivated by money. […] Growth has to translate to something meaningful.”

8. Stay on track
Black Husky excels at bold, hop-forward beers like its flagship Pale Ale with Simcoe hops, and variations that showcase Citra and Mosaic flavors. Not one to follow trends, Eichinger designs recipes that resonate with him personally. Black Husky won’t be releasing any session IPAs or New England juice-bombs, because it wouldn’t feel authentic. “It comes back to brewing what we believe in, and what we think we’re good at doing,” Eichinger says. “It’s really easy to get distracted in our business. I need to concentrate on stuff I want to do, because I have a big list of things I want to do. […] So I don’t want to get off track, just because there’s this new [trend] out there.”

9. Keep it old school
The Eichingers have imbued Black Husky with an old-school, DIY ethos. A throwback extreme IPA currently in the works is bigger than usual on caramel malts and heavy on Magnum, Centennial, and Simcoe hops. The approach also permeates brewing operations: Black Husky hand-fills and hand-labels 22-ounce bottles, self-distributes its beers, and the brewer and the keg washer are the same guy. “I never said we were smart—I said we’re hard-working,” Eichinger jokes. “The only way I could convince Toni to do this was [by doing it] our way, without compromise.” ■ 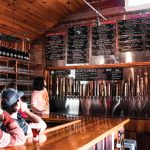 Previous: The Barrel, a Charleston Bar for Dog and Beer Lovers 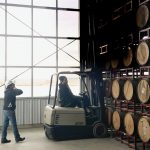