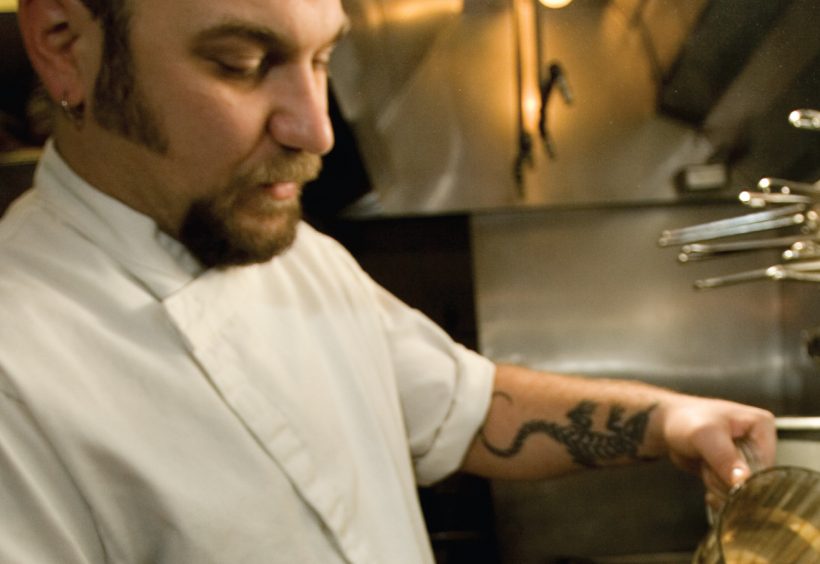 In a chilly, unfinished room abutting Boston’s beloved Publick House, owner David Ciccolo is showing me photos of the swank Celli taps he’s selected for the new bar. After about a month more of major rackets and minor details, the Monk’s Cell (as it shall be known) will open its doors and provide the adjacent restaurant with muchneeded relief from the crush of its ever-swelling clientele. And while packing a bar in Boston might seem as simple as unlocking the doors, the throngs who stuff the pews and salvaged church chairs at the House are there for something a bit more advanced than typical pub grub. After three years under the watchful eyes of Chef Jim Sklaver, the Publick House has made itself into the city’s finest spot for artisanal brews and cuisine à la bière alike—and Bostonians are eating it up.

“I finally found someone who would listen to me,” says Ciccolo, recounting the difficulties he had finding chefs who shared his enthusiasm for cooking with beer. “I don’t understand why more people don’t do it, given the fact that beer pairs with food so much better than wine does. Of course, no one will ever, ever, ever accept that.”

“The idea when I started was to work beer into as much of the food as possible,” Sklaver tells me; and a glance at the menu is a testament to the enthusiasm he brought to the challenge. Beer turns up everywhere: in sauces (one cream sauce mingles Brooklyn Pilsner with apricots), in condiments and dressings (like a mustard complemented with Wostyntje) and as a marinade (Andouille sausages carry the sturdy tang of Arrogant Bastard Ale). He’s even incorporated hearty Maredsous 10 into a Bolognese sauce.

“I just kind of felt like trying it,” Sklaver says when pressed on the reasoning behind that last one. “Everything on the menu has gone through a lot of trial and error—and it doesn’t always work. I tried an Arrogant Bastard osso bucco that was … well, it was really bad. You have to be careful.”

One inherent hazard of beer in the kitchen is its tendency to veer towards bitterness once it hits heat. Choosing the right beer for reductions is crucial, according to Sklaver, who recommends curious novices start their excursions into reduction by using beers with fruity characteristics (like Lambics) or high sugar content (like most Belgians). Sklaver also champions beer as a powerful source of flavor and color for cream sauces—like the lusciously surly mushroom sauce that gives his veal dish the distinct punch of McChouffe—and warns against excessively hoppy beers as marinades.

Elsewhere, and on a more traditionally Belgian note, he uses a variety of beers as bases for a selection of ample mussel pots: Smoky Schlenkerla Rauchbier downright italicizes the impact of savory bits of slab bacon and sweet, toasted corn; Allagash White strikes a deliciously simple balance with garlic and thyme; and Affligem Abbey Blond imparts a robust finish to mussels buried in tomato, spinach, Asiago cheese and crisp panko crumbs.

The sheer variety of ways Sklaver sneaks beer into his cuisine, the variety of flavors he’s able to pull from them and the adventurous “let’s try this” spirit behind his approach is enough to steel even the most nervous home chef into a bit of experimentation. Just remember to save a bit in the bottle for yourself as you go along.

“We have a lot of fun back there, and apparently we’re doing something right,” Sklaver says. “I couldn’t be happier.”

Heat 3 tbs. oil in large, heavy skillet over medium-high heat. Brown the meat on all sides, about 5 minutes. Transfer to a large pot, using slotted spoon.

Reduce heat to medium-low. Add more oil to skillet, if necessary. Add onions and cook until translucent, about 10 minutes.

Stir in tomatoes, beer and tomato paste. Bring to a boil then reduce heat.

Rinse and drain beans and add to pot, cover and simmer until meat is very tender, stirring occasionally, about 3 hours. Uncover during last hour if necessary to thicken liquid into sauce. Serve in a small bowl with a warning label. ■ 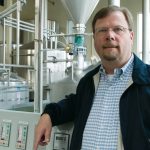 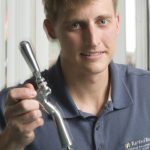