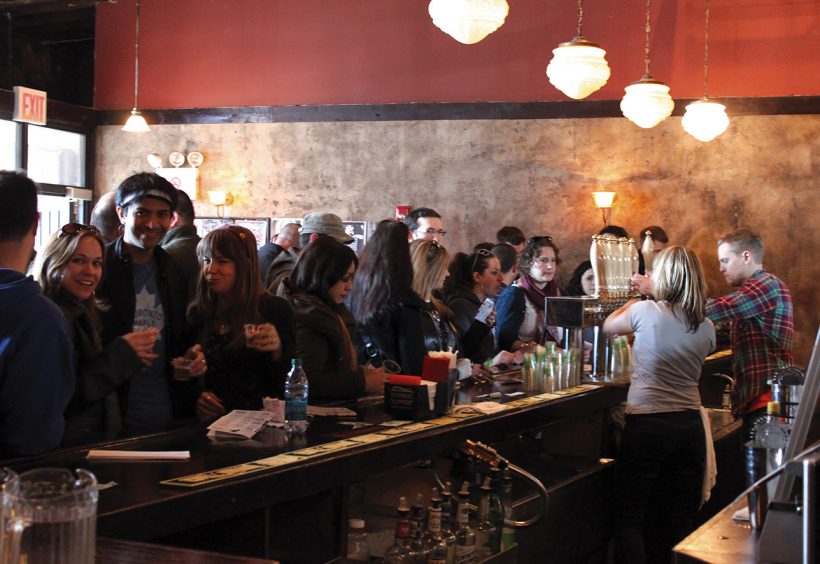 Attendees line up for samples at Beer for Beasts in New York City.

Neo-Prohibitionist organizations and media campaigns have created an image of the beer drinker that is less than friendly. To add fuel to the “beer is bad” campaign, popular television ads air during football games that seem to support the frat party “more is more” attitude, which often leads to binge drinking and bad decisions.

As a result, the general public has in its collective mind an image of the beer drinker as an overweight slob in ripped jeans and a stained shirt, downing a case of lager before the fourth quarter. It has led to the misconception that wine is the more civilized drink, and provides fine restaurants with an easy excuse to defend a lack of better beer on their menus.

The reality is that brewers and breweries have long done much more to benefit society than harm it. In ages when drinking water was often contaminated, brewing was a practical science that provided townspeople with something to drink that wouldn’t kill them. Centuries later, brewers are still working hard to make a positive impact on their communities.

Community Outreach
Big Sky Brewing in Missoula, Mont., is one-third of an unusual partnership. The brewery, famous for its Moose Drool Brown Ale, recently teamed up with a local church to brew All Souls Ale—the profits of which go toward the charity foundation Imagine Missoula.

At first, this seems like a bizarre collaboration—a church brewing beer? A brewery working for charity? But Big Sky’s head brewer, Matt Long, explains. “I think it’s up to businesses like ours to take some responsibility and try to help people out,” Long says. “I don’t think there’s really any other reason for us to do it. If everybody chipped in just a little bit like we do, things would be a lot better. … It’s just something we like to do.”

Long adds that the responsibility of supporting the local community shouldn’t fall solely on the shoulders of the closest brewery—it’s the obligation of everybody who can afford to help.

Imagine Missoula supports individuals who need a little assistance, by, say, installing a water pump for a woman with no running water, or finding volunteers for single parents who need help moving. And the quite liberal approach of Missoula’s All Souls Church to the concept of drinking (“While alcohol may be part of the problem,” says its website, “we think it can also be part of the solution”) makes the church the perfect complement to the brewery/charity dynamic.

Big Sky is also involved in community projects that are a little more beery in nature. “Every year, we do something called the ‘Community Brew,’” Long says. “We work with the local homebrew club, The Zoo City Zymurgists, and we determine a style of beer, and then the homebrew club brews it, and we have a judged contest. “We pick the winning beer and the winning brewer gets to come to the brewery, and we make a big batch of it. Half of the proceeds go to the homebrew club, and the other half go to a local nonprofit.”

This year’s winning beer was a Coconut Chocolate Imperial Porter, affectionately dubbed “Missoula Five-0” (a riff on Hawaii Five-0), and half of the profits provided aid for AniMeals, a local food bank for dogs and cats. In years past, the brewery has donated to a children’s shelter, urban-gardening initiative and a state food bank. And all the while, the area homebrewers are able to fund field trips for their organization, and buy ingredients and equipment to improve their beers.

For Those Who Can’t Speak Up
As times have changed, so too have the types of individuals needing assistance. While poverty and hunger are still scourges of both the developed and undeveloped worlds, more charities are channeling their attention and fundraising efforts toward those who cannot defend or speak for themselves.

In the case of Beer for Beasts—a joint charity project between New York’s Sixpoint Brewery and BeerAdvocate—proceeds from a one-of-a-kind brew festival that took place in March helped provide much-needed help for the Humane Society of New York City.

“We feel that they’re just one of the most underrated and well-meaning organizations in New York City,” says Cathy Erway, Sixpoint’s communications and outreach coordinator. “They have been doing good things for so many years for people, for our community, for pet owners, but with very little fanfare. We all love our pets here. We looked at a lot of different animal charities, and we felt that they’re having such a big impact with the amount of pets they help at this one facility. We really felt very strongly that this is an organization that deserves celebration.”

In order to raise funds, BeerAdvocate founders Todd and Jason Alström, as well as BA’s director of events, Candice Alström, pooled their experience organizing festivals, and the folks at Sixpoint worked overtime for weeks, brewing 20 one-off beers just for the sell-out event.

“We started out by wanting to collaborate with BeerAdvocate on an event in New York City,” Erway explains. “From there, we didn’t really want to make a killing off of this. We didn’t want to make a profit, we wanted to have fun with BeerAdvocate and have fun with the other people who have been collaborating on brews with us, and everybody else who buys tickets to have good time. The other main thing was we wanted to do it for the sake of sharing it with the community.

“It’s funny because in all the years that [the Humane Society] has been operating, they said that nobody has ever come up to them and said, ‘Can we throw a big fundraiser for you?’ It’s always been them trying seek businesses to try and donate money to them.”

Beer for Friends
Brit Antrim is a good friend to many brewers across the country—especially those in Southern California and Colorado. Through years of work in the industry (he’s been head brewer at Anderson Valley Brewing Company and director of brewery operations for Great Divide, among other positions), he developed tight relationships with brewers who came to realize that Antrim would give them the shirt off his back if they needed it.

When Antrim was severely injured in a workplace incident that left him paralyzed from the chest down and unable to work, his friends sprang to action to help him and his family.

The result was an effort from a long list of breweries, including the Pizza Port chain, Anderson Valley, Great Divide, Ballast Point, Avery, Cambridge Brewing Company, Maui Brewing Company and Hollister Brewing Company, which all came together in February under the impetus of Pizza Port’s director of brewing operations, Jeff Bagby, to create beer that their friend would like, and donated as much of the profits as they could to his family to cover the exorbitant cost of medical care and other necessities. To make this economically possible, Roy Farms donated hundreds of pounds of hops, and the Brewers Supply Group helped with discounted grain.

“Brewers stick by each other,” Hollister’s head brewer, Eric Rose, says. “None of us have a serious support network. I don’t think I know more than a handful of brewers who have any type of 401(k) or any sort of retirement program. Pretty much everyone I know spends what they make, and they don’t make a lot. It’s nice to know that there’s a strong group of friends behind you who can come through when you need them.”

Some of Antrim’s compatriots were unable to brew a new beer for the fundraiser, but did what they could to help out. Adam Avery, of Avery Brewing, donated all of the proceeds—$16,000—from the annual Boulder Strong Ale Festival, and Vinnie Cilurzo, of Russian River, donated kegs of Pliny the Elder for events in Antrim’s adopted hometowns of San Diego and Boulder. But those who were able to brew—such as Rose, Bagby and Cambridge Brewing Company’s Will Meyers—did.

The profits from these beers weren’t huge, but they all went directly to Antrim and his wife. And they may not have provided the same immediate morale boost as a party at Falling Rock in his honor, but they did create something real—and of real value. “We could have donated a check or donated a percentage of a night, but it seems like since he’s a brewer, it would better represent him than just a night that was in his name,” Rose says. “It’s more in the spirit of the brewer.

“I guess it was more tangible to the people who had it. It was like they had something and [thought] about what it was going toward, rather than just a general night that went toward a school’s water polo team or something. They actually had a pint of beer and thought about what that two dollars was going toward. I think that’s hopefully how people felt about it.”

These tribute beers and events helped raise close to $100,000 for Antrim’s family, and have allowed him to focus on his physical therapy. As of print deadline, he was reportedly able to grip a pint of beer, and is working on getting it to his lips on his own. He is able to imbibe and enjoy as well.

These brewers put their craft to good use in order to help a close friend—somebody who would have undoubtedly done the same for them—but are just a small sample of what brewers and breweries across the country are doing to make a positive impact in their communities. Perhaps one day, they will be recognized on a large scale for their charity work. Until then, the best we can do is raise a glass in recognition—and order another pint of beer brewed for charity. ■ 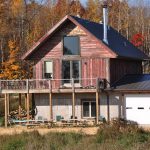 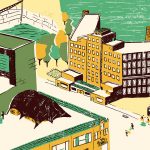