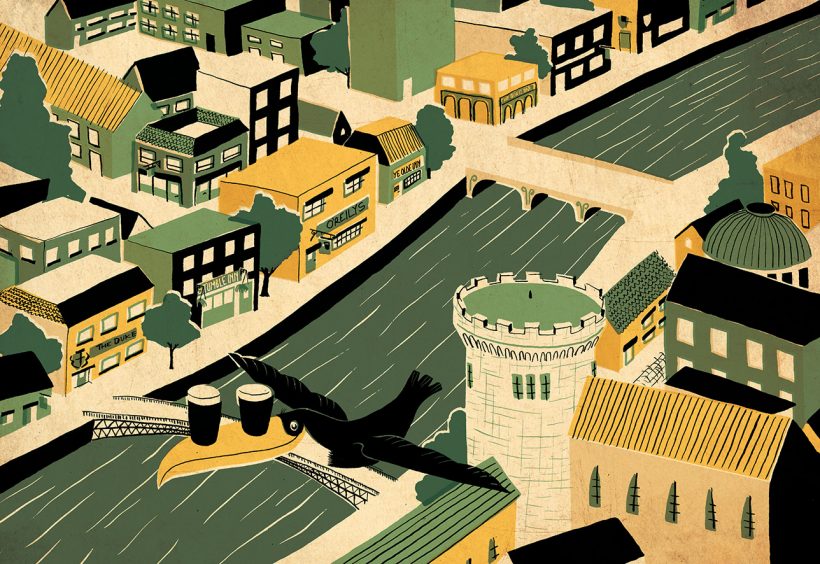 At the time of Guinness’ founding in 1759, Dublin boasted dozens of breweries; but, as far as we know, by 1949, the Stout brewers at St. James’ Gate were the only brewers in town.

In the past few decades (but especially the past few years), the Emerald Isle’s beer lovers have witnessed remarkable growth in craft beer production. Independent producers on the island have popped up with the aim of maintaining an art that’s always been a part of Irish identity. As Bull & Castle manager Geoff Carty puts it: “The Irish put their own sweat and tears in their own beers.”

Tapping into the craft beer movement in the US and the newly flourishing independent brewery scene in the UK, distributors and publicans in Ireland have been able to survive without relying on the European Big Three (InBev, Heineken and Diageo). Being able to serve beer from the cask is of paramount importance to these brewers, and many of these new establishments offer multiple cask-pulled beers.

In a city known for its pubs, the pub names tend to speak louder than the beer on tap. (Some visitors come out feeling like Harry Lemon on a Stag’s Head at the Old Stand in the Long Hall of the Temple Bar … all names of pubs in Dublin.) But scratch the surface, and you’ll discover a burgeoning beer culture centered around independent Irish breweries like White Gypsy, Donegal and Hooker. Most of these places look like any other pub from the outside, and the majority are located beyond the well-trodden, touristy Temple Bar area.

As most of the brewers’ output is too small to be exported (partly due to Ireland having the second-highest tax on beer in the European Union), tasting the new craft beer movement requires a trip to the Emerald Isle—as if you needed another good reason to visit Ireland.

Galway Bay Brewing Co. Pubs
Against the Grain
One of the trio of Dublin pubs owned by the Galway Bay Brewing Co., this is a refined retreat on often-rowdy Wexford Street. Take this chance to sample brews from Irish microbrewery Eight Degrees (try their Knockmeal Down Porter, for one). In addition to over 50 bottled craft brews from around the world, their menu includes Moroccan lamb shank tangine and Irish prime sirloin steak.

The Black Sheep
Down an unsuspecting north-side street, this classy gastropub belonging to Galway Bay Brewing Co. feels like a study (in a good way). Its savvy bartenders will gladly let you sample from the four rotating casks. With 23 English, Scottish, American and international craft brews on tap, and over 100 in the bottle, you might need help choosing one. Ask if they have any brews in stock from Kinnegar Brewing, which is likely Ireland’s tiniest brewery.

Brew Dock
Located across from the Connolly train station, the youngest sibling of the Galway Bay Brewing Co. is a great place to greet Dublin (or bid it farewell). Its coffered ceiling and columns are elegant features, a great space to enjoy the wide beer selection of some 70 bottled varieties. Like The Black Sheep, it also has four beers pumped from the cask. Its platters for two and fisherman’s pie are classic.

Bull & Castle
Launched in 2006, this Bavarian-style gastropub across from Christ Church offers an impressive selection of Irish beers from craft brewers like Whitewater, Inishmacsaint and Dingle, to name a few—but see if they have any from Beoir Chorca Dhuibhne, one of Ireland’s smallest breweries. Try a tasting tray of four or eight, which includes their featured cask offering.

The Cobblestone
77 North King Street
cobblestonepub.ie
If music is what you seek, look no further than this friendly pub in the Smithfield area, north of the River Liffey. Preferred by musicians themselves, The Cobblestone is likely the most authentic pub to hear a daily “trad session.” On Saturday afternoon, you might even hear Appalachian music. As an added treat, the owners have a cask reserved for Dungarvan brews, in addition to Galway Hooker, Celis White and Kopparberg cider.

Dice Bar
93-94 Benburb Street
thatsitdublin.com
This is not your average pub. In a space where there’s been a bar since 1790, owner Kieran Finnerty constructed this hipster haunt a few minutes’ walk from the Jameson distillery. Under the label Big Hand Brewery, Finnerty has a mechanic and an accountant concoct the tasty Sparta Lager and Revolution Red Ale, which are available only here. With DJ’s spinning soul, rock and funk music late into the night, you can make this your last stop.

L. Mulligan Grocer
You’ll likely pick your jaw off the floor before taking a sip of one of over 100 varieties in nine categories, from lagers to Lambics. You’ll want to eat here as well. The menu recommends a beer and whiskey to pair with each dish. Irish beers include Porterhouse Oyster Stout, Trouble Brewing, Franciscan Well’s Friar Weiss and a guest brew from one of their two rotating casks.

Messrs Maguire [closed]
This quayside establishment is the self-proclaimed “only gastropub with craft brewery”[sic] in Dublin, and one of the two major brewers in Dublin outside St. James’ Gate. Beers here include the Rusty Red Ale, a bock and the Haus Lager, with seasonal brews to sample as well. Messrs’ brewer, Cuilan Loughnane, is also the founder of White Gypsy, a groundbreaking but small brewery in County Tipperary. Meals here are a must, with tempting treats like mussels marinated in house beers and an Irish ribeye steak.

O’Neill’s
It’s big and on the tourist trail, but give it a chance. It impresses with a respectable selection of international and Irish brews, including Eight Degrees, Galway Hooker, College Green, Carlow and Trouble Brewing. A good chance to try Tom Crean’s from Dingle Brewing Co., and a few beers from Scotland’s BrewDog. The cafeteria-style food is affordable and does the trick. Be sure to look for the “snug,” a part of the bar that was historically sectioned off for ladies in Victorian times.

The Palace Bar
21 Fleet Street
thepalacebardublin.com
The Palace is the gentleman’s pub of Dublin—refined but not pretentious. Come here after 5 any day of the week and soak up the after-work scene amid original Victorian décor. There’s always a cask pouring a smooth pint of Dungarvan from County Waterford in southeast Ireland. This former literary haunt also boasts its own brand of Irish whiskey.

Porterhouse Brewing Co.
Dublin’s other major craft brewer, the Porterhouse Brewing Co., has two depots in central Dublin and one across the Atlantic in Manhattan. Originally tapped in 1989 in the nearby coastal town of Bray, the Porterhouse can truthfully claim they brew a better Stout than their big, famous rival. In fact, the brewers from St. James’ Gate might be spotted in here, checking out the tastes of the future. Three Stouts, three lagers, four ales and a seasonal fill the original beer menu.

WJ Kavanagh’s
At this younger sister pub of L. Mulligan Grocer, the beer jocks boast their five casks and stellar array of craft beer. With a special penchant for lesser-known English brewers, they also employ the British cask system, which yields real ales that are otherwise hard to find outside England. Their changing menu items include sumptuous dishes like Suki Earl Grey tea house-smoked salmon, with a recommended brew from Metalman Brewing in County Waterford. ■ 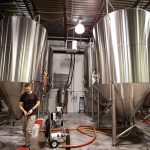 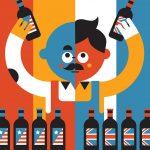