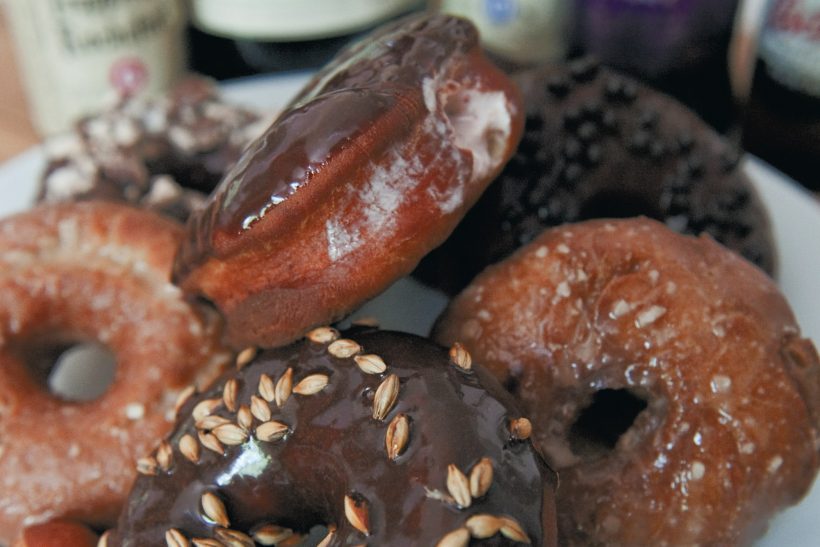 “Donuts. Is there anything they can’t do?” questions Homer Simpson. I might question the same thing about beer, Homer’s other love. A man after my own heart. Hmmmm… why not combine the two to make the ultimate BEER DONUT!

Could this creation be the perfect hangover breakfast? Push aside the Bloody Mary and start the day off with a beer-infused donut that will satisfy any weekend craving for a fried piece of goodness.

Black & Tan Donut
We all know the drink, but have we experienced the donut? This raised-donut recipe can also become a base for filled donuts and other creations.

Donut Directions:
In a pint glass, mix the water, yeast and DME or sugar together to make a wort. Let still as the yeast starts to wake up. In the bowl of an electric mixer, add the Pale Ale, sugar, milk powder, salt, egg and shortening. Add the proofed yeast and mix to combine. Add 3-3/4 cups of flour and mix on low speed till the dough starts to come together. Add flour as needed. The final dough should slightly pull away from the sides of the bowl and still be a little sticky. Let mix for 2 minutes on medium.

Transfer the dough to a lightly greased bowl that is about three times the size of the dough ball. Cover with plastic wrap and let sit for 1 1/2 hours to rise. This can also be done a day in advance and placed into a refrigerator. Remove from the fridge 30 minutes before using to warm up.

Punch down the dough and let rise for another 30 minutes. On a lightly floured board, pour the dough out and roll out to a thickness of half an inch. Using a wide-mouth beer goblet, dip the rim in flour and cut rounds out of the dough, making each round as close to the next as possible. Then, using a shot glass, cut a hole in the center of each round. Remove the donuts to a sheet tray and let rise for another 30–45 minutes.

Preheat a large Dutch oven half full with vegetable oil to 360°F. Have a cooling rack placed over a paper towel or a paper bag ready. Place the donut into the hot oil and fry on each side for 2–3 minutes. Remove from the oil and drain. Then dip into the Chocolate Stout Glaze and then into a bowl of crushed malt balls. Enjoy.

Donut Glaze Directions:
In a pie plate, add the beer, cocoa powdered sugar, and salt, mixing well to combine. Keep the glaze slightly warmer than room temperature to prevent the glaze from hardening.

Belgian Oliebollen
Many street fairs and markets in Belgium will have these fried donuts available. One of the few fried pastries in Belgium, these Oliebollen are a true treat.

Directions:
In a large bowl, lightly mix together the flour, water and beer. In a separate small bowl, add the milk, sugar and yeast. Mix together and let sit for 5 minutes. The yeast will foam up if it is active. If this does not happen, start over with fresh yeast.

As the yeast is proofing, separate the egg yolks (into the flour/beer bowl) and the whites (into an electric mixer). Starting on low speed, slowly whisk the whites for 1 minute. Then increase the speed to high over another minute. Slowly add the sugar and salt to the whites as they beat to a stiff peak. Now add the yeast slurry to the flour mixture and fold in the beaten egg whites until combined. Cover the bowl with a towel and let sit at room temperature for 30 minutes, allowing the dough to rise.

To cook, preheat the oil in a large pan, half full, to 350°F. Dip a large soup spoon in water (to prevent sticking), then into the batter, making a small mound, and then carefully drop into the hot oil. Add about 6–8 spoonfuls of batter at a time. Cook for about 3–4 minutes, then turn the balls over to cook and brown evenly. Cook another 3–4 minutes and remove from the oil, letting drain for a few moments, then place on a cooling rack set over a paper bag or paper towels. Let cool slightly and then dust with powdered sugar. Serve immediately.

Variations: To make an apple beignet, add 2–3 spoons of batter to a small metal tart pan. Smooth out to a small disc, just larger than the diameter of an apple. Cut an apple in half, core it and then place it on the dough. Add 2–3 spoonfuls of dough on top of the apple and seal the apple by moving the batter with the back of the spoon to encase it completely, rotating the pan as needed. Carefully drop the whole pan and batter into the oil and let cook for 4–5 minutes. The pan will drop off, then flip the apple beignet to cook the other side for another 4–5 minutes. Remove from the oil, drain and dust with powdered sugar.

Directions:
In the bowl of an electric mixer, using a paddle attachment, add the butter and sugar; beat on high speed until the butter is light and fluffy, about 3 minutes. Stop and scrape down the sides a few times. Add eggs, one at a time, until fully combined. Then add the crème fraîche or sour cream, then beer, vanilla and salt; mix to combine. Add the cake flour and baking powder; mix on low just until the batter is formed. Remove the paddle, cover the bowl and refrigerate the batter for at least 2 hours or overnight.

On a lightly floured surface, roll out the donut batter to 1/3 of an inch thick. Use a large cookie cutter, donut cutter or Rochefort goblet to cut the donut shape. Use a shot glass to make a center hole. Add the donut to a 365°F pot of oil and fry for 2–3 minutes on each side until golden brown. Drain on a cooling rack over paper towels/bags.

For the glaze, in a small bowl, mix together the orange zest, cinnamon, sugar and milk until there are no lumps. Set aside for dipping donuts. Dip the hot donut into the glaze and enjoy.

Variations: To make the Brothers Donut, add 3 tablespoons cocoa powder to the flour, and substitute the Rochefort for a Kate the Great Russian Imperial Stout from Portsmouth Brewery. For the glaze, substitute the milk for more Kate the Great. Or, replace the beer with Wells Banana Bread Beer, and dip the donut into a creamy peanut butter for the perfect banana & peanut butter sandwich.

This custard is not only a great filling for a donut, but it can also be a standalone dessert.

Directions:
In a large bowl, mix cornstarch, sea salt and sugar with a whisk and place on top of a pot of boiling water. Slowly stir in cream, milk and beer, mixing till combined; stir occasionally until mixture is thick and smooth, about 12–15 minutes total. Remove from the heat and stir in vanilla. Let custard come to room temperature, then cover and refrigerate until ready to use. Can be made 2–3 days in advance. ■ 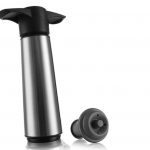 Previous: Saving Your Beer for Another Day 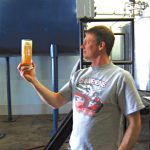