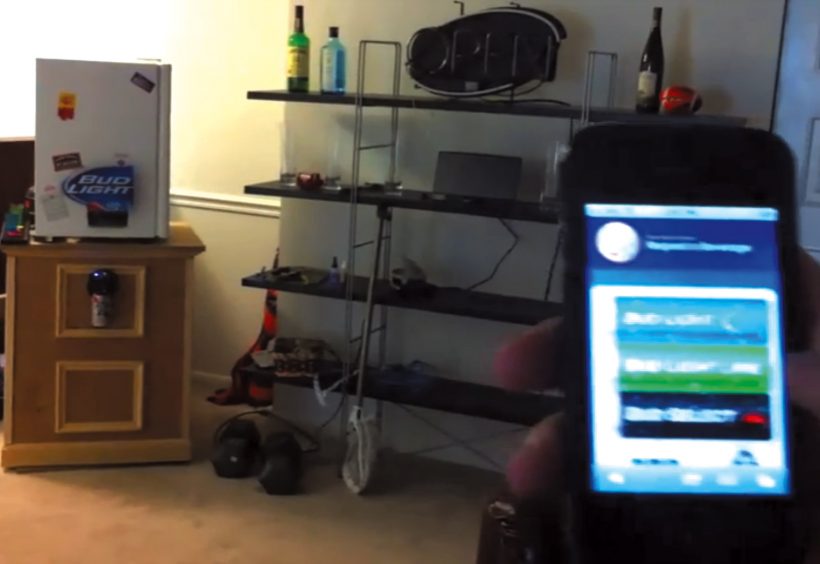 Those with smartphones have likely noticed several beer-themed apps, but Ryan Rusnak has invented one of the most practical yet: a remote-controlled “beer cannon” made from a converted mini-fridge.

Rusnak tells BA that the idea came to him thanks to a budding interest in micro controllers, and an old mini-fridge. He explains, “I wanted to see if I could control real-life objects from a smartphone. I happened to have my old college mini-fridge lying around and thought, why not build a phone-controlled vending machine?”

Rusnak then enlisted the help of his friends to fine tune the delivery method. “Somehow we arrived at the conclusion that an air cannon would just be awesome, and we started building. We built a few prototypes and probably went through a whole case of beer before we found the happy medium between a slow roller and smashing the beer on the ceiling. The cannon is pretty small and only uses about 45-50 pounds per square inch, which is less than half of a bike tire.”

The completed machine utilizes a webcam and a Lazy Susan, displaying the webcam image via the remote control app on the phone to help aim. After a brew is launched, it automatically posts a video to Twitter.

Rusnak concludes, “People always ask me how often I use the fridge. I use it every day! After the daily grind, firing a cannon from a smartphone while getting a beer in the process is just what the doctor ordered.” Sierra Nevada Named “Green Business of the Year” by EPA

According to the EPA’s press release, Sierra Nevada was recognized because they have “consistently implemented sustainability policies and projects that reduced the company’s environmental footprint across all of its operations.”

The EPA notes the brewery implemented a zero-waste policy (which diverts 99.5 percent of its solid waste from landfills), reduced its water consumption thanks to a water recycling program, and is working with suppliers and partners to reduce the impact of their products. They are also the largest buyer of organic hops in the country, and have established a “Farm with Your Brewer” program to encourage small hops farmers to adopt sustainable farming practices.

Sierra Nevada was one of 12 individuals and organizations named in this year’s ceremony, all of which have demonstrated ways to greatly sustain and improve the quality of our natural environment. Other honorees included Gov. Arnold Schwarzenegger, for implementing a number of air-quality solutions, and the city of Hermosa Beach, Calif., for using low-impact development techniques in a recent coastline improvement project.

As reported in BA last month, A-B InBev had sued Major League Baseball over allegedly reneging on a multi-year sponsorship contract. On December 27, A-B announced that an agreement had been reached by both parties and the lawsuit against MLB had officially been dropped.

On December 30, Mark Wright, A-B’s vice president of media, sports and entertainment marketing, stated, “Major League Baseball has always been a top priority for our Budweiser brand and is important to our plans. We value our long-term relationship with the league and are happy to have resolved this issue.”

No financial details were disclosed, but this deal coupled with their six-year sponsorship of the NFL (starting with the 2011 season) means one thing is certain: Sports fans will be seeing even more Budweiser ads, year-round. Here we go. At 6:30 p.m. on December 29, a fire broke out at Belgium’s Abbaye de Notre-Dame de Saint-Rémy. The abbey—which is famous for the Trappistes Rochefort series of Belgian ales—suffered some serious structural damage, but there were no reported injuries. Key areas, including the monks’ brewing tanks and 700-year-old library, were spared from the flames, thanks to the efforts of over 70 firefighters from Rochefort and its neighboring communities.

It is believed the fire was started by a generator, which had been in use due to power outages caused by recent snowfall. The Rochefort monks were just sitting down for dinner when they noticed the fire from the kitchen. Everybody inside was safely evacuated, and firefighters showed up minutes later. Within an hour, the fire had been contained.

The brewery employs 35 laypeople, and 19 Trappist monks reside within the Abbey grounds. Despite the damages, the brewery’s production is only expected to be halted for a week. However, cleanup and reconstruction of the charred area of the building will undoubtedly take a while longer. ■ 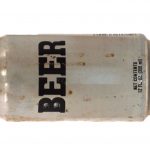 Previous: The Return of Generic Beer. Sort of. 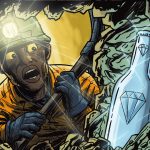