Chocolate and beer offer the best of both worlds. Honest. 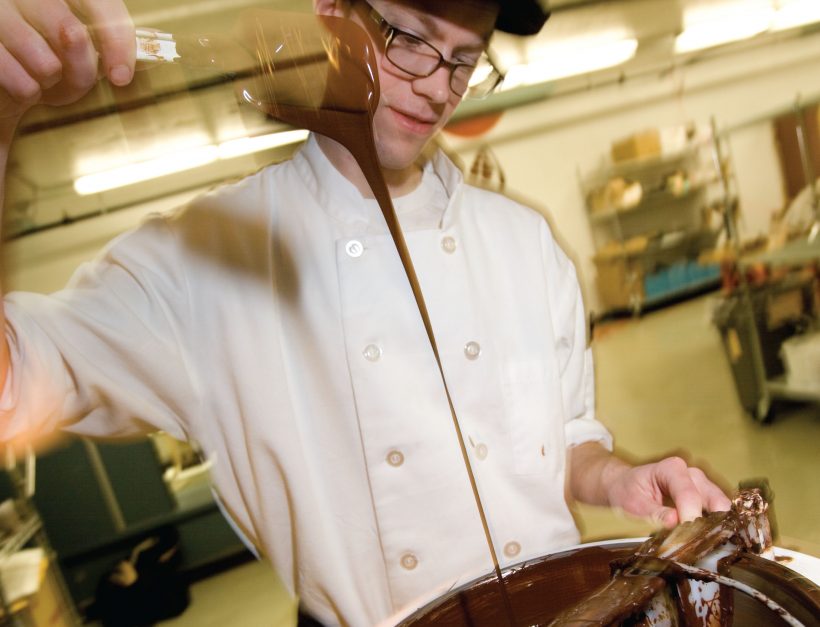 Used to be, a piece of chocolate was just a piece of chocolate, and if you wanted something to wash it down, you grabbed some milk. These days, chocolate lovers face a staggering selection of adventurous artisanal chocolates— and when it comes to pairing, the possibilities are endless. Certainly the appeal of wine and chocolate pairings has experienced something of a recent boom (at least in the US); but more and more, chocolate lovers and the chocolatiers who make them melt are discovering the unique compatibility between chocolate and—get this—beer. It may sound gross at first, but hang on for a second.

“There’s such a huge range of flavors in beers, so it actually makes sense with chocolate,” says Daphne Scholz, one of the owners of Brooklyn’s Bierkraft—a beloved purveyor of beer, cheese, chocolate and charcuterie specialties. One of the store’s best-selling items from the chocolate case are the works of Eric Girerd, a French chocolatier and pastry chef who began making custom chocolates for Bierkraft—each incorporating very different styles of beer. “You have chocolates made with Champagne, others made with cognac, so it’s very logical to see beer being used.”

“It’s very hard to do at first,” Girerd tells me (between batches) from his L’Atelier du Chocolat in Jersey City. “Every beer is different and will have a different reaction in the recipe.” The bases of these chocolates (which retail for $1.50 each) vary depending on Girerd’s mood, but he reliably uses six beers in his sampling for Bierkraft. One dark chocolate rings with the raspberry notes of Abita Purple Haze; one balances its bitterness against the rich sweetness of Horn Dog Barley Wine; Scholz especially enjoys Girerd’s chocolate with Ramstein Winter Wheat, and says that a Rogue Mocha Stout chocolate “speaks for itself.”

The chummy relationship between dark beers and dark chocolates is well known, but difficult to master. Chocolatier Brendan Gannon of La Tène in Somerville, MA, spent three years figuring out how to perfect his Guinness chocolates.

“I’m an Irishman myself, so Guinness is a staple,” Gannon says. “The biggest issue is that Guinness is actually quite mild-flavored if you consider that, on a chemical basis, a pint of it is largely water. When you’re pairing it with something, it’s simple to complement its flavor—but in a recipe, you need something more concentrated.” Gannon’s technique thus involves reducing the Stout down—a time-intensive process, as one pint yields only an ounce of concentrate. The small batches of the resultant treats, however, are surprisingly alive with the familiar flavor of Guinness, and are well worth hunting down. “It’s a labor of love, for sure,” says Gannon.

Inspired by the chocolates of Girerd and Gannon, Boston chocolatier Caroline Yeh began hosting classes on pairing beer with chocolate at her Temper Chocolates boutique in Boston.

“With wine pairings, sweeter wines go with sweeter chocolates; so generally, we’d be doing milk chocolates and dessert wines,” Yeh tells me. “But with the beer pairings, what was interesting is that we leaned towards darker chocolates that would enhance the bitterness of the beer. It was a very different direction.”

In these pairings, the beer typically provides the brighter flavors that the chocolates then serve to enhance—a reversal of the dynamic usually sought in wine pairings. Yeh paired Ommegang’s Three Philosophers, a dark blend of Belgian-style Ale and Lindemans Kriek (a cherry Lambic), with dark chocolates that incorporated ingredients from chilis to espresso to chicory—even a peanut butter and jelly bar. “The exotic chocolates worked very well with really flavorful beers. People loved them.”

If it still sounds scary, we’ve included a few suggested pairings from Yeh; but for the wary, Scholz’s approach might be the soundest way to explore this uncharted, often delicious territory.

“Start with the flavors you like, and wiggle your way back from there.” 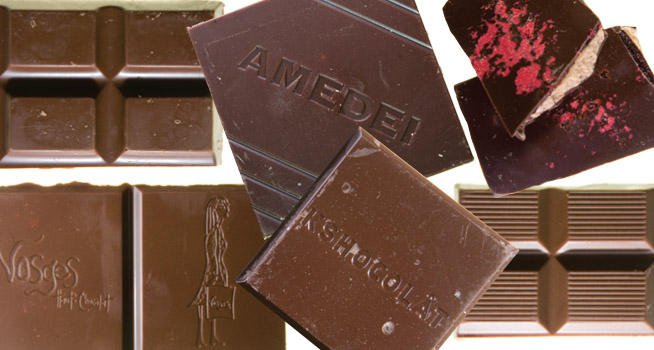 Kshocolat Dark Chocolate (with orange and cardamom), with Foret 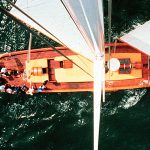 Previous: Bling Advocate: How Being a Shameless Spendthrift Can Enhance Your Enjoyment of Better Beer 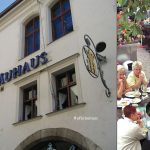