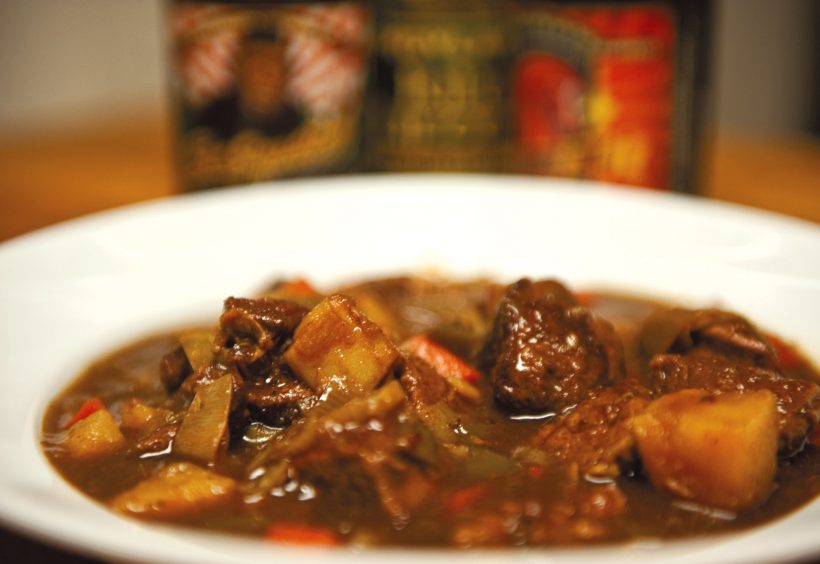 Irish Stout Stew
Not just for St. Patrick’s Day, this classic Irish stew can be made for any occasion. Rich and meaty, it will warm the soul on any cold or wet spring day. Note that the finished dish will have less bitterness if you wait to add the Stout until the last 35- to 45-minute cooking period.

Directions:
Trim any fat or sinuous tissue (if there is any) from the meat. In a small bowl, mix together the flour, salt and pepper. Heat a large Dutch oven over medium heat, adding the oil once the pan is hot. Lightly coat each piece of meat in the flour mixture and add to the Dutch oven, forming a single layer of meat. Using tongs, turn the cubes as each side browns, until all the surfaces of the meat are evenly golden brown. Transfer the browned meat to a bowl and repeat with any remaining meat.

Once all the meat has been browned, add the onions, thyme and bay leaves to the pan, sautéing until the onions are lightly caramelized, about 10 minutes. Deglaze the pot with the stock, scraping off any of the brown bits (fond) from the bottom of the Dutch oven. Add the meat back to the pan, stirring to combine. Once the pot comes to a boil, reduce the heat to low and let gently simmer for 1 1/2 hours. Stir the pot periodically. The liquid will begin to thicken as the flour combines with the stock, making a thicker stew. Once the meat is tender, add the remaining ingredients, stirring to combine, and cook for another 35–45 minutes. Check the seasoning, and adjust salt and pepper if needed. Once the vegetables are tender and the meat has that melt-in-your-mouth consistency, the stew is done.

Serve in a large bowl, garnishing with parsley. This dish will also benefit from making it the day before serving. Chill it and reheat the next day, letting the flavors meld and intensify.

Chicken and Leek Stew
This chicken and leek pie recipe has been transformed into a rustic stew—hearty, comforting and wonderful on a cold night.

* Cut a whole chicken into eight pieces (two thighs, two legs, two breasts and two wings). By cooking the meat on the bone, the stew will have more chicken flavor. Alternatively, boneless and skinless chicken can be used.

Directions:
In a large Dutch oven over medium heat, add the butter and let melt as the pan heats. Once melted, add the onions and cook for 4 minutes, stirring frequently. Once the onions are almost transparent, add the leeks and garlic. Season lightly with salt and cook for 6 minutes, until the leeks have wilted. Add the carrots, thyme and bay leaves, and cook for another 2 minutes. Now, add the stock, cream and beer, mixing well. Then add the cut-up chicken*. Bring the pot to a simmer and reduce heat to low. Let the chicken poach in the liquid for 35–40 minutes, until it is fully cooked.

As the chicken is cooking, start making a roux. In a small saucepan over medium heat, add 3 tablespoons of butter. Once melted, add the flour and whisk together, forming a paste. Continue to cook until the roux is a dark golden-brown color, about 5–6 minutes. Remove from heat.

Once the chicken is cooked, remove the pieces and set onto a plate to cool slightly. Take a tablespoon of the roux at a time and whisk into the cooking liquid, thickening the soup into a stew consistency. With each addition, let the liquid come to a boil for a minute, checking the thickness. Keep adding until it is the desired thickness. Turn heat to low. Take a knife and cut the chicken meat from the bones. Once removed, chop the meat into small 1-by-1 cubes. Add the meat back into the stew, mixing to fully combine. Taste and adjust the seasoning.

To serve, ladle into bowls and garnish with fresh thyme leaves.

Variations: This stew can be made into individual pot pies by following the above instructions, then cooling the stew. Add the stew to a small bowl and top with pie crust rounds that are the same size as the serving vessel. Lightly brush with an egg wash (one egg beaten with a touch of milk) and bake at 350°F for 30 minutes or until the pastry is golden brown and the stew is bubbling.

A Scottish Ale or Wee Heavy can be substituted for the Irish Red for a different flavor combo. 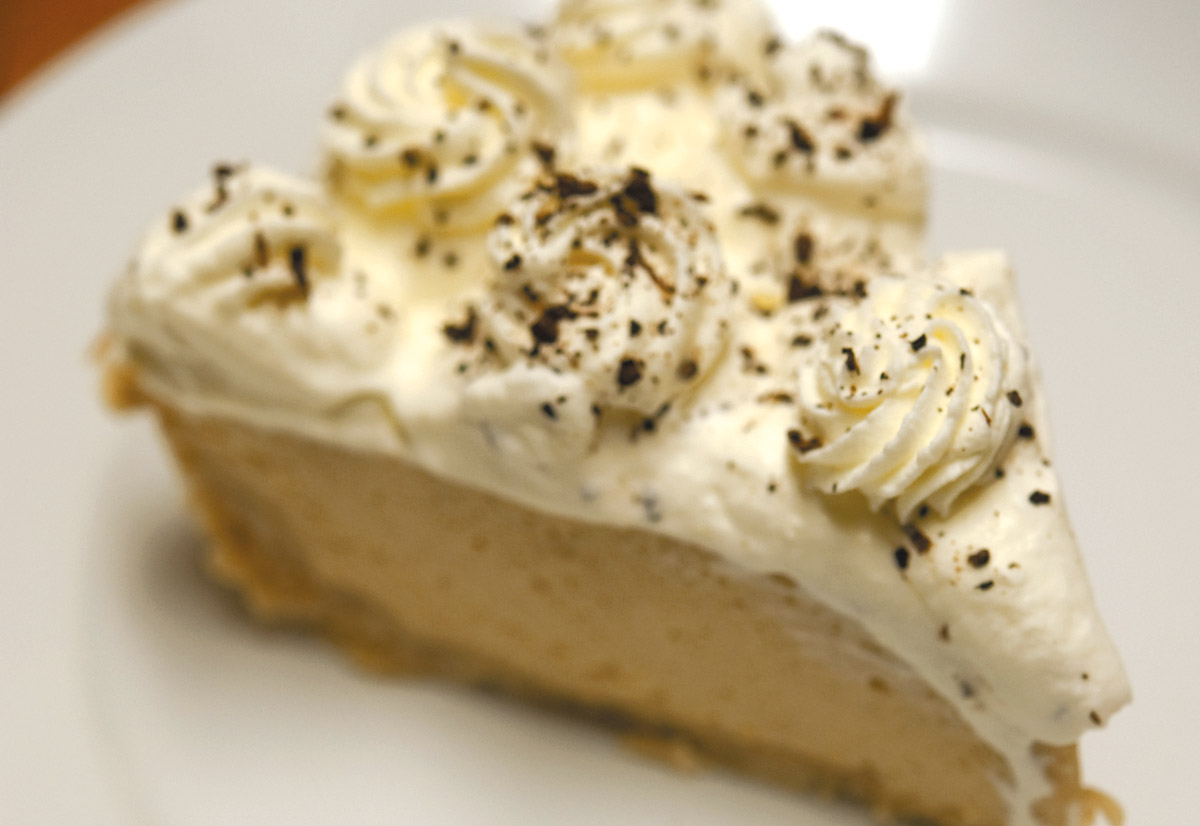 Irish Car Bomb Pie
My mother-in-law makes a wonderful Irish Cream Pie. The more I thought about this pie, I thought about the beer cocktail of Guinness, Irish whiskey and Bailey’s Irish Cream, otherwise known as a Car Bomb. So, I decided to run with the concept, and take the classic cocktail and make it into a pie.

*Note: Adding whiskey to the pie crust results in less water in the dough, making a forgiving pastry that is flaky and packs an extra punch of flavor for the filling to stand up to.

Pie Crust Directions:
In the bowl of a food processor, add the flours, DME and salt. Pulse several times to mix the ingredients together. Add the cold butter and shortening to the bowl, and pulse a few times to cut the fat into the flour. Keep pulsing until the mixture has small grain-sized chunks of fat evenly distributed throughout. Transfer the mixture to a medium-sized bowl. Add the whiskey and ice water. Using a spatula, fold the liquid into the flour/fat, until the mixture forms a ball. Since the alcohol mixed with flour cannot form gluten like water and flour can, over-mixing isn’t as much of an issue with this crust. Plus, the alcohol will evaporate (40-percent alcohol), resulting in a flaky crust. Form the dough into two equal-sized balls. Take plastic wrap and wrap each ball of dough, pressing down on each to create a disk. Place in the refrigerator for at least 30 minutes to rechill the fat, preventing the crust from shrinking as it cooks.

Preheat the oven to 400°F. Take one dough ball and roll it out to 1/4 of an inch-thick round, on a lightly floured surface. If you don’t have a rolling pin, use a 22-ounce bottle. Roll the finished disk onto the rolling pin. Unroll it in a 9-inch pie plate or tin. Fix any cracks with any extra dough. Crimp the edges of the crust and lightly poke the bottom with a fork (to prevent steam pockets), then place into the center of the oven and bake for 12–15 minutes or until golden brown. Let cool before adding filling. This recipe only needs one dough ball. The other can be frozen or saved for another use, e.g., topping for pot pies.

Stout Filling Directions:
In a medium-sized saucepan, add the gelatin, sugar, DME (if using) and mix to combine. Place the pan over low heat and add 1/2 cup of the cream and Stout. Stir until the gelatin has dissolved. In a medium bowl, whisk the egg yolks until pale and fluffy. Add 1 tablespoon of the cream mixture and whisk into the yolks. Repeat this step several times to temper the yolks, preventing them from scrambling. Add the tempered yolks to the cream mixture. Continue to stir, until the mixture thickens (reaching about 180°F). Remove from the heat and place the pan in a bowl of ice water to chill down to 90°F, just before the gelatin sets. Add the Irish Cream and 1 tablespoon of whiskey to the mixture, and stir well.

In another bowl, beat the egg whites until they reach a soft peak. In a third bowl, beat 1 cup of cream until a soft whipping cream is reached. Fold the Stout mixture into the beaten egg whites, loosening up the filling. Add the whipping cream and fold into the Stout mixture, making a Stout mousse. Pour the mousse filling into the baked pie shell and cover with plastic wrap (preventing a film from forming) and chill in the refrigerator for at least 2 hours.

To serve, remove the pie from the refrigerator and take off the plastic wrap. Whip the remaining 1 1/2 cups of cream with 1 tablespoon of whiskey and powdered sugar into a soft peak. Decorate the top of the Stout mousse with the whipping cream, garnishing with malt dust. Cut into pieces and serve.

Appetizer or starter for an Irish meal
Although Ireland is not known for a wide range of beer styles, the beers that are produced go very well with cheese. The Ireland cheese scene is blooming. Upon a recent trip to my local cheese shop, I found some wonderful cheeses, including some made with beer. Cahill Farms has a cheddar that is marbled with Porter, and Kerry Gold (creator of Dubliner) has a version of Dubliner made with an Irish Stout. The Dubliner, with its sharp to sweet flavor, similar to cheddar but more nutty, pairs well with the roast and soft nitrogen head of a Dry Stout.

There are many different cheddars, such as Kilaree, aged up to 15 months, creating a full-bodied cheese—rich with a slightly creamy texture. And there are some beautiful blues, like Cashel Blue. This blue cheese is more similar to a Gorgonzola than an English Stilton, having a creamy, almost buttery flavor, supporting the tangy astringency that the penicillin blue veins bring into the cheese. These flavors work well with a Stout or the caramel malty flavors of a Red Ale, touched by a hint of chocolate and a light bitter finish. Ask your cheesemonger to help set up a unique cheese plate. Add some local honey, dried fruits and maybe some toasted nuts to compliment the flavors in the cheeses, adding more complexity to the palate for your guests. ■ 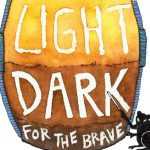 Previous: Bottom of the Barrel 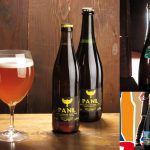