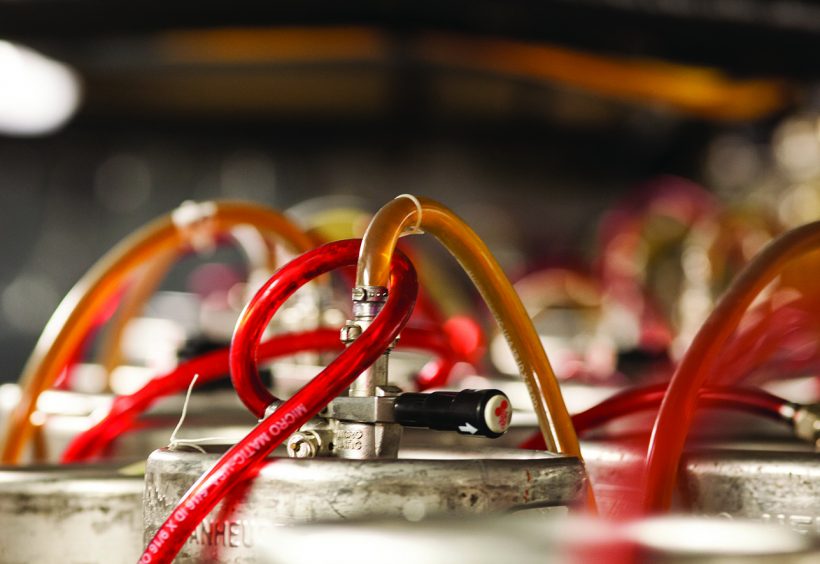 Ordering a beer used to be a pretty simple endeavor; you’d choose from a relatively straightforward list of five to 10 beers, and a few minutes later, a pint glass landed in front of you. But that’s hardly the story anymore. Taphouses with 20 lines or more are becoming the new standard—and what goes on behind the scenes is anything but simple.

Credit goes partly to beer drinkers, who are constantly in search of creative and experimental beer; meanwhile, not only are there more breweries for publicans to work with, but many of them are focusing on meeting the local draft demand rather than bottling or canning. So now more than ever, beer bars are expanding their tap lists to accommodate this ever-increasing appetite for the new and different.

When it comes to managing all those taps though, “the whole picture is important,” says Kevin Bolin, who founded and co-owns The Mayor of Old Town in Fort Collins, Colo., with his wife, Barb. Bolin’s built-from-scratch draft system has 100 taps (30 permanent, 70 rotating).

Bolin, a self-described tech geek, installed an iDraught flow-measurement system, which puts flow meters into every individual line; the meters monitor the cooler temperature, the line temperatures, the pour yield and the cleaning status. This information is regularly pushed to an off-site server, which then notifies management via text message of any irregularities. “Being resistant to change was kind of the norm in the industry,” says Bolin of his research of beer bars prior to The Mayor’s July 2011 opening. “We figured the only way to come at it counterintuitively was to use technology.”

When a new keg is tapped and the beer is enabled in the restaurant’s point-of-sale (POS) system, both the restaurant’s website and smartphone apps are automatically updated, a tweet is sent, an electronic menu displayed on a 19-by-4.5-foot high-def screen above the bar is refreshed, and paper copies of the new list (which also lives online) are printed twice a day.

The 36-by-9-foot basement cooler can hold 166 half-barrels on custom-welded, double-stacked racks. Using glycol and the traditional combination of CO2 and nitrogen run through a blend box, beer travels no more than 10 feet from the cooler to the taps, organized from light to dark, behind the bar overhead. The benefit of the shorter lines? “We wash the lines between every keg, and the resulting loss of beer in the process is a little under a pint of beer for each keg,” Bolin explains.

Kegs are also labeled by date, and bar manager Michelle Peth ensures that no beer stays on for more than 30 days. “In the rare event that we get close, she will reduce the price on the beer in the POS and it will in turn automatically be updated on the next round of printed bar menus,” says Bolin.

Building a custom system is no small task (Bolin’s cost $80,000)—but it’s becoming a regular request. Paul Olson is a veteran draft tech who operates his own business, called Keg Whisperer, in Golden, Colo. Olson has completed more than a couple dozen custom-built, complex systems for places like Backcountry Pizza (50 taps) and Reuben’s Burger Bistro (42 taps), both in Boulder, Colo.

Olson—who started as a draft tech 12 years ago for Left Hand’s now-defunct Indian Peaks Distribution Company—insists on building all stainless-steel systems. “Brass contains copper, which is insanely bad for beer,” he says. “A lot of beers like the sour and Belgian styles are highly acidic, and they’ll just eat the copper off the brass in a week.”

In addition to all stainless steel, Olson champions shorter tap lines and beer pumps, which are especially important where longer tap lines and/or large serving tanks are involved. (Beer pumps use mechanical pressure to pump the beer without using additional gases, which could over-carbonate and taint the beer.) But he is quick to add that there are many types of so-called “perfect systems”—it just depends on what you’re working with. “There is only one perfect pour solution for each situation, and there are almost always compromises made in a large draft system that even a beer geek could not detect in his/her glass,” Olson says.

Olson has also crafted a breakthrough method of using glass-lined barrier tubing as a choker line—the softer vinyl that is usually used tends to wear out after a couple of years, and is difficult to replace, as it’s often buried in the floor, ceiling or wall. “I just meticulously and very carefully heat the end and stretch it over a hose barb,” Olson explains. “It’s a technique that took a lot of hit and miss. Now I’m 100 percent with it.” 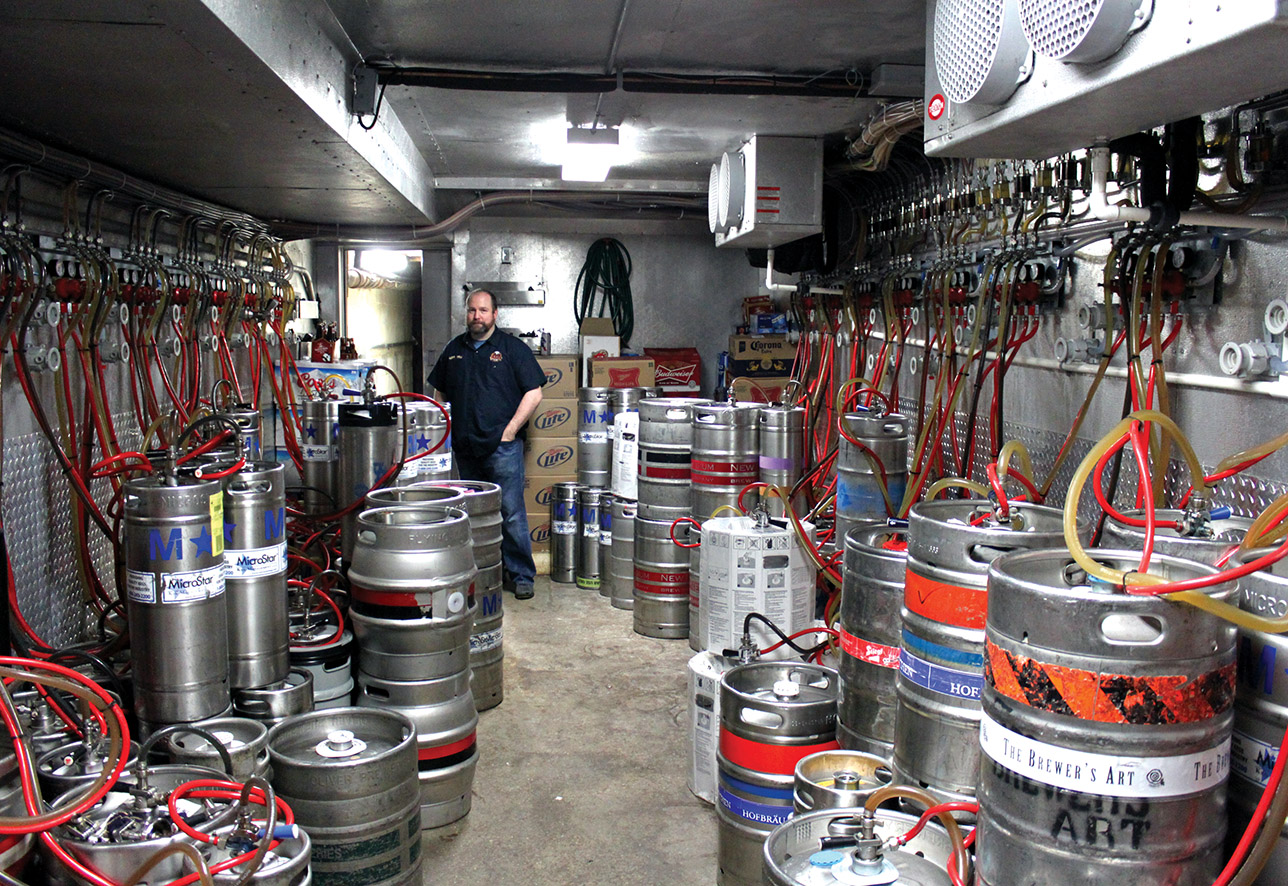 Casey Hard in the walk-through cooler at Max’s Taphouse in Baltimore.

Then there’s Max’s Taphouse in Baltimore, Md., which has 102 lines and 150 tap handles that serve three separate bar areas. Three years ago, the 338-square-foot cooler was rebuilt to include two sliding doors at either end (one side opens to the street where kegs can be delivered). Four glycol units each have two pumps, while an 80-gallon, 6-foot-tall gas tank just outside the cooler provides the pressure for 600 feet of line, while a nitrogen generator creates the gas from the air for the bar’s nitro taps.

The cooler rebuild also helped curb the 60 to 70 gallons of beer that was wasted biweekly during line cleaning thanks to an updated, in-house cleaning system. When it’s time to flush the system, nearly half the lines can be cleaned simultaneously, thanks to 48 plastic, interchangeable Sankey-brand hookups on the wall. Once the lines are attached, an automatically blended solution of cleaner and water is pumped through. The process is repeated until all the lines are flushed, which takes a good five hours and is done manually by three guys—all after the bar closes at 2am.

“It’s the same concept as if you were cleaning a pool,” says Casey Hard, Max’s general manager and beer guru. “The basic idea is that once we turn it on, there’s no refilling of tubes and tanks with cleaner. It blends itself in parts per million with the water.” The flushed beer is put into growlers, which are then sold the next day at a discounted price. “We were originally losing about 10 kegs of beer every other week,” says Hard. “We’ve probably cut that in half.”

The concept of meticulously clean lines isn’t lost on Lee Chase and Jeff Motch, who own the Blind Lady Ale House in San Diego along with their wives, Jenniffer Chase and Clea Hantman (respectively). With 26 taps and a short direct draw system (each line is about 6 feet long), lines are cleaned between every single keg change. Cleaner is put directly into a low-pressure pump that’s filled with water, so when the tap is opened, water and cleaner are pumped through, no pressurized cleaning keg required. When Lambics, hard ciders and other fruity, acid-forward beers are kicked, the line itself is simply replaced from a 500-foot spool in the back.

“The residual flavor just won’t come out of the line no matter how many times you clean it,” says Motch. “It’s awkward because we’re pulling through the wall of the cooler. We eat up valuable space to be able to build a direct draw system. And it probably wasn’t the best business decision, but for serving the beer it was the best decision.”

It’s a choice that brewers like Wachusett’s founding brewer Peter Quinn can appreciate. “From cradle to grave, all brewers want their beer to be as close to perfect when it gets to the consumer,” he says. Quinn, who’s been brewing for nearly 20 years, admits that he’s had subpar servings of his own beer at various bars. He favors under-counter kegerator systems because the short run results in the most pristine beer, although it certainly isn’t foolproof. “I’ve had small and large pubs that do an incredible job with short line runs and some that don’t,” says Quinn. “The key is making sure the beer sells.”

At Blind Lady Ale House, which opened in 2008, the perfect pour comes down to accessibility. Chase, formerly head brewer of Stone for nine years and a Great American Beer Fest judge, wanted to open a bar that was up to a brewer’s standards. That meant an all-stainless-steel setup with no lines hidden in trunks behind walls, ceilings or floors.

“There’s nothing particularly groundbreaking about it,” says Chase. “In a brewery, you have to get rid of hoses because they wear out, they take on characters and flavors. We can replace parts on a schedule or whenever needed. Our lines aren’t in a trunk line where they’re set there basically forever.”

The passion doesn’t end there—Motch explains that the patio at sister location Tiger!Tiger! is covered so that the sunlight won’t skunk patrons’ beer. “You can get crazy trying to protect it,” he laughs.

Chase comes up with his own analogy. “You wouldn’t put an art gallery together and then say, ‘Hey let’s save money on lighting.’ I care deeply about this. If you’re gonna put great beers on tap, you should give them respect.”

And, according to Olson, that kind of zeal is necessary. “There’s a lot of brewers and geeks out there, and we know the difference,” he says. “You owe it to your customers to do it correctly.” 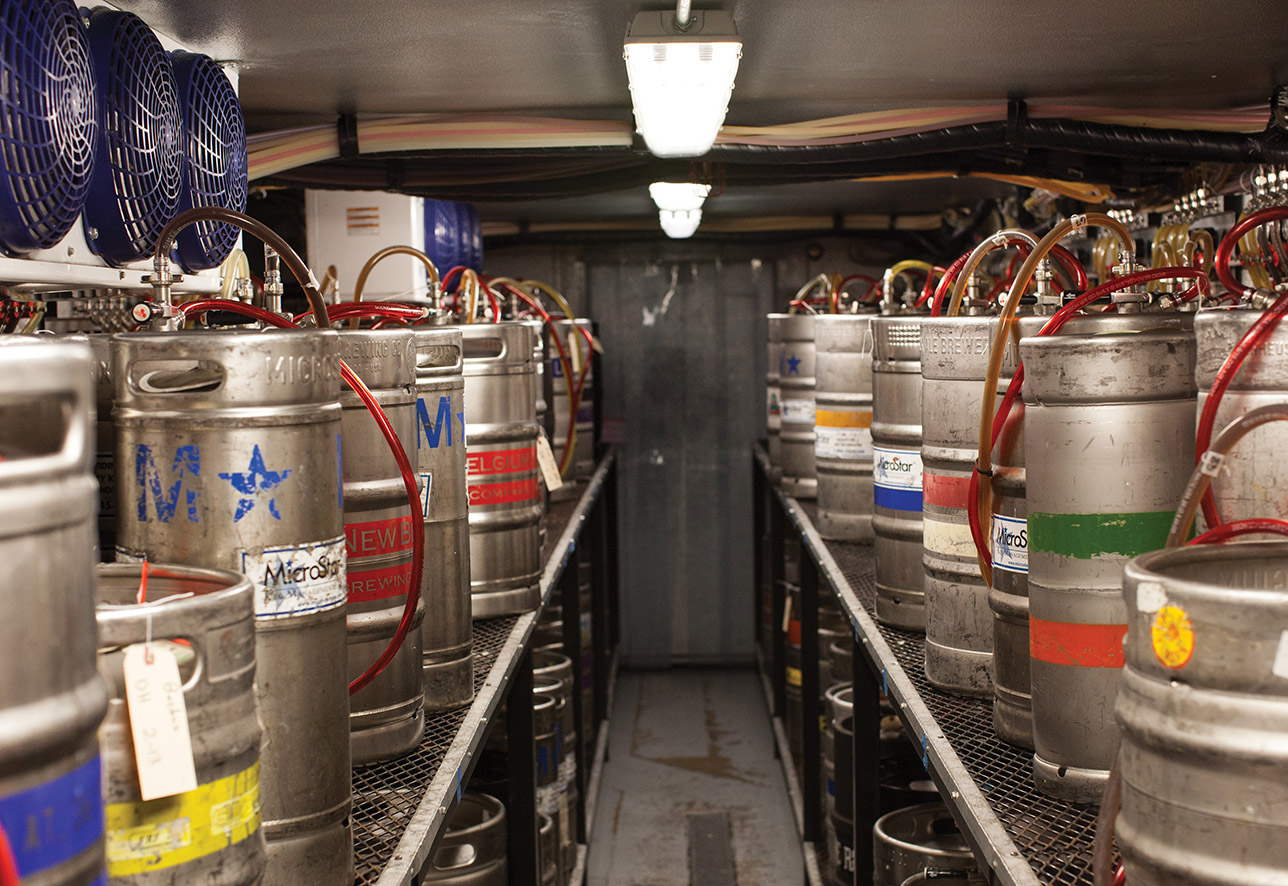 The Mayor of Old Town’s cooler. | Photo by Graham Thatcher

On the Beer Board
Once the stainless is installed and the system is tweaked to perfection, taphouse managers have to decide just what to pump through those lines every day.

“The hardest part is probably finding new beers every week,” says Casey Hard, the general manager and beer guru at Max’s Taphouse in Baltimore, Md. “My basic motto is I will give any brewery one shot,” says Hard. “We try to debut every new brewery that comes into the market. After that, I look at customer response, how well it sells and how long it’s been on draft.”

For Kevin Bolin, co-owner of Colorado’s Mayor of Old Town, “it’s about the abundance and making sure that everybody gets to try new and cool and different stuff and learn about it, versus saying, No, we have a lockdown handle and you can’t get to this one. That’s been Fort Collins for too long.”

Thirty of Bolin’s 100 taps are regulars; 70 are one-offs. “Since we’re going through them so often, you may have to wait a week, but you’ll probably get your beer on here if it’s a good beer,” he says.

Variety is also key for Jeff Motch, owner of Blind Lady Ale House in San Diego. “We’re pretty much all over the place,” Motch says, adding that it took a while for them to achieve a well-balanced beer board. “Even with 26 kegs at a time—and we have a capacity of 155—even with that, people will say, Wow, that keg’s been on for two weeks. That’s probably about as long as they last here.”

“Quality. It’s as simple as that,” says David Bailey, owner of Bridge Taphouse. Bailey says that they try to keep ciders, seasonals and light beers on tap so every customer can find something they want. “We have the 55 that are tapped but another 75 in a separate cooler waiting to go on rotation,” Bailey says. “We can replace with something new or similar even though it’s a similar beer. We always want to have that arc.” ■ 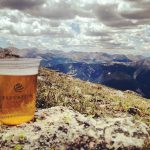 Previous: Brewing in Thin Air: What Alpine Breweries Are Doing at High Altitude 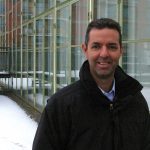