The Interactive Brewery: Breweries Extend Their Identities Within Their Communities 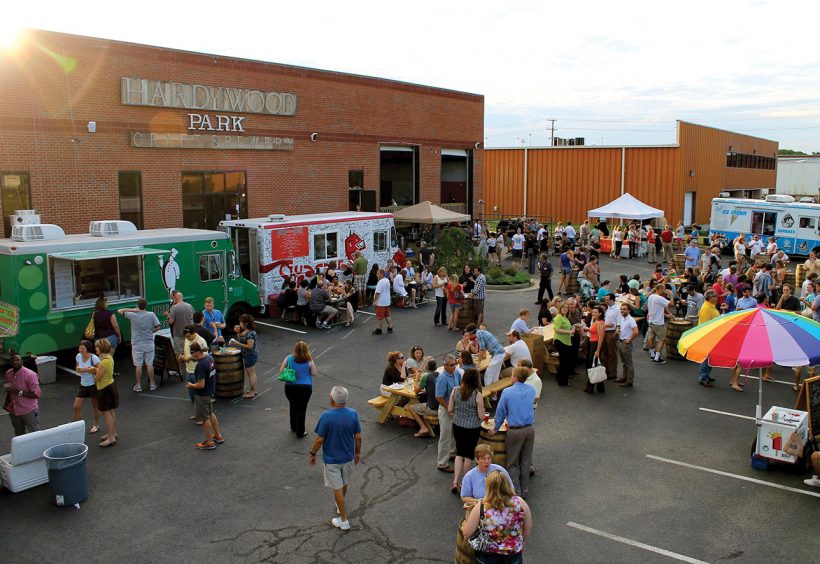 In the late 1800s, Cincinnati, Ohio, was home to over 30 breweries thanks to a steady influx of German immigrants. Huge warehouses were built with ample lagering cellars, and hundreds of thousands of barrels were exported by horse and cart and by barge down the Erie Canal. To top it all off, Cincinnati’s “Over-the-Rhine” brewery district was bustling with biergartens that served up home-cooked German food, delicious local beer and a fair share of polka. Doesn’t sound too far off from the American biergartens of today.

A good brewery is aware of the atmosphere it’s creating. They don’t just want you to stop in and check it off your list; they want you to hang around, ask questions, bring friends. And if they can get people to make the brewery a destination—for happy hours and on the weekends or for parties—they’re ensuring they have repeat customers. In essence, it’s all about community-building.

“It’s pretty rad to see over 1,000 people pack into a brewery to try something that you had a hand in creating,” says Nick Danger Walthall, lead brewer at Hardywood Park Craft Brewery in Richmond, Va. Last February, they invited Richmond rock band RPG to play on a stage next to the fermentors. “Our Heavy Roller Oatmeal Pale Ale was really popular with the crowd that night,” remembers Walthall. And despite the weather, the beer and music brought people out by the hundreds, many of whom had never visited the brewery before. “It was pretty cool because it was February, crazy windy and it had snowed earlier in the day, and we still had a huge day.”

Housed in an airy 12,000-square-foot warehouse, Hardywood is on track to put out about 5,000 barrels this year, quite the ramp up since they started brewing on a 20-gallon pilot system in 2011. Visitors hang out at picnic tables next to scores of barrels that used to hold wine, bourbon, tequila and rum; now they age beers like Hardywood’s Sidamo Imperial Coffee Stout and their Quadrupel-style Bourbon Cru.

Like many brewers, Walthall personally tailors his brewery tour because he knows it’s important not to alienate visitors. So if it’s a corporate crowd with little brewing knowledge, they’ll get more of an overview. If the group is a bunch of beer geeks or homebrewers, they’re treated to information on grain bills, specifics on barrel aging, amounts of hops and details about Hardywood’s yeast strains, which are propagated in-house. And if they want to help make the beer, Hardywood gives them hop rhizomes to plant.

“The hope is that people will harvest their hops and bring back any extra to us to help supplement our fresh wet-hopped IPA using all Virginia hops,” says Walthall. Last year, they gave out 1,500 rhizomes and expect a similar response this year. 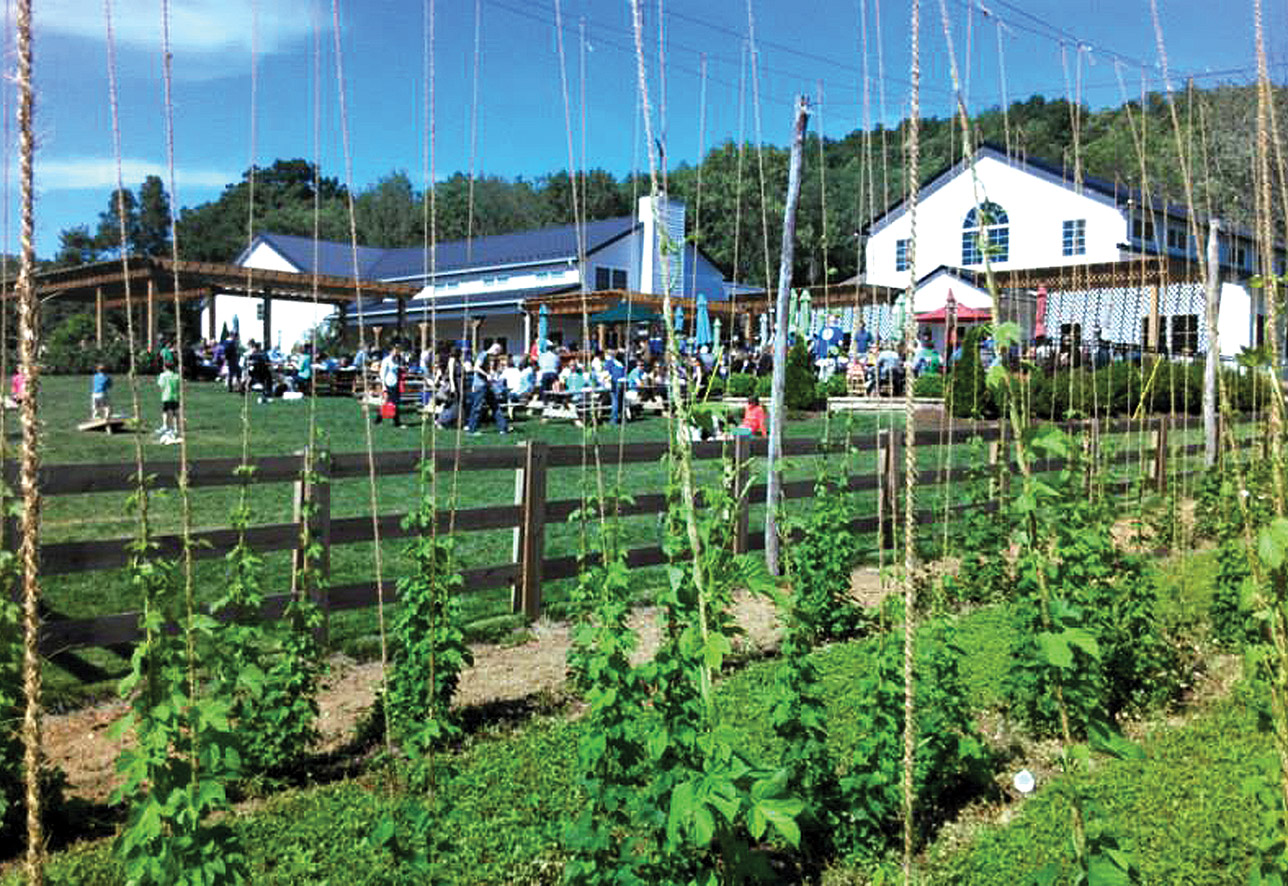 An hour down the road from Hardywood, in the Blue Ridge foothills, Blue Mountain Brewery co-owners Taylor and Mandi Smack and Matt Nucci have a hop farm of their own. Blue Mountain invites volunteers twice a year to get their hands dirty on their 1/3-acre Cascade hop plot. Two hours of hop-stringing in the spring or harvesting work in the fall will get you a free lunch. The customer thereby has a (resiny) hand in making the beer; not a bad way to generate buzz.

Opened in 2007, Blue Mountain Brewery is the oldest craft brewery in the county and has helped transform the region. In 2012, the team opened Blue Mountain Barrel House, which also has a half-acre Cascade hop farm, just a half-hour away. Nucci says it’s refreshing to meet customers that have learned about the brewing process and their products. Sometimes it’s surprised him how knowledgeable they’ve become. “You can stop any tractor driver holding up traffic on the road here and ask them what’s in our IPA, and they’ll know,” he says. “I’m not joking.”

Once only known for its vineyards, Nelson County now boasts Blue Mountain, Devil’s Backbone and Wild Wolf—all reputable Virginia breweries today. And community outreach is something they all push. They invite in local musicians, collaborate with local businesses, and feature local ingredients like Virginia malt, Virginia bourbon barrels and Blue Ridge Mountain hops.

Earth Eagle Brewings—a nanobrewery in Portsmouth, N.H.—had something plenty of breweries lack upon opening: a built-in customer base. Last November, brewer Alex McDonald expanded his popular homebrew shop to include a 1-barrel nanobrewery that features recipes using the most unorthodox of ingredients like mandrake root, chaga syrup, cherry bark and yerba santa.

Though he brews beers like his New England Gangsta IPA, it’s his herb-infused Gruits that have attracted lines of locals and crowds up from Boston to try Earth Eagle’s eccentric brews. Some patrons swear by the beer’s healing powers. One man returns weekly to fill up his growler with one of McDonald’s Gruits. He is convinced it’s curing his hernia. Whether or not they heal, the Gruits have been key to Earth Eagle’s success: The customer walks out having tried something new and is bound to tell their friends about drinking a medieval beer style.

Brian Benchek is another brewer who came upon his success organically. Initally, Bencheck wanted to open a brew-on-premises nanobrewery in a suburb of Cleveland. The concept had fared well in the few places that did it, so why not try? But when Benchek and his partner opened the doors to BottleHouse Brewing Company, the response was overwhelming. Their neighbors started pouring in, making themselves at home, and ordering beers. So they put off the brew-on-premises idea and started serving food, hosting open mic nights and inviting customers to bring their kids (and their own food, too).

“We do knitting nights and painting nights where 20 to 30 people come in with easels, and they drink and paint,” says Benchek. “I think that twenty- and thirtysomethings are looking for things that are authentic. The community brewery is just that.”

Kim Elsham, communications specialist for Revolution Brewing in Chicago, echoes that sentiment. Revolution hosts about 40 charity benefits a year at the brewpub, and they donate to 80 other nonprofits throughout the year. “Beer by its nature is a communal thing,” Elsham says. “People get together to enjoy beer, the brewing process is a group effort, and beer is a drink of the common people. We make beer to bring people together and often find ourselves in the middle of celebrations and important causes. Our customers also expect us to give back and many of them work for and with the organizations that we support, which is how we make a lot of our connections.”

Then there’s The People’s Pint, a 15-barrel brewpub in Greenfield, Mass., which has made it a priority to live up to its name. They pay 10 cents for every mile you ride on your bike. Tally up the week’s total, and cash it in at the bar. “That’s for anyone, not just employees,” says head brewer Chris Sellers. “The more you bike, the bigger your tab.”

Sellers uses local ingredients for every beer that makes up his 900 annual barrels. That’s because he was floored three years ago when he found local malted barley that imparted “an earthy, herbal character that was very nice, just not what you’d expect.” He realized it was “literally the terroir of the valley, specific to this area.” And it all came from fields just 20 miles—or a half-pint’s bike ride—away. ■ 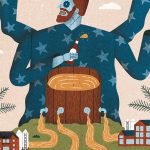 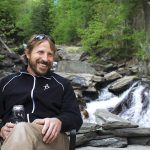